Public may help by participating 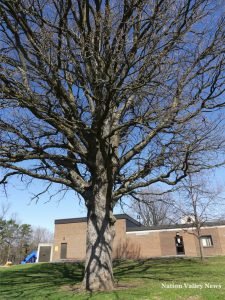 CHESTERVILLE — The roots of Chesterville Public School’s living symbol sprouted before Confederation. And now the old bur oak tree, a playground feature for generations of pupils, is set to be recognized.

Local arborist Dave Buttivant couldn’t help but notice the grand tree one day when he was dropping his children off at school.

“It’s amazing this tree is still here considering Chesterville was built as a mill town in the late 1800’s,” said Buttivant. “Not to mention it survived the ice storm and tornadoes.”

With a measured diameter of 135 cm, Buttivant estimates the giant tree at 150 to 200 years old.

He and the school’s principal, Toby Sebalj, are seeking protection for the historical tree through the provincial program overseen by Forest Ontario.

In honour of Canada’s 150th birthday, the not-for- profit organization will select 150 trees across Ontario for heritage tree status.

In order to achieve the recognition, “trees either need to be prominent in the community, attached to a historical person or event, or be growing on land that has historical significance,” explained Buttivant, a tree assessor of 10 years associated with Eastern Ontario Arborists Inc. and TreeFeed.ca.

“The trees need to be assessed on age, size, form, shape, rarity and distinctive features. After the nomination process, a heritage tree assessor will confirm if the tree is qualified or not,” added the Chesterville resident. 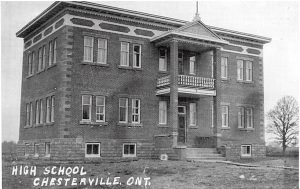 Chesterville Public School’s oak tree can be seen at right in this 1911-1913 shot of the former Chesterville High School that once occupied the south side of the school property on College Street.

Protected by provincial law, a heritage tree can’t be cut down, he said, and is protected by minimum setback requirements for any new construction to protect its root system.

Buttivant and Sebalj have teamed up on the project and are hoping to get the community involved. They are searching for any photos or stories that Chesterville-area residents may have about the old tree — anything that will help prove it’s historical significance or exact age.

A binder full of material was previously assembled as part of a “noteworthy tree” initiative, years ago.

All photos and information need to be submitted by a May 30 deadline. Buttivant hopes to hear back from Forest Ontario by July 1.

The tree has become CPS’s majestic mascot and symbol through the years.

“We’re known as the ‘Mighty Oaks.’ We have a painted mural of the tree on a wall inside the school. Our Character Always Award recipients have their pictures taken and the pictures are pasted on leaves on the branches of the tree [mural],” explained Sebalj.

The tree has shaded children for decades, and today’s advocates hope the community comes together to preserve its history.

“It’s got stories to tell if only we could hear them,” said an emotional Sebalj.

One important clue on the tree’s age is a 1911-13 postcard showing the former Chesterville High School (since demolished) that once stood on the south side of the CPS property. The oak appears in the photo, already looking quite mature. Buttivant estimates it was 70 to 100 years old by then.

Former CPS principal Bob Gilroy, who grew up in Chesterville, said the tree was a fixture of his lengthy tenure at the school, “from age six to 55,” he quipped.

On his retirement day in 1996, “I could think of nothing better than to invite the children out for ice cream under the oak tree,” Gilroy recalled of his final day as principal.

He shuddered to walk up College Street in the aftermath of the 1998 ice storm, he recounted, thinking of the damage that must have befallen the beloved bur. “But only the finest branches at the top” of the crown showed any breakage, he said of the resilient tree.

Anyone with information, stories, or photos is asked to submit them by email to dave@treefeed.ca before May 30.

Below are vivid examples of how Chesterville Public School has made the oak tree part of its own in-house culture and symbolism. 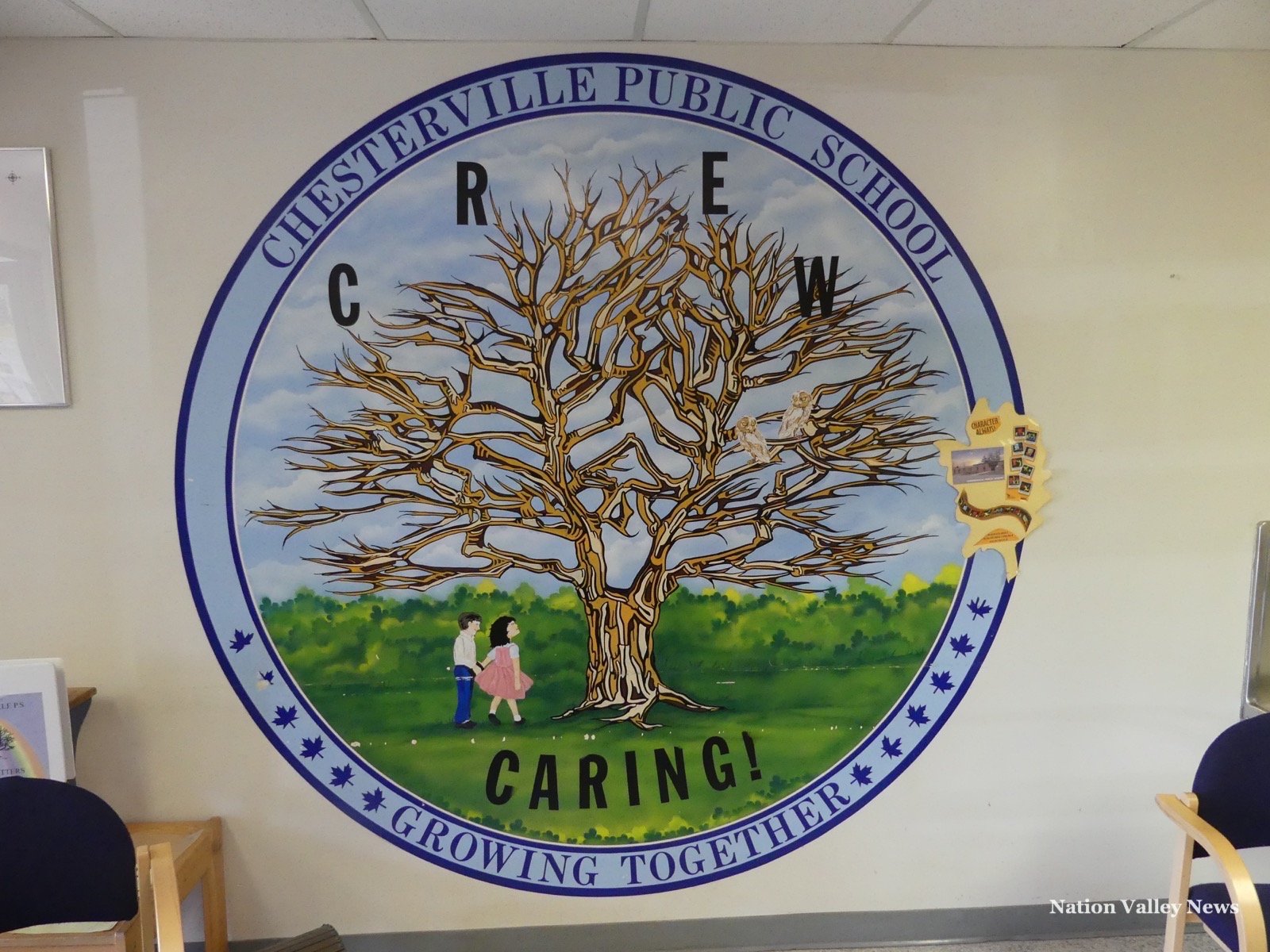 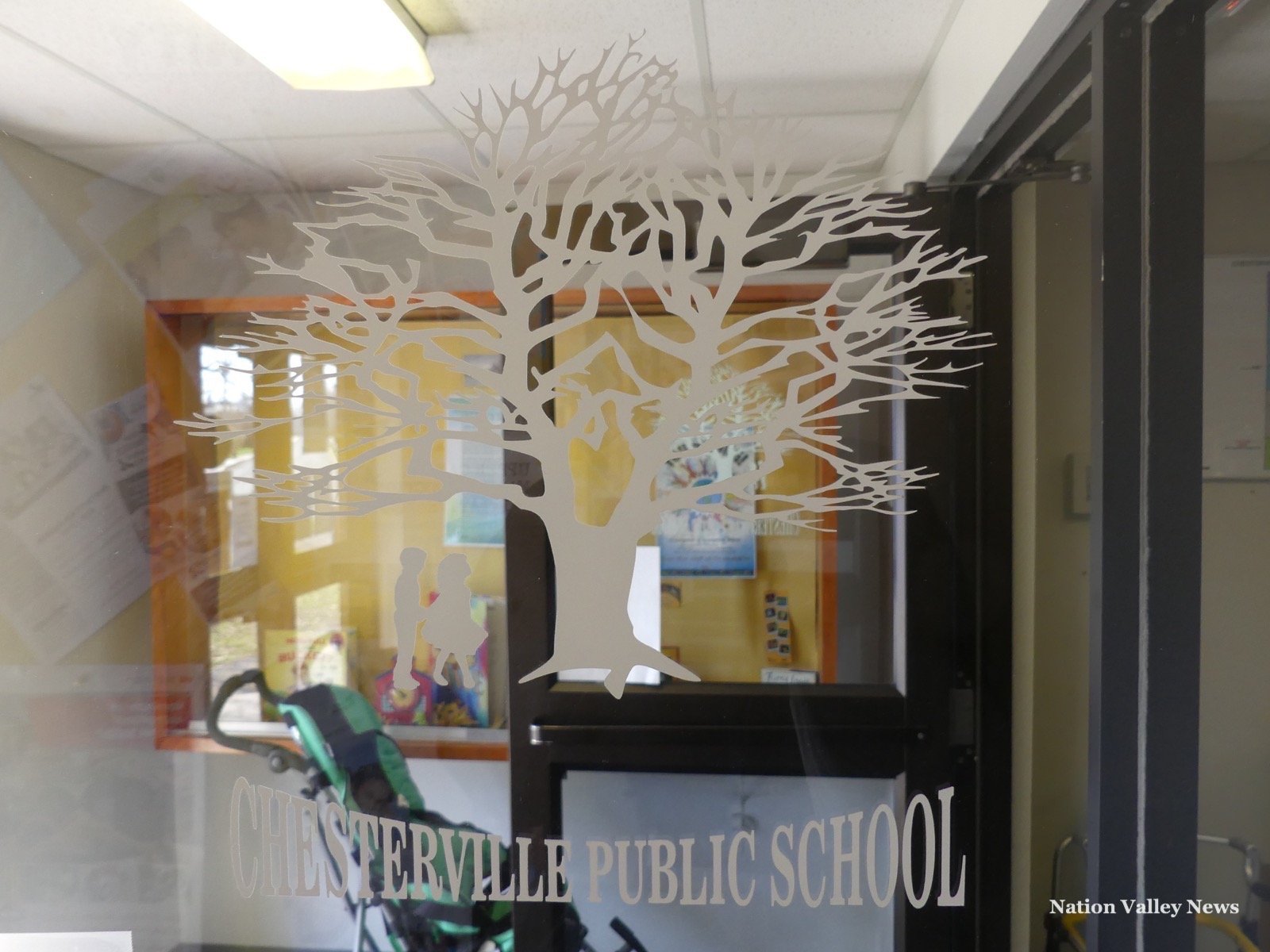 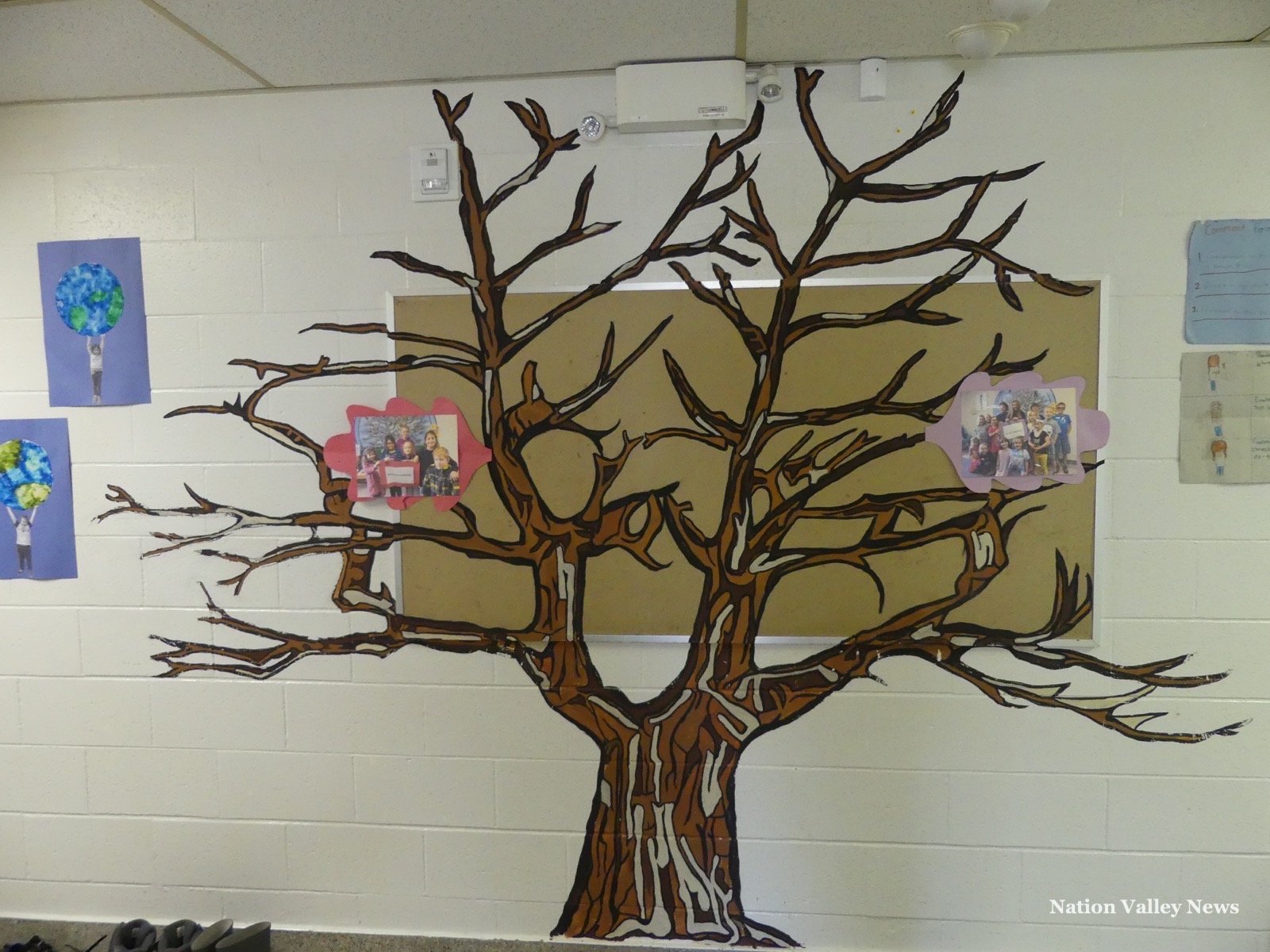