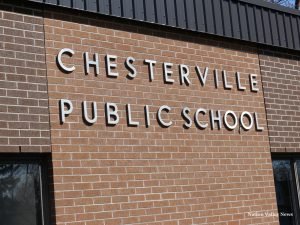 CHESTERVILLE — It’s that time of year again— time for parents to make the sometimes emotional next step and enroll their children into kindergarten.

And Chesterville Public School is holding its own these days in the local competition to win over the next generation.

Yesterday, the College Street school held its annual kindergarten orientation day, where a whopping influx of 37 families signed up 38 junior kindergarteners for the coming school year.

“Look around you. These are the 37 families that you will be a part of from here on out. This is the Grade 6 graduating class of 2025,” observed an emotional Principal Toby Sebalj. “We are truly blessed that these 37 families are trusting us with their children. It’s just amazing,” she added as the young prospects enjoyed several stations and activities, including reading area, playdough table, magnetic block station and a healthy snack. Members of the incoming youngest class even received the ever-popular ‘first school bus ride.’

It wasn’t always this way at CPS. In recent years, the school suffered an outflow of students to Winchester Public School after the Upper Canada District School Board’s initially exclusive rollout of French Immersion to the other village nine years ago.

“There were 111 students here the year that I started,” recalled the Chesterville principal of her 2011 debut.

Today, the school’s population stands at 147. And it’s projected to be 165 next school year, given the surge in kindergarten enrollment for 2017-18.

Sebalj traces the “incremental” turnaround to the arrival of dual-track English and French Immersion education at CPS, which started September 2015 in JK through Grade 3. The continuing phase-in means that French Immersion will reach Grade 5 in the upcoming school year and be available through the final level, Grade 6, in 2018-19.

So robust is the school’s population growth now, Sebalj plans to put in a request for a portable. “We need to get another classroom,” she exclaimed.