Main Street North in Chesterville will be closed between Queen Street and this intersection with King Street, July 26. Smith photo, Nation Valley News

Where Ottawa will close Wellington Street to feed shishi fare to 1,000 people on just one date in August, this township beats the urbanites to the punch with ‘Meet Me On Main Street’ — in Morewood (July 5), South Mountain (July 13), Hallville (July 19) and Chesterville (July 26). The local outdoor dinner-on-the-asphalt series concludes with a grand finale Aug. 2 in Winchester, seat of local government.

A section of the main drag in each town will be shut off to traffic to accommodate tables and chairs on the street in lieu of cars.

North Dundas admittedly borrowed a page from the Aug. 27  ‘Canada’s Table’ event in the Nation’s Capital — if not quite the high-brow menu. Where Ottawa’s version extolls fine-dining and visiting chefs, the diners in North Dundas will chow down on stick-to-your ribs all-Canadian options like poutine, beef on a bun and otter tails.

“I think it’s a great idea,” Mann said of the street-party concept inherent to both Canada’s Table and Meet Me On Main Street. Township staff recently came up with the name of the local edition.

“We’re literally setting up a string of tables and chairs in the middle of the street, and every venue will have a food provider,” Mann says.

Buy a meal and refreshments — or just show up to catch the free live entertainment on any or all of the dates, 5:30 to 8 p.m. Hillbilly Highway (first two nights), Sons of Gord, Marleen Fawcett and Furious Gord respectively play the five scheduled evenings.

The township has budgeted $3,000 for the festivities.

See the official Facebook event page for precise details on the streets being closed. 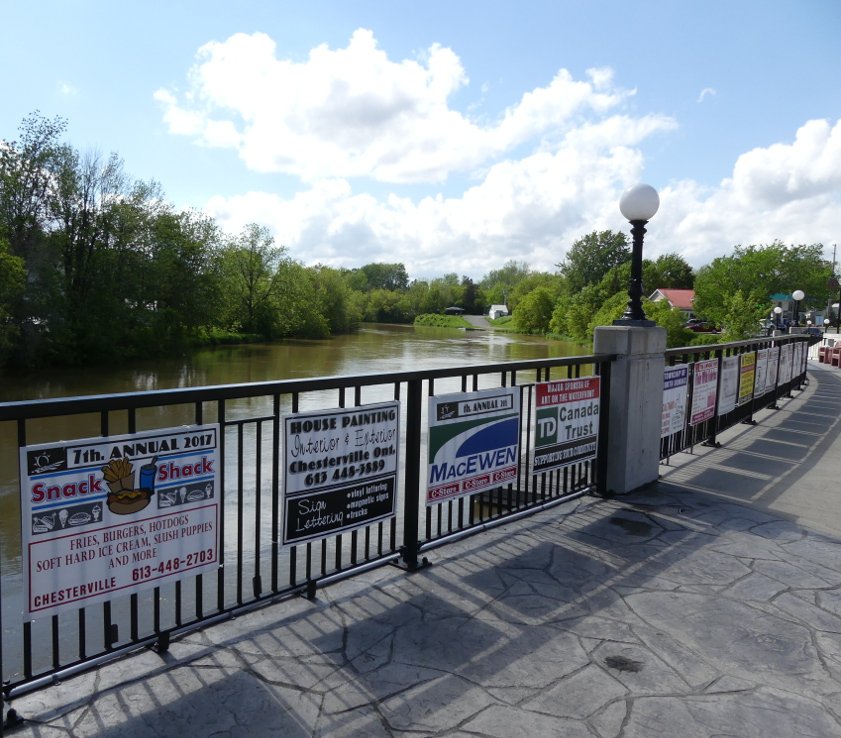 The waterfront along Chesterville’s Main Street North, hub of this weekend’s Art on the Waterfront activity and one of five ‘Meet Me On Main Street’ event venues later this summer. Smith photo, Nation Valley News