WINCHESTER — The North Dundas Rockets have a welcomed a new head coach as well as a new head of player development and recruitment.

Former Hawks captain Nik Paas replaces James Kirkwood as coach. “We would like to thank James Kirkwood for guiding the ship the past two seasons and wish him all the best,” said Rockets General Manager Rob Sadler, long-time friend and former Hawks teammate of Paas’s.  “James felt that his new career path is going to limit his ability to commit to coaching unfortunately.”

Doug ‘Torchy’ Barnett assumes the other key position as the Jr. C team prepares for the 2017-18 season.

For Paas, it’s a return to the organization.  A former Jr. B MVP who went on to be drafted by the Junior A Smiths Falls Bears during his playing days, the Winchester resident spent a couple seasons as an assistant coach in the early stages of the Chesterville-based Jr. C team.

“As general manager, I am thrilled and relieved at the same time that Nik is willing to come back on board in this capacity,” said Sadler of the new head coach. “Losing James left a big hole for us to fill, and the list of candidates that I wanted to target as a replacement was short, Nik being at the top of that list.  Nik has a great demeanor to be a coach in our league; he will bring character, knowledge and a degree of professionalism.  I feel that he and [assistant coach] Lenard [McLean] are going to be a great team this season.”

Barnett’s hockey pedigree includes playing Junior A in Gloucester and captaining the Jr. B Kemptville 73s, a team he returned to serve as head coach. A former director of the Rideau St. Lawrence AA Kings, he’s touted for a wealth of experience and connections in the hockey community. The Rocket’s new head of player development and recruitment is  “a great asset to have and I am looking forward to working with him,” the general manager remarked.

The team has also announced the signing of Brodie Barkley. A “real nice addition to our back end,” Barkley “will be one of the premier defensemen in this league, and another local kid on the roster for the 2017-18 season,” said Sadler, adding the team has “a great nucleus returning” for the upcoming campaign.

This season’s squad is set to begin conditioning camp later in August, with rosters for exhibition games — including two scheduled home games against Morrisburg and Metcalfe — to be chosen out of camp.

Sadler encourages youngsters in the community to attend camp. “We are a locally focused organization, and if you have any interest in playing for the Rockets, this is the starting point,” he said.

Cost of camp is $75 for three ice times. Registration online or at the door.  Any questions may be directed to Sadler directly at robsadler15@outlook.com or (613) 809-5771.

To go along with their new coach, the Rockets will sport changed-up new jerseys this season. Based on the Ottawa Senators’ design, the jersey’s have been funded by the Winchester Lions Club‘s $3,300 contribution. 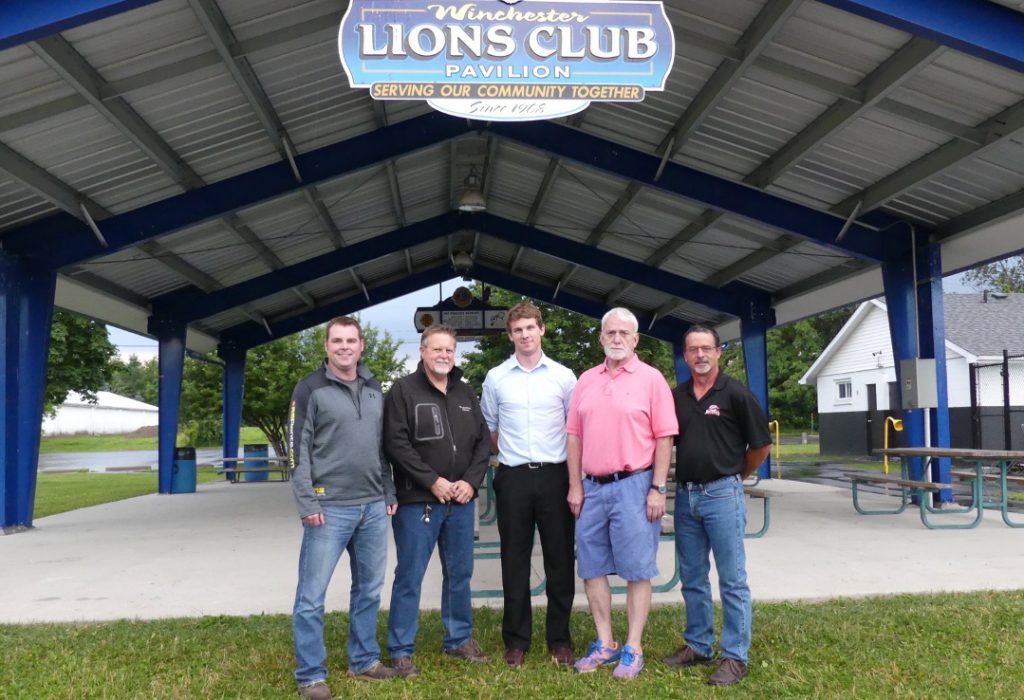 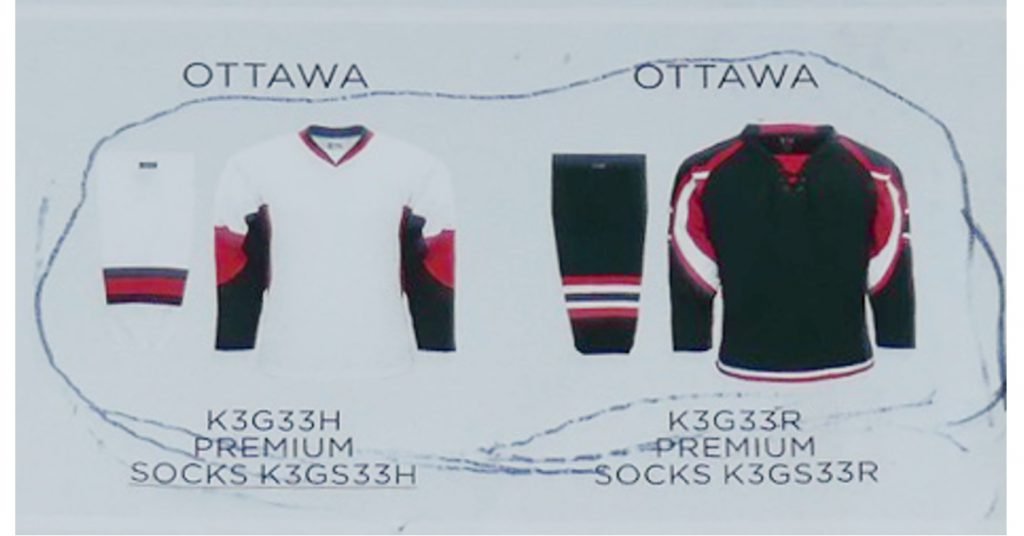 The North Dundas Rockets have selected this design for their new jerseys — the first change since Jr. C’s return to Chesterville several years ago. Zandbergen photo

Advertisement — Flair with Fabrics has Canada 150 in the bag

In a patriotic mood with the approach of Canada’s sesquicentennial? See Flair With Fabrics in Chesterville for a variety of all-Canadian projects and materials to fully occupy quilters and sewers for the balance of this Canada 150 year.