This car ended up in the centre median of a new Long Sault roundabouts after jumping the curb, Nov. 17. A passerby, Nathaniel Wilson of Cornwall, called an ambulance for a female passenger in her 80s who complained of back pain. Courtesy photo by Nathaniel Wilson

LONG SAULT — SDG officials are waiting to learn the cause of a single-vehicle crash at one of Long Sault’s new — but still unfinished — roundabouts last Friday night.

The Nov. 17 incident occurred shortly after 6 p.m. on the more westerly of the two roundabouts constructed on County Rd. 2 at the South Stormont village this fall.

The westbound car was badly damaged after running into — and then jumping — the east side of roundabout’s centre concrete curb, according to witness Nathaniel Wilson.

“I was there about 30 seconds after the crash,” Wilson told Nation Valley News on Facebook Messenger on the weekend.  The vehicle “was still filled with dust from the air bags” when he arrived on scene, said Wilson, who called an ambulance for the elderly female passenger.

In an earlier Facebook post, Wilson estimated the car had gone “airborne for about 12 feet.” The driver reported his speed at 40 km/h and “his 86-year-old mother was in the passenger seat complaining of back pain,” the Cornwall resident wrote. “The OPP was also complaining about the lack of lighting.”

Wilson’s photograph (see below) of the smashed car was taken while he faced north, with the Long Sault MacEwen’s gas station to his left.

In an email, United Counties of SDG Director of Transportation Ben de Haan said he was “anxious to learn”  the incident’s “underlying cause” — though he conceded that lights, line-painting and permanent signage remain “outstanding items” at the roundabout project sites in Long Sault.

They’re “still under construction,” de Haan pointed out, with paving only finished earlier on the day of the crash. “Although the weather isn’t helping, we were scheduled to be substantially complete by the end of this week,” he said.

The $2.2-million roundabout project broke ground in Long Sault in August. They are the second and third roundabouts undertaken by SDG on County Rd. 2. The first, in Iroquois, was completed earlier this fall at a cost of $1.3-million. 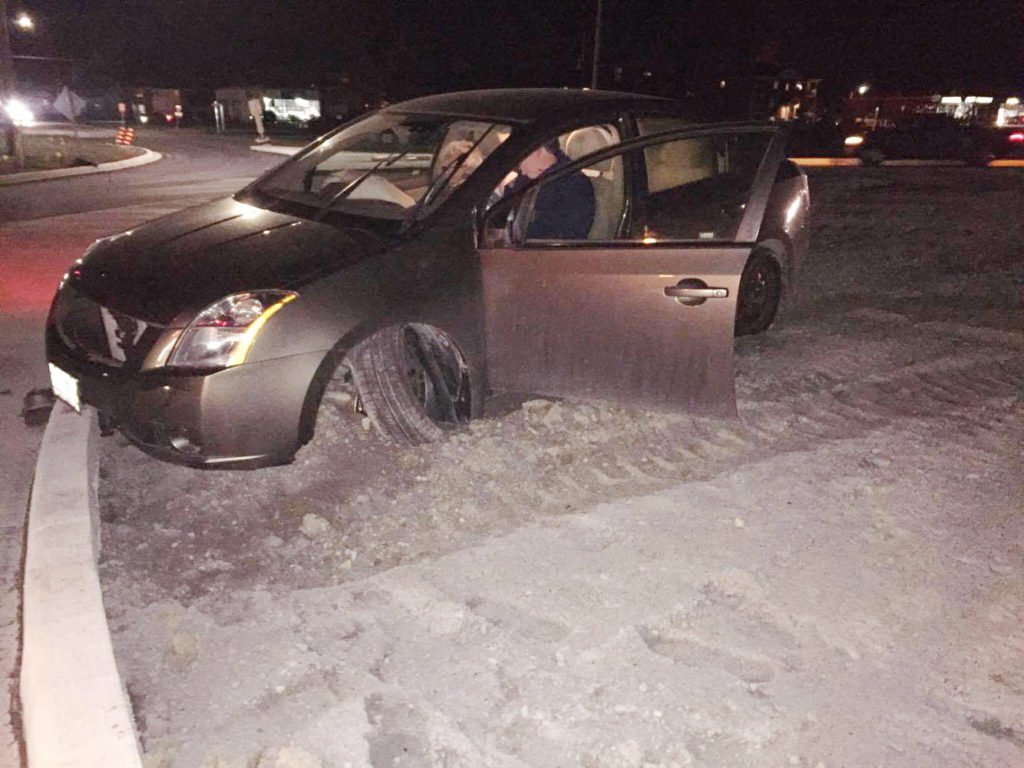 The footage below shows an eye-popping example of driving straight into a roundabout median, as published by The Telegraph in the UK. The British video tends to appear during local social media discussions about roundabouts, and the online reaction to the Long Sault incident was no exception.