Some of the crowd on hand to see Colin James and Emma-Lee in Finch, during the CP Holiday Day train stop, Monday. Zandbergen photo, Nation Valley news

The train made its third annual stop in the North Stormont village on Monday afternoon, and while the crowd was down somewhat from the previous two appearances (which both fell on Sunday), the audience was big enough to audibly roar for the artists on their whistle-stop performance aboard the train’s all-Canadian edition. (CP also runs an identical train that travels through both Canada and the U.S.)

The first Ontario stop on the 20-day journey across Canada, Finch is one of 170 communities (in both countries) selected by Canadian Pacific for a 45-minute visit by the company train.

Now in its 19th year, CP’s Holiday Train serves as a fundraiser for food banks along the route, and Community Food Share again benefited from that largesse. This year’s cash haul came to $5,533 — including $4,000 from CP itself, $1,431 in donations collected from the audience, plus $102.50 in canteen sales. The organization also took home 1,072 lbs of food.

“I was very pleased with the attendance,” observed Community Food Share Administrator Ian McKelvie on the weekday timing of this year’s stop. ” I had no idea what impact a Monday afternoon stop would have. I thought it was a great turnout for a weekday. Several parents told me they took their kids out of school to be there,” added McKelvie, who again collected a big cheque from the train company on the same stage used by the visiting stars.

“Would we prefer a weekend stop? We sure would. And an evening stop? That would be fantastic. However, Community Food Share is very fortunate to be a beneficiary of the CP Holiday Train experience for three straight years. CP has donated $9,000 in that time plus we’ve received thousands of pounds of food and cash donations from area residents.”
Regarding this year’s change to a Monday stop, CP media relations advisor Mallory McCredie explained the train has “a lot of ground to cover and wouldn’t be able to accommodate our schedule of 171 stops if we only did evening events or events on set days year after year.”

In the same email to Nation Valley News, McCreadie added: “With so many communities, it is always a challenge for us to determine the routing and schedule for the trains, but we try to vary the stops from year to year to accommodate as many locations and food banks as possible.

“We are thankful to all those who came out to support the local foodbank and those in need this holiday season, for this is what the CP Holiday Train is truly about.” 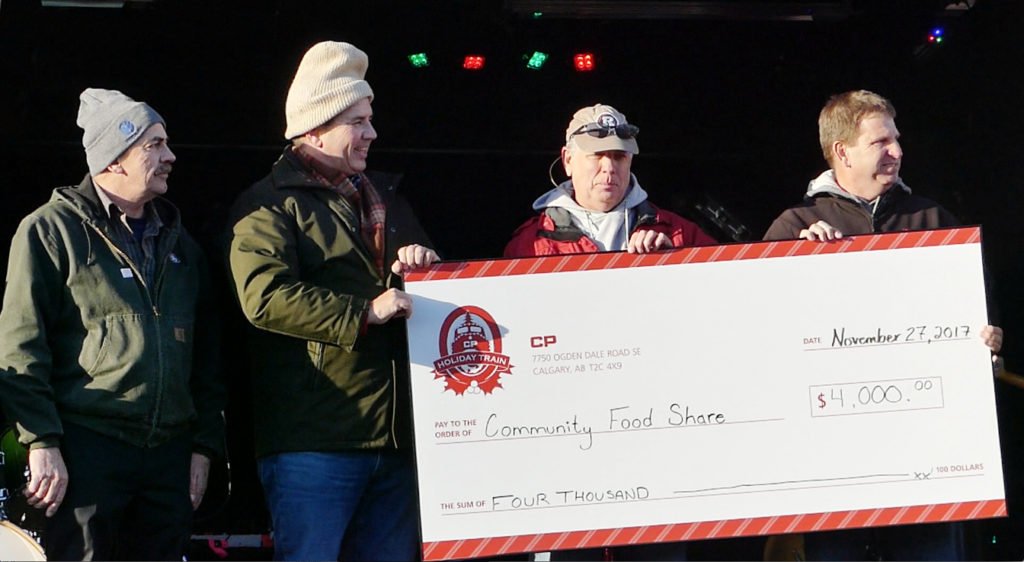 Above, a gallery of photos from the event supplied by reader Brian Mcrae.

More photos of events in Finch.


Emma-Lee performs in the video footage above.

CP hands over its $4,000 donation to Community Food Share, above.

Have an event to publicize? Link it here on Nation Valley News where people will see it! Inquire: 613-454-5284

Share a message about your baby’s first Christmas with Nation Valley News!