Janet St-Pierre points to the crawl space window beneath her dining room, where an active — and malfunctioning — septic system causes her Dunbar home to smell like sewage. Zandbergen photo, Nation Valley News

Janet St-Pierre bought her Dunbar house for $210,000 just over two years ago, purchasing the County Rd. 7 property, she says, from a renovator who had extensively fixed over the handsome brick structure. But not long after she and her partner, Robert Marion, moved into the place, the powerful odour of sewage began permeating the house — emanating, says the yoga instructor, from under her dining room floor. 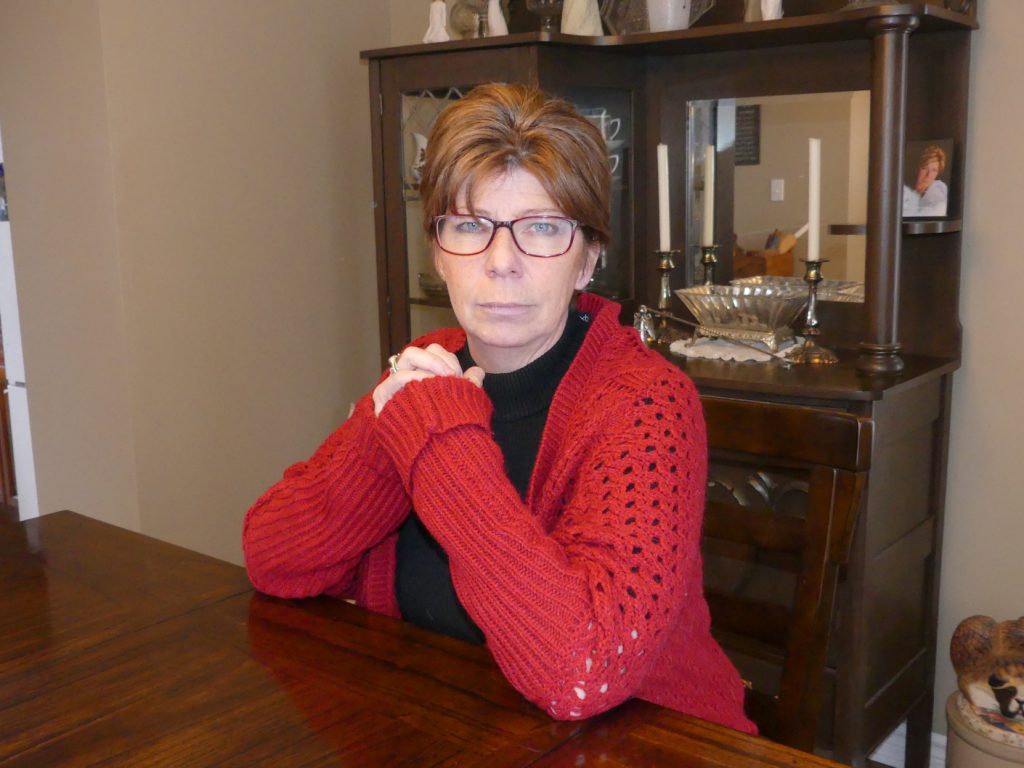 The home’s concrete septic tank — possibly failing — is entombed beneath the crawl space. Marion estimates the tank was put in about 50 or 60 years ago, buried right beside the home’s main foundation. At some point after that, the dining rom addition was built onto the house — over top the buried septic tank — a project likely contravening the Ontario Building Code of any era.

Likewise, a stone’s throw away, the detached garage was erected on top of the septic system weeping bed, again some time ago.

Both of those projects likely occurred during the time of the old Williamsburg Township, which should have been issuing building permits for work complying with the Code.

Today’s result finds St-Pierre and Marion living amid beautiful, recent renovations while immersed in an unpleasant stench “80 percent of the time,” she says. During an early March interview with Nation Valley News, the odour was muted and masked with essential oils she keeps around the house.

While she concedes the location of the tank was identified before she bought the place, she says it didn’t smell during pre-purchase visits, and she insists the system was inspected and passed by an area septic system company in October 2015 prior to purchase. She says the firm recommended adding “risers” — to make it easier to pump out the tank — and gave her a document she says satisfied the mortgage insurance requirements of the Canada Mortgage and Housing Corporation. “Now they’re saying they didn’t pass it or fail it,” remarks St-Pierre, who estimates her lawyer bills at $10,000 so far.

Installing an entirely new septic system elsewhere on the property will cost about $40,000, according to estimates St-Pierre says she’s received. She believes the insurance company of the original septic inspector should pay for it.

By the early spring of 2016, “I couldn’t even stand outside for the smell coming through the wall of the crawlspace,” she exclaims.

The home had sat empty “for years” until the last owner — described by St-Pierre as a “non-local” house flipper — renovated and sold it to her.

A home inspection was conducted on St-Pierre’s behalf by her own real estate agent, says the former Cornwall resident. “The listing real estate agent told me it was professionally restored,” she adds.

When her septic problems emerged, she began searching for evidence of building permits issued by the Municipality of South Dundas on all of the recent work — but says she found none. She also discovered that one’s lawyer — at the time of a home’s purchase — typically searches for “open” municipal permits — which won’t catch issues arising from work done without permits in the first place.

“The very first winter here, the pipes froze,” she says, adding she has electrical concerns after discovering an open permit with the Electrical Safety Authority.

When she approached the municipality about the lack of municipal permits — hoping she might find some relief through her title insurance — she says she was visited by municipal officials who refused to issue work orders and cautioned her that building permits are “a can of worms.”

She says a Toronto-based official with Ontario’s Ministry of Municipal Affairs has advised her to take legal action against South Dundas.

She hired a septic design company, she says, at the recommendation of South Nation Conservation (SNC), which handles septic issues on behalf of the municipality. At a cost of $1,200 a representative of that company “confirmed the septic field is under the garage,” she says, adding that SNC also collected $600 for a new septic permit. Her lawyer has since met with SNC officials, she says.

She also worries the septic system could seep onto her neighbours’ properties. The Eastern Ontario Health Unit has advised her that she will be treated as the responsible party if that’s the case.

She and Marion take infrequent, short showers for fear of worsening the situation — all the while living in a mortgaged home that stinks.

“I did my due diligence to protect myself” before buying the home, she insists. “Now everybody else is protecting themselves.”

“Who the hell has authority? rhetorically asks St-Pierre, who has also contacted the office of the Ontario Omnbudsman. “Everybody’s passing the buck. Nobody’s responsible, except for me.”

Above, an interview with Janet St-Pierre on her septic-system predicament.