WINCHESTER — A night full of cheese, wine, and laughter all for great causes at the inaugural 100+ Women Who Care North Dundas. The big winner of the night was the Dundas County Hospice who hit the jackpot by receiving their full $10,000 requests at both North and South Dundas events.

Board Chair for the hospice, Paul Renaud was nearly speechless about the win. “We’re extremely pleased. We are grateful to the community for thinking about us.”

He then thanked the women in Dundas for their generous donations.

“I’m overwhelmed, and looking forward to next year, and being about to share with everyone the difference that their donations have made.” Renaud concluded.

Habitat for Humanity acquired their full pitch for $8,000 as second place winners.

Breckyn Fowler, Resource and Volunteer Coordinator for Habitat for Humanity, was elated receive her full request amount. “We got what we asked for! It’s just proof that the county is 100 percent behind this project!”

The Winchester District Memorial Hospital (WDMH) requested $7,500 and were awarded with $2,000 and third place.

“Wow! This is what it must feel like to win the lottery!” exclaimed Kristen Casselman, Managing Director for the WDMH Foundation.

“Thank you all so much! It’s amazing that because of the Women Who Care, we are well on our way to getting the right tools for our obstetrical nurses sooner rather than later!” she said.

“For those who are curious, we intend to apply for several grants to get the remainder,” Casselman added.

Diane Crummy, Chair for the North Dundas chapter also announced some big news. A men’s chapter, 100+ Men in North Dundas Who Care, is set for the fall. Stay tuned for details as the fall approaches.

First place went to the Dundas County Hospice, as previously mentioned. There was a tie for second place. Morrisburg Public School and First Responders both walked away with $3,350. 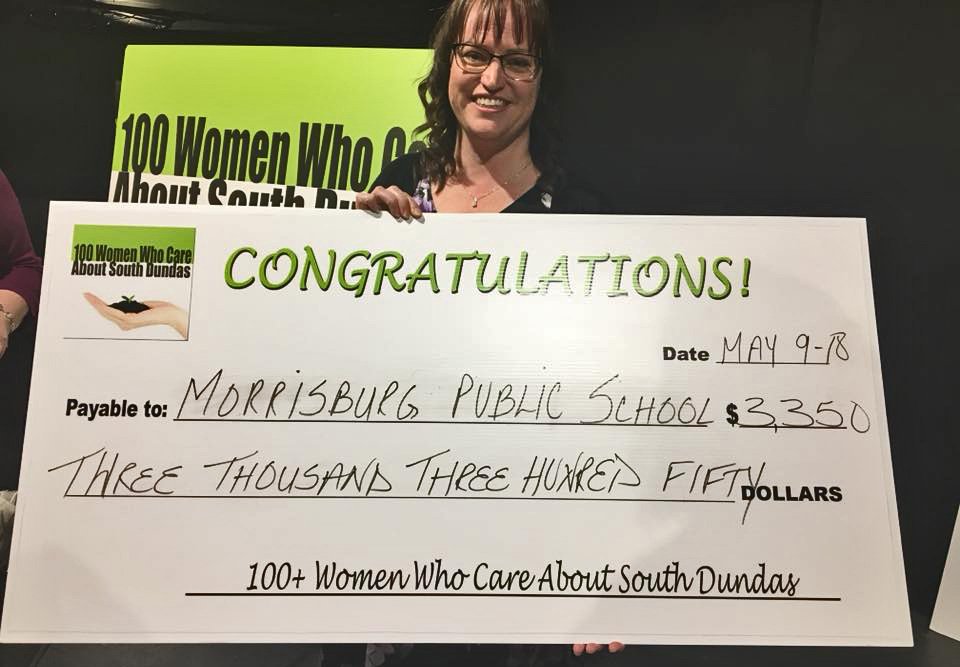 Seen in image above: Tied for second place with First Responders, Morrisburg Public School was awarded $3,350 at Wednesday night’s 100+ Women Who Care About South Dundas event. Sarah Barclay-Thomas, Grade 5/6 Teacher at Morrisburg P.S. accepted the award on behalf of the school. Courtesy photo

There were 167 women in attendance and a total of 176 registered for the event. The remaining monies form women who were unable to attend continue to be collected and will be divided evenly between the two second place finishers.

Janeen Wagemans, Chair of the South Dundas Chapter wanted to reassure the public that although the hospice claimed first place at both events, there is a rule that the money must go towards two separate projects.

Same goes for next year.

If the same charities apply for donations, they must only pitch for a completely different initiative.

Below, the charitable groups make their individual pitches for support in North Dundas.

Congratulations to all the winners, a great job was done by all!

See more images and video footage of the crowd and winners being announced below.