CHESTERVILLE — Eighty years ago on this day (May 16), the Rotary Club of Chesterville received its Charter — a milestone anniversary the Club celebrated Saturday night with over 100 guests at the local Legion.

Club President Martin Derks highlighted how Rotary has become a deeply rooted organization in Chesterville, interwoven with the community and working in coordination with other organizations in the village. “Tonight is a good example. Scotiabank is a local business supporting us, Trinity United Church [Christ Church United] is providing the meal, the Legion is providing the bar … we have some students earning their volunteer hours in the kitchen,” observed Derks, a member of the club since the early 1980s.

“As a local fundraiser, it does just not get any better than this,” he added, before inviting the Club’s song leader, John Roosendaal, to lead the crowd in O Canada. 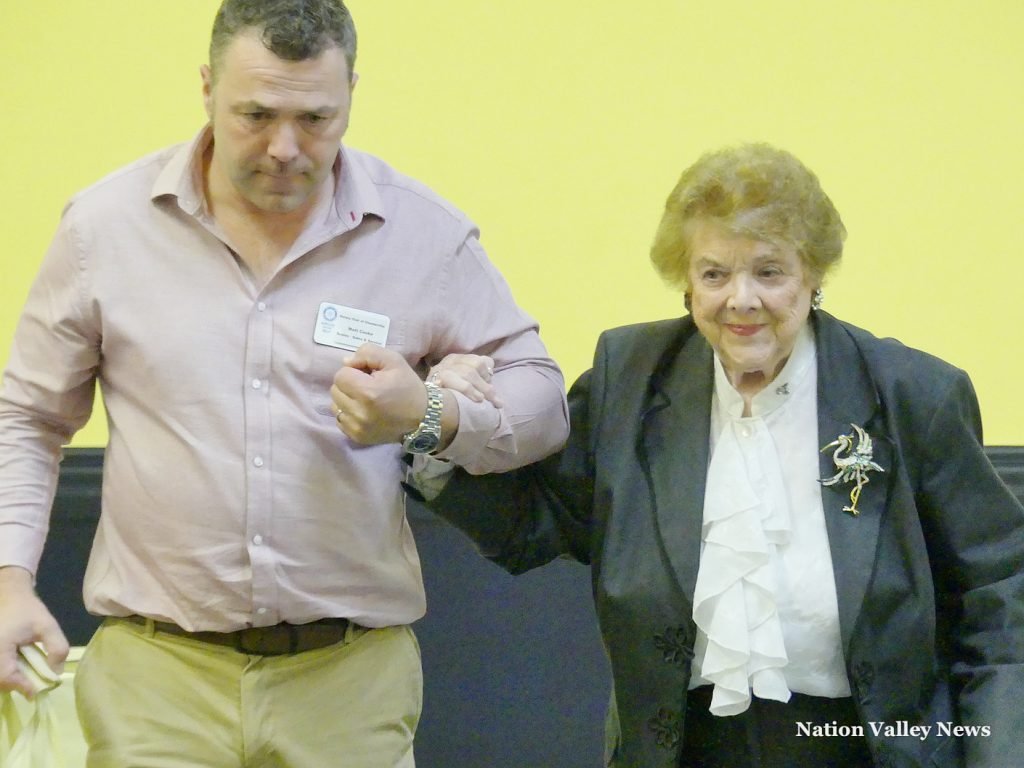 “It is great to see again ‘Service Above Self’ as the motto for all of us in our community, and how much support you have in this community, it’s really outstanding,” said visiting Rotary District 7040 Governor Sue Bellor of Massena, New York.

“They always tell me they’re a small club,” Bellor said of the Chesterville Rotarians. “But they do an awful lot and they just keep working, doing all kind of things that are very, very kind, very generous and very characteristic of Rotarians.”

“I’m really looking forward to visiting clubs like this that are what Rotary is really about, which is service above self,” said District Governor-Elect Martha Weaver of Malone, New York.

Longtime Chesterville Rotarian Stan Vanden Bosch chronicled the things done by the Club over the years. That included its backing of worldwide Rotary International initiatives promoting peace, fighting disease, providing clean water, sanitation and hygiene and supporting education. Key on that list is an ongoing effort to eradicate polio from the planet. Thirty years ago, “there were 358,000 cases of polio worldwide,” Vanden Bosch reported. “This year, we’re down to six cases in two countries,” Pakistan and Afghanistan,” he added to applause.

Vanden Bosch also highlighted several other health-promoting projects in the developing world —  in this case set up by neighbouring clubs but supported by Chesterville. Among them: A Montreal club’s maternal-care project in Malawi delivering medical supplies to that central African country; the Kemptville Club’s high-efficiency cookstove initiative that saves the eyes and lungs of rural villagers; the Cornwall Sunrise Club’s initiative to combat a horrible skin blistering condition — Buruli Ulcer — in Ghana; and the Eganville Club’s Nairobi, Kenya, ‘Imara’ healthcare clinic.

“This past Monday evening, our Rotary Club moved to donate another $2,000 to fund an incubator for this health project,” he noted, referring to the Eganville-led clinic.

And the annual Dutch Heritage Night in Chesterville allows the Club to donate $1,000 each year to the Ryan’s Well initiative.

Vanden Bosch went on to describe local benefits the Club has bestowed on the community. Those include the downtown clock and kiosk, river fountain, and the locally manufactured (by Industrial Stainless) gazebo pavilion, river fountain, as well as the streetlight snowflakes, maple leaves and “Merry Christmas” sign on the library building. “When the snowflakes come down, the maple leaves go up,” Vanden Bosh observed.

“These projects would not happen without the support of the community,” he said, mentioning the Legion, Lions Club, Township of North Dundas “and the many individuals and business who have made donations to the different projects.”

He further noted the Club’s annual Breakfast with Santa as another “highly successful” community event involving multiple partners at the Legion each December.

The Chesterville Rotary Club contributed $50,000 to Winchester District Memorial Hospital’s Renewing the Vision Campaign a decade ago, “and just this week, we paid for the installation of an automatic door opener for the family of a physically challenged individual” who was otherwise unable to leave home without assistance, he said, continuing the benevolent tally.

“It’s our hope that Rotary will make the world, our country, our community, a better place to live, work and play.”

The evening also saw the Club confer the Paul Harris Fellowship — a pin, medal and certificate — to three non-member individuals exemplifying the idea of ‘Service above Self.’ Individually introduced by Club Secretary Betty Vanden Bosch, Gordon Moat, Ron Leclair and Frank Heerkens were all honoured with the award named after the Chicago businessman who founded the first Rotary club in 1905.

An emotional Heerkens, owner of Dundas Power Lines, was so touched by the surprise recognition that he pledged to match the Club’s fundraising through the rest of this year, to a maximum of $8,000 — eliciting gasps of ‘wow’ from the crowd. 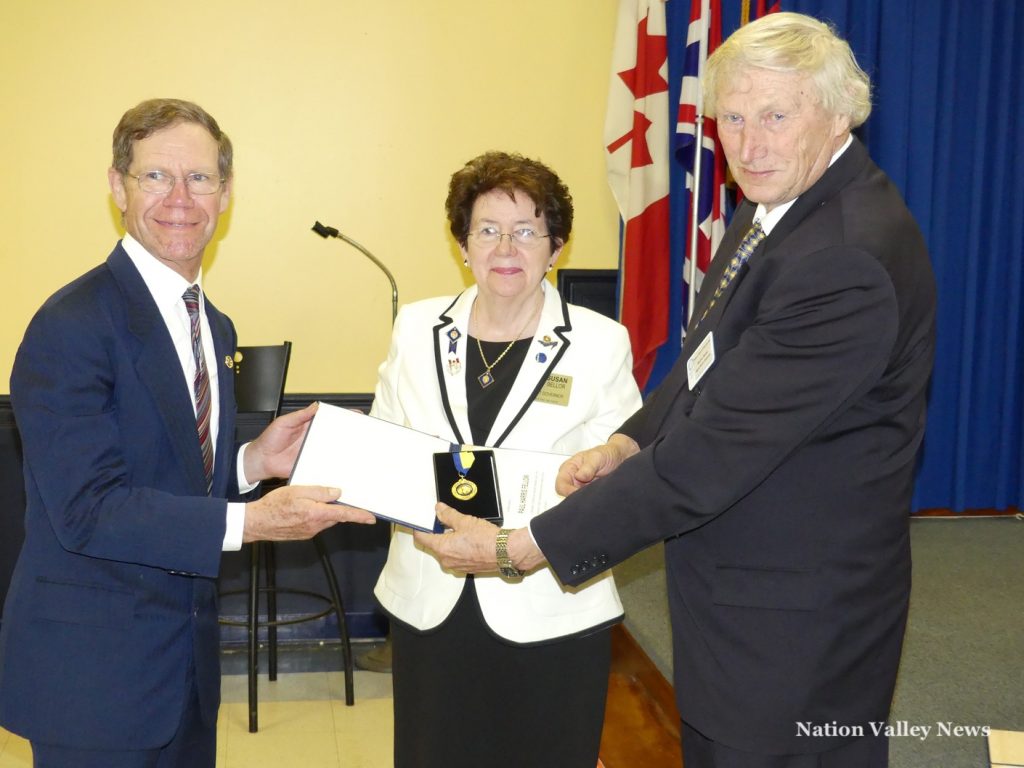 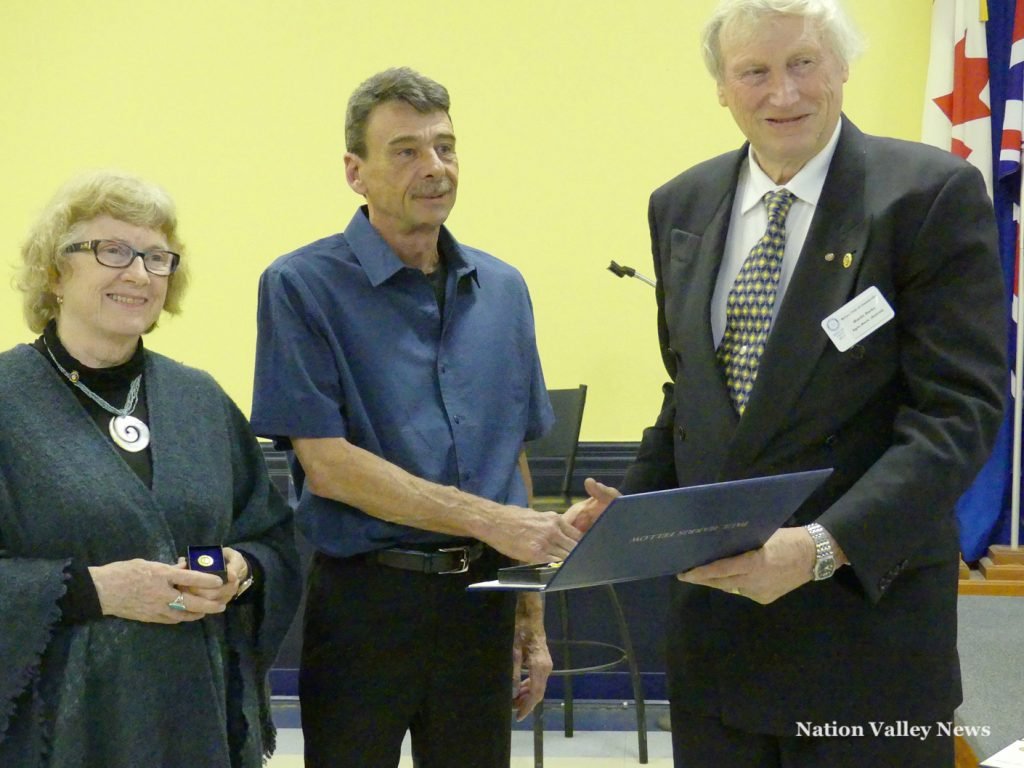 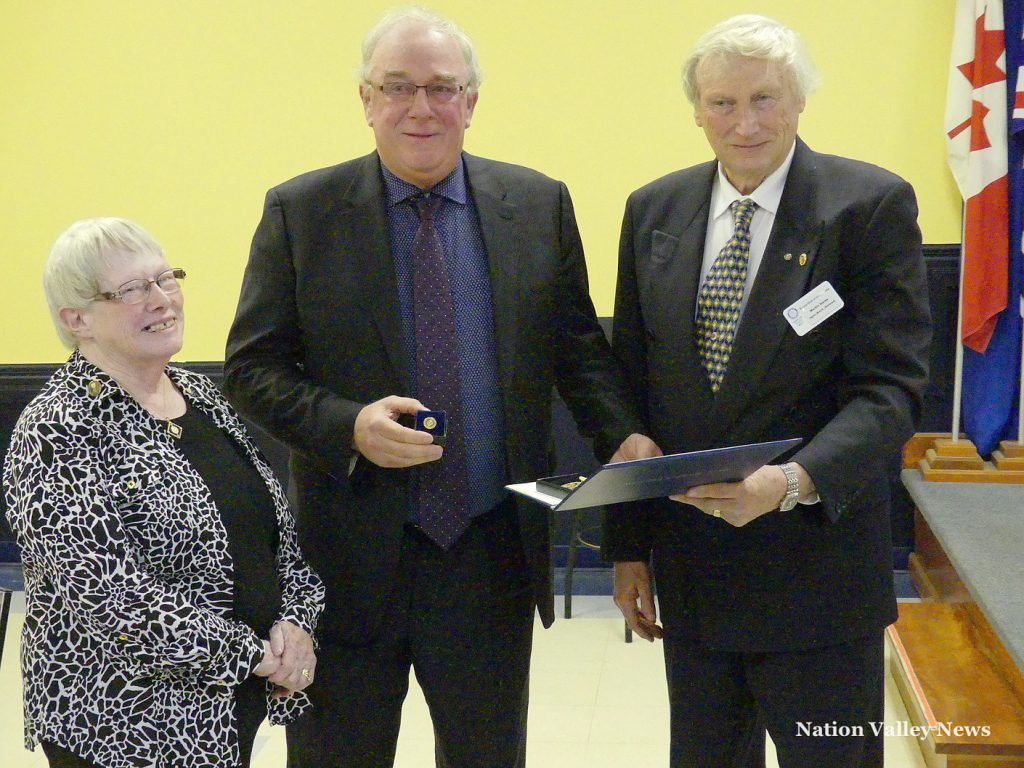 Each of the tables at the event featured a ceramic figurine centrepiece — each customized by Betty Vanden Bosch to symbolize a current Chesterville Rotarian and their individual vocation. The professional calling of Rotarians has always been an important subtext of the Rotary movement, part of Harris’s legacy an an entrepreneur.

Keynote speaker at the event was columnist, author and retired CBC host Mary Cook. The broadcaster held the audience’s rapt attention with her reminiscences of growing up poor in rural Renfrew County during the depression, intermingled with hilarious anecdotes and jokes.

Though she admitted to knowing little about the Rotary movement, Cook lauded Rotarians for caring about their community.

Below, an emotional Frank Heerkens was surprised to learn the Rotary Club of Chesterville & District would be honouring him as a Paul Harris Fellow at the Club’s 80th anniversary celebration. The grateful Dundas Power Line owner in turn surprised the audience by announcing that he would match up to $8,000 raised by the Club through the rest of this year, now that Scotiabank is curtailing the dollar-for-dollar program previously tapped by the local Rotarians and other service clubs.

Below, Ron Leclair is recognized as a Paul Harris Fellow at the Rotary Club of Chesterville & District‘s 80th anniversary celebration on Saturday, one of three local individuals so honoured for their service to the community that evening. None of the recipients was a Rotarian: The Club opted to go outside its membership to award the special pin, medallion and certificate to individulas in the community exemplying service above self. Betty Vanden Bosch introduces Leclair in the video footage.

Gordon Moat is recognized as a Paul Harris Fellow at the Rotary Club of Chesterville & District‘s 80th anniversary celebration on Saturday, one of three local individuals so honoured for their service to the community that evening. None of the recipients was a Rotarian: The Club opted to go outside its membership to award the special pin and certificate to individulas in the community exemplying service above self. The award is named after the founder of the Rotary organization. Betty Vanden Bosch introduces Moat in the video footage below.

Below, see Rotarian Beate Stewart’s gallery of images from the evening.