Dinos and Pitsa Pavlounis pose at the Louis' Restaurant counter, with a photo of the late Louis Pavlounis in the background. Zandbergen photo, Nation Valley News

Located at the corner of King and Water streets, Louis’ Restaurant has cooked up tons of delicious food and served multitudes of patrons since the Pavlounis family took over the eatery.

They naturally renamed the former Milano Restaurant after new proprietor Elias ‘Louis’ Pavlounis, a Greek immigrant who had arrived in Canada with just $20 in his pocket years earlier. He and wife Pitsa, also from Greece, and their two Canadian-born children took up residence in Chesterville six months after Louis’ opened — moving into an apartment above the establishment. The living quarters were nothing strange to the family: The Pavlounises came to Chesterville by way of Winchester, where they occupied a similar dwelling over the Country Kitchen Restaurant; Louis and his brother-in-law had owned that business together for several years after purchasing it from the Docksteader brothers.

“I remember the day the Chesterville deal closed,” says his son, Dinos, 48, during a recent interview at the establishment. Just eight years old at the time, he was already growing up in the family enterprise, as was his sister, Dina, two years older.

“They were helping every weekend,” recalls 69-year-old Pitsa, seated beside her son while reminiscing about events of yesteryear. (Locals may not know it, but Pitsa’s real name is Panagiota; she adopted her longtime moniker — pronounced ‘pizza’ — because it was easier for Canadians to pronounce.)

Louis initially settled in Carleton Place after his 1962 arrival. “He started from the bottom up, big time,” says Dinos of his late father, who passed away in April 2015. “He started off as a dishwasher because he didn’t know the language,” he says. “And as he was doing dishes, he was picking up the odd word here and there. And then from dishwasher, he got promoted to cook. Then he started doing his own recipes. And then he started doing everything, ended up buying the [Winchester] restaurant, and then, after that, he came here.”

He says his father was a savvy businessman who managed to purchase the entire brick building housing the Chesterville restaurant  — the structure includes four apartments and two other retail shop spaces — a few years before he set up his own eatery at the property, buying out the previous operator. “He did own the building first.”

Pitsa immigrated to Canada in 1968 and initially worked in a Montreal clothing factory. She wasn’t exposed to the restaurant industry until she married Louis and began waitressing. She graduated to the kitchen, “but I already knew how to cook for the house,” adds the grandmother of two. “I started that when I was 12, but nothing for a restaurant.” 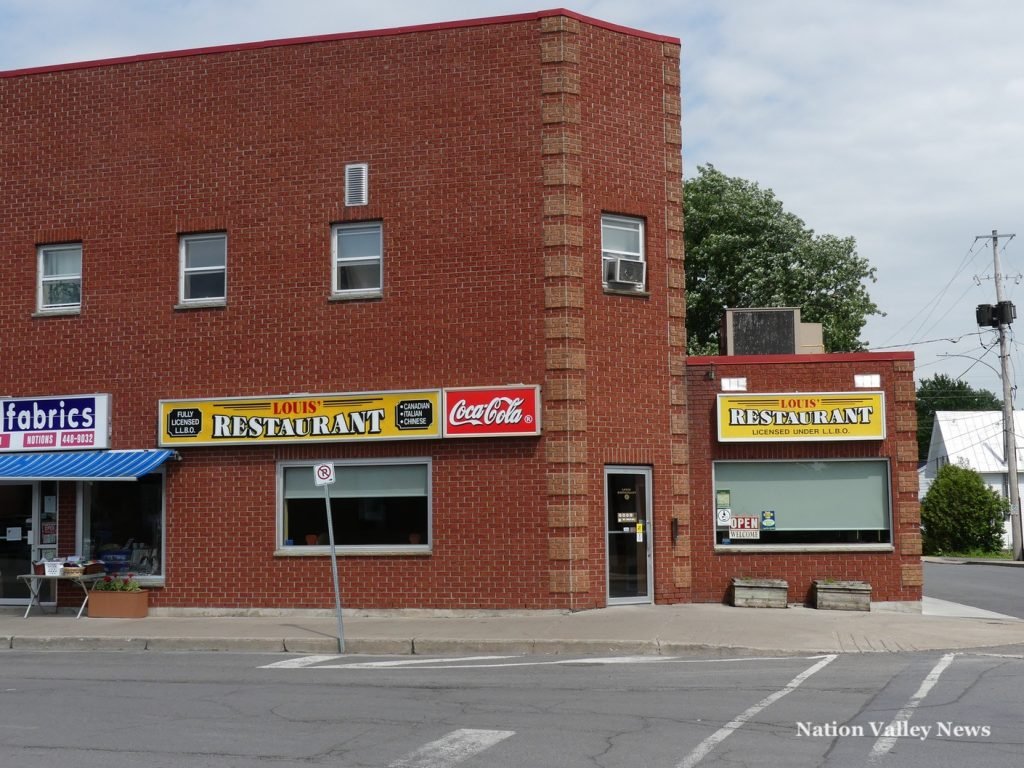 Louis opened with a few more Greek items on the menu at first, but quickly shifted focus to more common fare. “We did put it on the menu, but it wasn’t moving,” Dinos says, “but the Greek items do go over better now than they did a few years ago.”

That includes the souvlaki that sold “like hotcakes” at the Telus Ride for Dad wrap-up event in Winchester earlier this month, he says. (Support of charitable endeavours and good causes has been a hallmark of the operation for many years.)

“We just stuck with what everybody wanted,” explains Dinos. “You don’t create specialties in a small town. It’s very difficult. Small town specialty restaurants are few and far between.”

Originally, he says, they were open until 1 a.m. on Monday, but gradually curtailed the closing hour to 1 p.m. on Mondays. The last cutback came after the 2006 closure of the Chesterville Nestlé plant. The Swiss multi-national’s pullout truly “hurt,” the restaurateur observes. “We felt if for two years. A lot of local traffic, all of the technicians coming in and out of the plant … just disappeared.”

He strikes a more optimistic tone for Chesterville with CannabisCo’s plans to transform the site into a multi-million-dollar marijuana production facility. With a smile, he marvels that advance word of the development didn’t leak out at Louis’ Restaurant — otherwise being a crossroads for all sort of village information. “It was the only news we didn’t get.”

They’ve also enjoyed a liquor license from the very beginning, as the founder used his experience licensing his former establishment to do the same in Chesterville. “My dad was the first one to be licensed in Winchester,” Dinos points out, adding with a chuckle: “It was a lot harder to get in Winchester than it was here in Chesterville.”

No other business on King Street has occupied exactly the same address for as long as Louis’ Restaurant.

As an institution, the place has served as the go-to place for all sorts of meetings by community groups. Rotarians, Lions, Chamber of Commerce and Holstein Club members and others have all held their confabs over Louis’ special of the day. Serving those patrons through the years: a slew of local people employed by the eatery over the years, many of them as students.

The passing of time has also seen improvements both internal and external at the Louis Restaurant building. In two more recent examples, the owners re-bricked the entire structure in 1993 and extensively renovated the restaurant interior in 2002.

And while not an ethnic restaurant per se, Louis does retain a bit of a Greek vibe with Dinos and his mother still regularly using the language. Explaining his fluency, despite being born in Canada, Dinos jokes: “I had a very mean mother and father that forced me to miss my cartoons every Saturday morning and Wednesday nights to go to [Greek] school in Ottawa, for seven years.”

Tomorrow’s festivities (June 15) include free coffee and dessert until 11 a.m. (so you can have free coffee with your meal until that time); and 20 percent off eat-in and take-out orders starting 11 a.m. until closing.

Below: North Dundas Mayor Eric Duncan cuts the cake on the morning of the anniversary, posing with longtime former employee Debbie Chambers and proprietors Dinos and Pitsa Pavlounis (as seen right to left in the thumbnail image accompanying this video. The group also appears in the first few seconds of the footage.) Chambers worked for Louis’ from the day the establishment opened, up until three years ago.