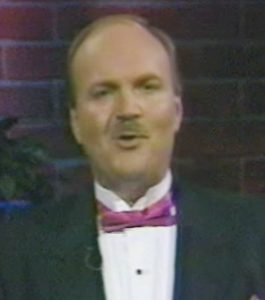 Weatherman J.J. Clarke has soldiered on in his longtime role almost every night in the two weeks since then.

The former CJOH Homegrown Cafe host had announced his impending return and acknowledged the support of the community in a video clip released the Friday before his reappearance in front of the meteorological screen.

“Some beautiful sentiment I’ve received over the last six months from you, our viewers, in the form of notes and just stopping me in the mall and emails. Thank you so much for your support,” said Clarke in the CTV Ottawa clip, his voice trailing off with emotion.

On his second day back, he posted a Facebook photo of himself (below) back in the studio, drawing more than 50 supportive comments and words of encouragement.

Below, Clarke as he appeared in 1994, during his CJOH side gig as host of Homegrown Café.