“If asked to describe Shirley in a few words, it would be this: Shirley is like the energizer bunny with the compassion of Mother Theresa, and the tenacity of a Margaret Thatcher,” said the recipient’s neighbour and fellow Chesterville resident, Roger Cole, while a surprised Coons raised her eyebrows with bemusement and a crowd of onlookers laughed with approval.

Like the breakfast shindig itself — since copied by other townships — the Community Builder Award was a Duncan initiative and “one of the things I’m proud of in my record,” the mayor told the audience of 300. “We have many people doing great things, and we want a way to celebrate those things.”

In lieu of a pension or “great big party,” joked Duncan, he asked and received council’s permission to have the 2018 recipient named early “as my final gesture as mayor.”

“This person has no idea,” he chuckled, referring to Coons.

Created in 2008, the award is presented to “an individual who has contributed greatly to improving the quality of lives in North Dundas,” Mayor-elect Tony Fraser reminded those in attendance.

Duncan cited the recipient for a slew of activities in the community and her “instrumental” status with a number of initiatives through the years.

The longtime Chesterville Green Action Gang volunteer — one of its founders in the wake of the 1998 Ice Storm — not only gardens for the group but serves as their bookkeeper. Coons also spearheaded the creation of Flynn Park. She drives patients to Cornwall for the Canadian Cancer Society. She’s involved with the Chesterville Kayak Club and St. Clare’s Anglican Church and has hosted international students as well as children from Chernobyl as part of a Chesterville Rotary Club effort. A lifetime membership on the Chesterville Fair Board and stalwart promoter of homecrafts, Coons is a previous Chesterville Winter Carnival Citizen of the Year. Her community involvements have spanned the decades, from helping with Chesterville’s Old Home Week and Centennial Year Celebrations in 1967, to the construction of a new Chesterville Legion in the late 1990s. Her pursuit of civic responsibilities has also seen Coons serve four terms on Chesterville Village Council, as well as the North Dundas Committee of Adjustment.

She also puts those homecraft skills to work with the Gathering Stitchers, a group that quilts and assembles goodie bags for meals on wheels recipients.

The last to speak while Coons looked on beside the podium, Roger Cole lauded his colleague and a “fine lady,” Shirley Coons.

Cole recalled first getting to know her when they were both elected to council in 1986 and how she quickly earned the trust and respect of Carl Ward, their otherwise “tough-ass reeve.”

“I think it was mostly because she was a good listener…. More times than not, her solution was the right one, and she solved many of our problems her way.”

Coons went on to become deputy reeve and one of the few women to serve on the old, 36-member United Counties Council of SD&G, Cole pointed out, also noting her “extensive dedication” to many committee and organizations in the community.

An original member of the parent-teachers’ association at Chesterville Public School, she also served badge secretary for the Chesterville Skating Club, added Cole, also quipping that she helped keep “our young hooligans in check” as a founding member of Chesterville’s former Neighbourhood watch. “I can tell you that not many messed with Shirley.”

Her volunteerism “should be a role model for us all to follow,” observed Cole. “She never did these deeds for a pat on the back or a photo-op,” he said, briefly growing emotional as he added, “but rather because she loved her community.”

“The way you’re describing me, I don’t think I know that person,” modestly joked the recipient in her turn at the microphone, after expressing her thanks.

Coons said it was “a privilege” to volunteer and that she was “thrilled and amazed” at the honour. 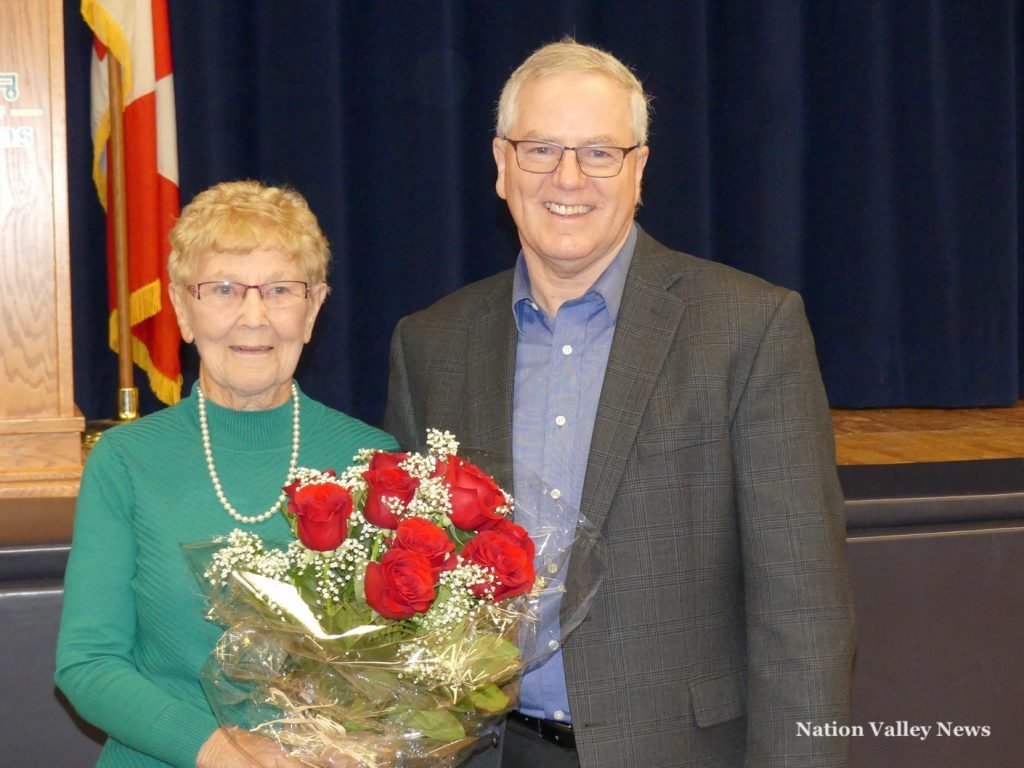 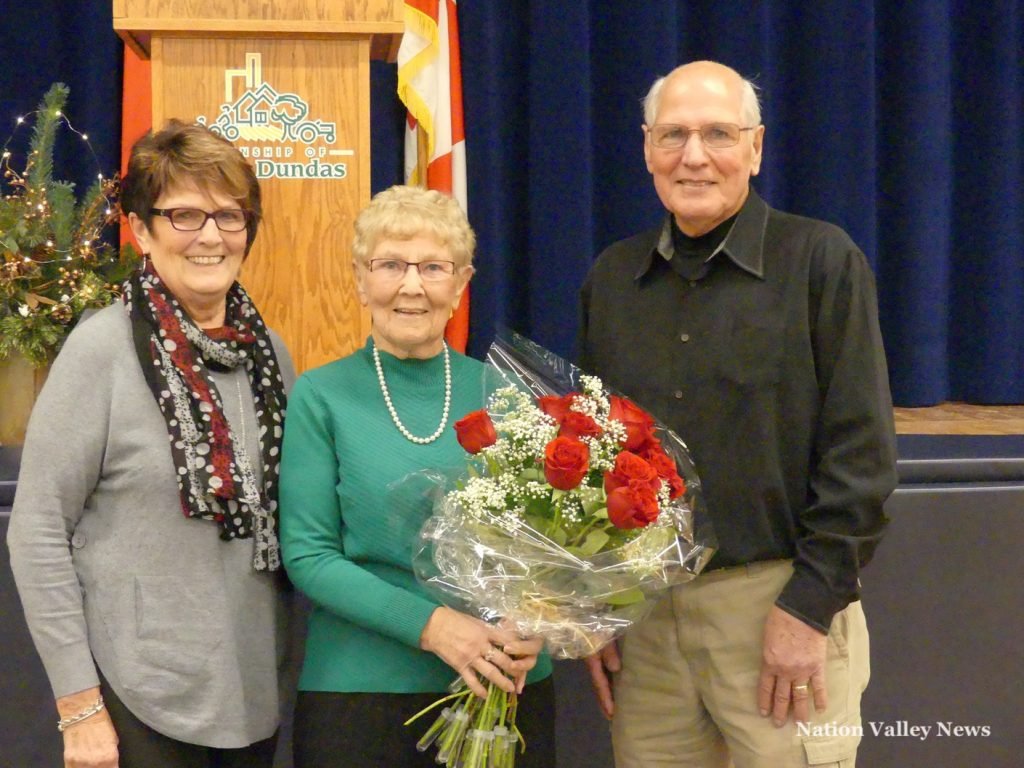