Making her first run for public office, Kelsey Catherine Schmitz drew applause from party faithful as she vowed to be “a fierce advocate, a focused and proactive listener and someone who is in it for you” if elected MP.  “You, my family, my friends, my neighbours, I am someone who is going to make you my priority.”

A teacher and professor with a PhD in Education, the 33-year-old Cornwall resident pointedly asserted that being an MP is “an act of service” and  “a role that’s not just about attending events or being seen in the community.” Rather, said Schmitz, the job is “one where I spend time with the people of this riding, hearing their concerns and ideas, advocating with them for a better community — not for them, with them.”

Below, the candidate addresses her audience at the launch, after being introduced by her two aunts.

“Instead of leaders that do not have experience outside the halls of political office,” she said, “we need elected members that understand how hard we work to afford our homes, medications and things like sports fees for our kids.”

The candidate has recently returned to the region where she grew up after a decade away. In her youth, she was part of a church community in Newington and attended local schools, including Horizon Jeunesse, Timothy Christian School and Rothwell-Osnabruck High School. During her university years, she worked as an historical interpreter at Upper Canada Village.

In an interview with NVN late last month at the Victoria Street Café in Chesterville, she recalled the “struggle to find local full-time work” in her field, necessitating her departure at the time. “A lot of my friends growing up have left the region as well. I think a bit part of that is sustainability of jobs and affordable housing in the region. I know that that’s been a conversation the last little while … I’ve lived it. I know what it means to try to have access to affordable, good housing and the kind of jobs that we need to afford those places to live.”

The Café continues to serve as one of the informal bases of operation for the Schmitz campaign, which has yet to set up an official central office. (Schmitz welcomes interested citizens to meet her every Wednesday of the federal campaign at the North Dundas establishment on 22 Victoria Street.)

“I felt it would be a really great way to reconnect and see what’s happening in the region,” she told NVN of her decision to run in the election, an opportunity “to meet all kinds of new people, as well as giving back to folks to people that kind of raised me.

“A lot of people here raised me to the adult I am now, and it’s a really great way to pay forward the knowledge and skills I’ve learned to be able to act on their behalf and have a voice.”

The candidate also conceded that she and her team hope to do at least as well as the NDP did in last year’s provincial election when the party finished second, pushing the Liberal candidate Heather Megill into third place on that occasion. Megill is back on behalf of the Liberals during this federal race.

“We would love to win, that’s definitely the goal,” said Schmitz team member Stephanie Lapointe at this week’s launch in Cornwall.

“I’ve seen firsthand across this country how often we let people fall through the holes in our supportive netting. I’ve seen what cuts to healthcare and education do to everyday people in Canada,” Schmitz also declared in her Sept. 18 launch address. “I see the impact that too much focus on corporate welfare has wreaked on our workers and families from the shores of Ungava Bay in the eastern Arctic to the rural roads of Stormont-Dundas-South Glengarry. I’ve seen this and wondered, how can we do better?”

Also deeply concerned about climate change, the candidate’s broad exposure to Canadian life follows a career that took her to Nunavik — in the far north of Quebec — where she ran a teacher education program for the Kativik School Board. She’s currently Expeditions to Communities at Students on Ice Foundation, focusing on youth-service projects and community advocacy in northern communities. The position saw her travel to Greenland for three weeks this summer.

She extolled the benefits of the NDP’s ‘New Deal’ environmental plan and the party’s overarching ‘In it for You’ platform that promises new social programs like national pharmacare and dental care. “Proactive, head-to-toe healthcare” would become the “norm” throughout Canada, under a Jagmeet Singh government, Schmitz confidently observed, adding with a smile, “This means not having to outrace your neighbour when a new physician is announced in your region and not worrying about paying your asthma medication each month.”

Rhetorically asking about the financial cost of such programs, she referred to Singh’s recent answer in which the NDP leader notes that “investments in people” are always scrutinized while subsidies for corporations and the fossil fuel industry go unquestioned. 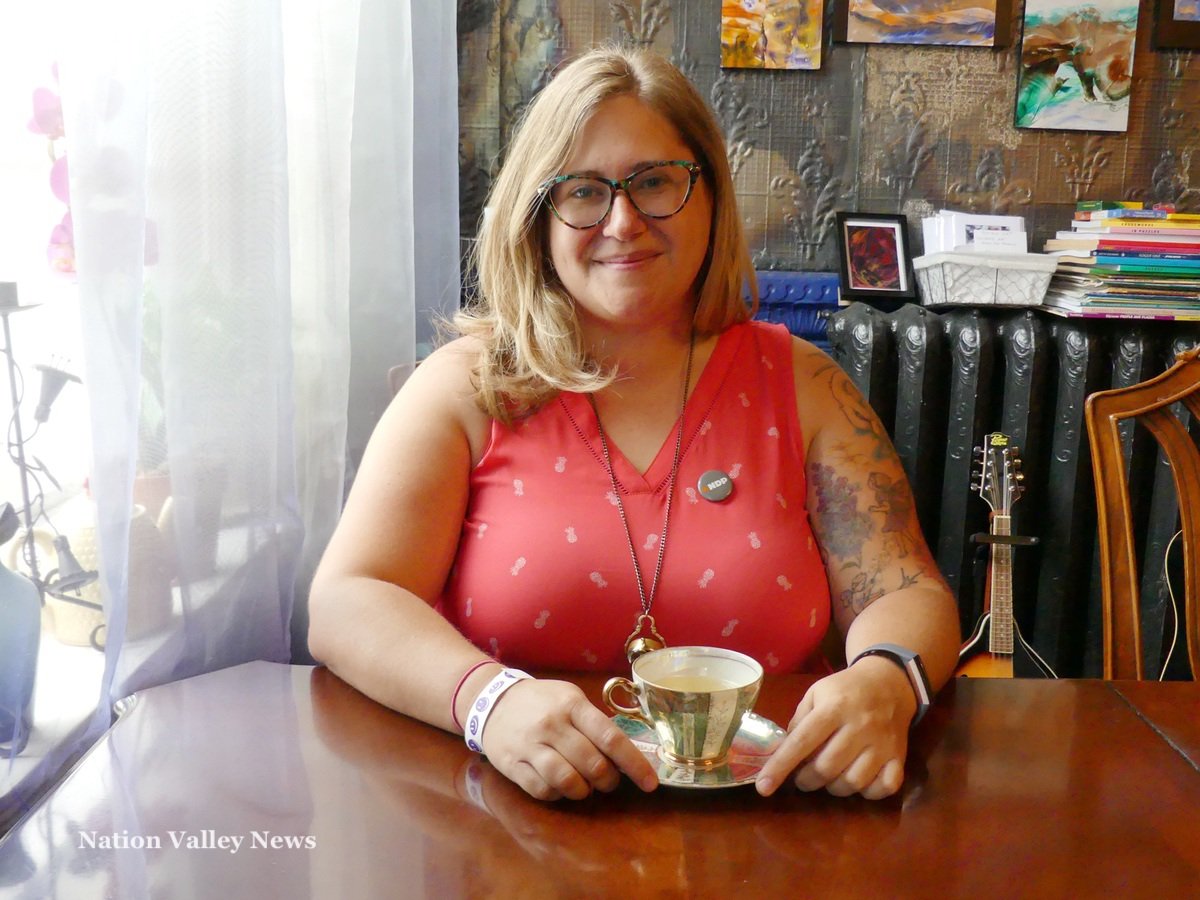