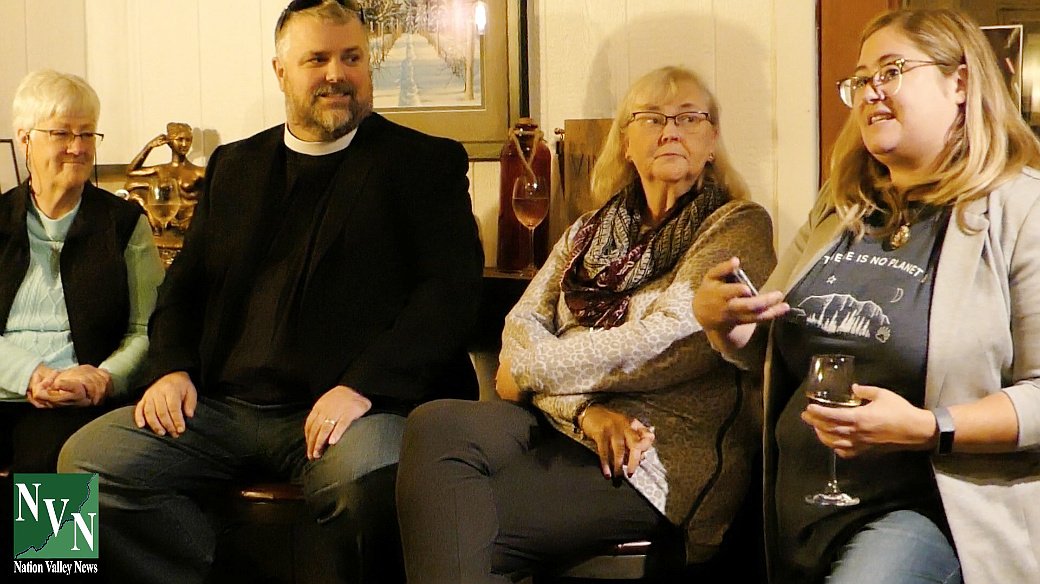 MORRISBURG — As a cold rain pelted the area last night, a small group discussed ways to better shelter and help the community’s most vulnerable during a roundtable session hosted by NDP candidate Kelsey Catherine Schmitz.

Schmitz’s specially invited panel of church representatives and clergy delved into the topic in front of a small audience gathered at Stone Crop Acres Winery and Vineyard.

The candidate said the event was intended to highlight local concerns she would work on if “hopefully” elected the next member of parliament in Stormont-Dundas-South Glengarry.”If that doesn’t happen,” Schmitz added, she would still strive to hold this riding’s MP “accountable” on the issues raised that evening. “I think it’s an important piece.”

Offering their views were Jane McMillan, a volunteer with a “Welcome Table” program at St. Andrew’s Presbyterian Church in Lancaster, and Rev. Jon Martin — Morrisburg’s Anglican priest — who was accompanied by his mother, Rev. Pat Martin.

McMillan said she became acquainted with a world “quite different” from her own middle-class Glengarry County upbringing when she worked as a teacher with the T.R. Leger School in Cornwall. “It was my introduction into the problems of poverty and alcoholism, drug addiction,” said McMillan, also highlighting how it brought her into contact with individuals who had suffered child and spousal abuse. “I arrived there when all of the plants were closing in Cornwall … I spent entire days with people who had been laid off, women who could no longer work at Levi’s….

“It changed my outlook on life and the needs in a community. I’m proud to say it made me who I am today,” added McMillan, who also counts Schmitz as a former student from her days teaching at Char-Lan District High School.

The Welcome Table at her church — where McMillan’s husband serves as minister — is simply “a warm place to come and have a good homemade lunch and conversation” without proselytizing, she said, serving between 50 and 70 people every week, free of charge, in a “festive” and friendly environment. McMillan conceded their rural environment in Glengarry means “you don’t find street people … the same way that you would if you were at the No Frills in Cornwall” but that poverty was still evident.

“We’re also trying to give a connection to people,” she said, identifying a problem with loneliness in segments of the rural population.

The Martins outlined the similar programs associated with their church’s “Apple Tree Ministries.”

“They were all based around things like access to healthy food … people who were lonely and didn’t have a place to go,” said Rev. Jon Martin, also highlighting services helping individuals connect with legal aid if they are stuck in an abusive relationship.

“We also do our Christmas Day lunch at the Morrisburg Legion,” he said, noting how that fundraiser event underpins other Anglican programs such as connecting job seekers to the Internet.

The church, he added, was also looking at starting a program that would create jobs in the hospitality industry while supporting affordable housing  — one of the top issues identified during the Roundtable.

McMillan also reported how on her church had assisted a family of Romanian migrants who had come to Canada legally but were ultimately deported. Her church expects to see more of that impact because of its proximity to Montreal, she said.

The event was just the latest in a busy campaign period for Schmitz, who won’t be letting up in this final weekend before the election. The candidate had just come off a lengthy ride-a-long with a member of the local OPP in Morrisburg, she said, in a bid to experience issues from the perspective of law enforcement.

Local political observers are keen to see Monday if the NDP at least manages to finish in second place and ahead of the Liberals in S-D-SG — repeating the party’s feat in the 2018 provincial election.

See a substantial portion of the discussion, below