NATION VALLEY — Electoral contests in 338 federal ridings across Canada are being decided today and local candidates are among those waiting on tenterhooks for the results later this evening.

Although many Canadians will have already exercised their franchise in this Federal Election by special or advance poll, the bulk of participating voters will cast their ballots today, Oct. 21. Polls open at 9:30 a.m., operating until 9:30 p.m. tonight.

Locally, tonight’s results will settle some key questions: Will Stormont-Dundas-South Glengarry Tory candidate Eric Duncan retain the riding for his party after the retirement of Guy Lauzon or will voters switch to another brand? Will the NDP’s Kelsey Catherine Schmitz place ahead of Liberal candidate Heather Megill (whose provincial candidacy last year saw her finish third behind the NDP contender in that contest)? Will the Conservatives make a comeback in Glengarry-Prescott-Russell or will incumbent Liberal Francis Drouin manage to defeat Pierre Lemieux a second time?

On the broader stage, will Justin Trudeau hang on to his role as prime minister, and if he does, will Andrew Scheer stick around as Conservative leader? Will Trudeau immediately exit the scene if Scheer’s party pulls off the win?

While Elections Canada encourages voters to bring their Voter Information Cards to the polling station — “to make the voting process easier” — it’s not actually necessary. See the ID requirements for voting.

Meanwhile, local candidates have been offering reflective “last words” of thanks on social media before voters execute their options at the ballot box. 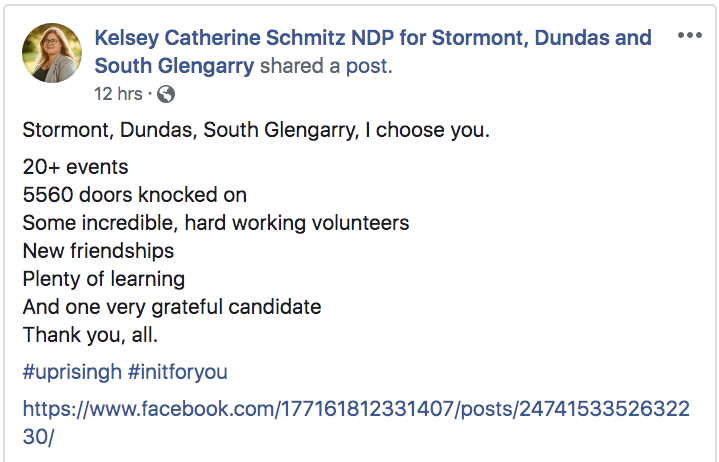