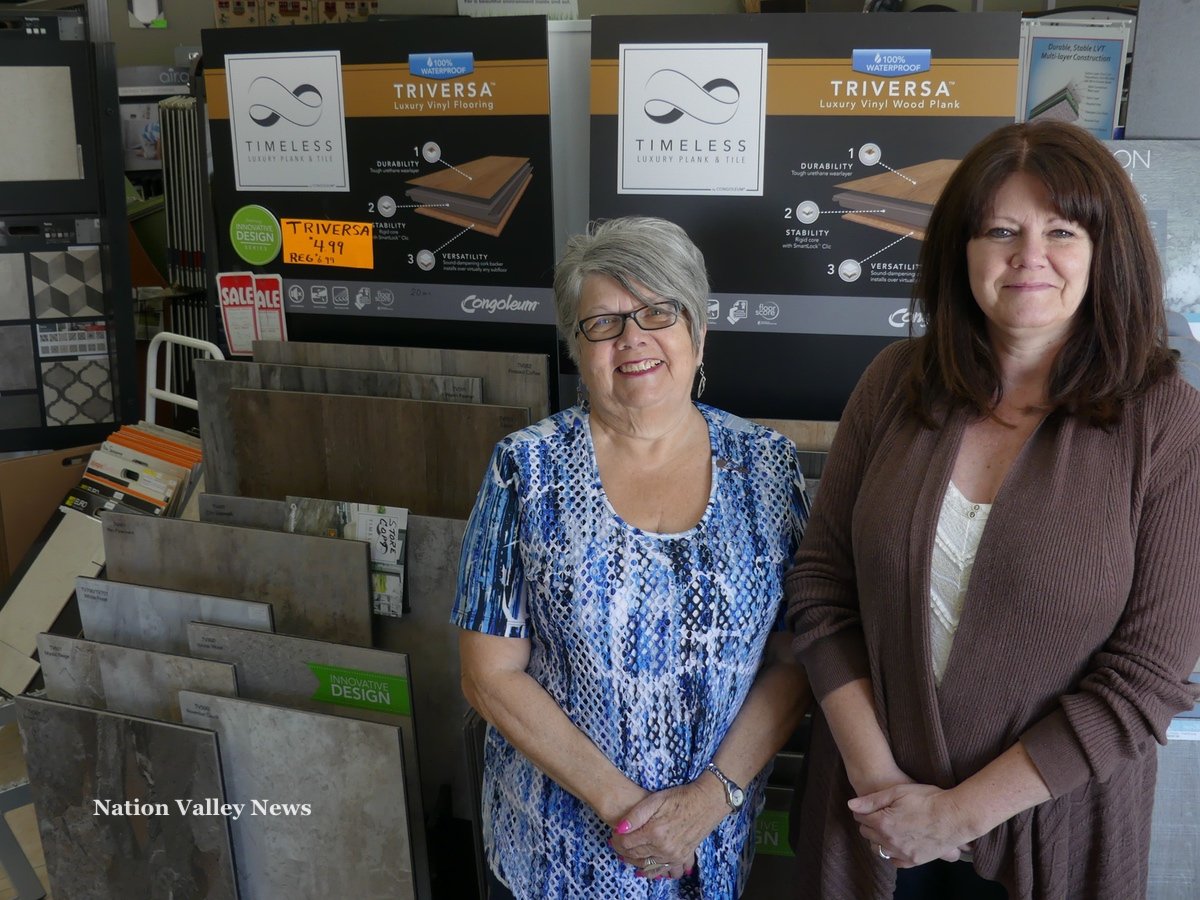 Just a year after acquiring the business, they made a big move across town to the store’s current address at 18 Industrial Drive, where the shop occupies 2,000 square feet.

Where Bernie Curran only sold carpet and cushion flooring at the store that still bears his surname, Cotnam today sells a much broader selection expected by the contemporary consumer.

“If they make it we sell it!” exclaims the long-time entrepreneur and avid community volunteer.

The best part about purchasing flooring from Curran’s is that there is no need to search for the right installer; her son, Andy, does it all.

“Whatever we sell, we install and service,” she says.

Her son attended Mohawk College for flooring installations but his expertise is not limited to just flooring. He installs ceramic tile on walls, too, and consequently does bathroom renovations after the drywall has gone up.

He’s set to take over the business once his mother retires later this year, and she says they’re currently finalizing the succession process.

“I’d like to retire because I have six grandchildren,” Cotnam explains. “The youngest is seven months and the oldest is 19. If I was retired I’d be able to spend more time with them, which is really important to me.”

The family business includes Cotnam Ace Hardware on King Street, which she bought in 2005 after the closure of the village’s Agri-West Co-op outlet at that location.

Cotnam says she became an entrepreneur when she re-entered the workforce after 10 years as a stay-at-home mother. It was 1984 and Bernie Curran hired her on the understanding that she and husband Andy Sr. would buy the business soon after, which they did. “I handled the office administration,” she recalls, adding she initially worked with Curran’s wife, Madeline, who showed her the ropes. “She was an awesome lady.”

The world was still changing, and Cotnam remembers how the occasional salesman wasn’t quite ready to deal with the female owner of a flooring shop. “There were a few male chauvinists out there. It wasn’t too bad, though,” she says.

She’s seen the rise of the big-box competition over the years. But she points out that her business draws shoppers even from Ottawa, once they realize her prices are usually cheaper once the cost of installation is factored in.

Being an entrepreneur “had its advantages, but it definitely has its disadvantages, too,” she says somewhat wistfully.

“If you’re going to be in business for yourself, you had better love what you do,” Cotnam advises, adding, “and I do.”

Below, Kaireen Cotnam was recognized Oct. 28 as a Paul Harris Fellow by her peers on the Rotary Club of Chesterville. With members of her family looking on, the Cotnam Ace Hardware and Curran Flooring proprietor receives the honour from Club Secretary Betty Vanden Bosch and President John Stewart. Paul Harris is the founder of the Rotary Club, starting the first group in Chicago in 1905.