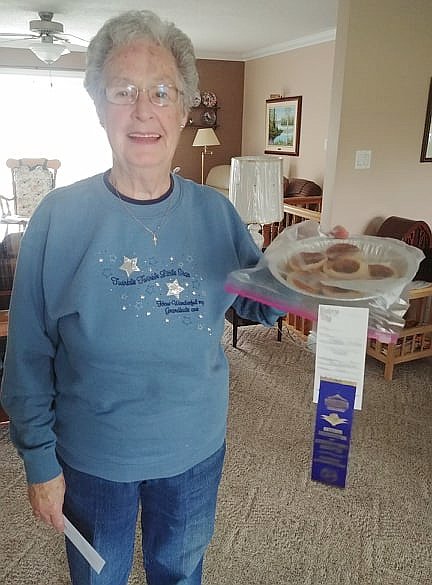 Above, Marion Finniss and her butter tarts, which placed second at the District 1 regional judging of the Ontario Association of Agricultural Societies.

CHESTERVILLE — Six of the Chesterville Fair’s best homecraft entries placed first in OAAS (Ontario Association of Agricultural Societies) competitions in August, allowing them to move up to District level judging that took place Sat., Nov. 2. In the end, the district judges awarded top honours to three of the Chesterville submissions, now destined for the OAAS provincial competition at the organization’s annual convention in Richmond Hill this February.

Local quilter Loretta Chambers with her third-place quilt, which won at Metcalfe Fair.

In the end, Johnson’s quilt was awarded the red ribbon and a ticket to the upcoming provincial competition. Hard work paid off for the younger set as well. The Smith sisters spent a lot of time working on their posters over the summer, according to their mother, Rhonda. Both girls were first-place finishers with their posters, and their work will similarly go on to represent Chesterville Fair and District 1 in Richmond.

Meanwhile, Finniss’s butter tarts took second place, while Chambers a;sp did the local fair proud with her quilting skills: While her Chesterville quilt did not place at district, Chambers did make the top-prize winning quilt at this year’s Metcalfe Fair, and that handiwork of hers came third at the AGM.

The Chesterville Agricultural Society expressed congratulations to all that took the time to participate in the local fair, and best of luck to those slated to compete this February.