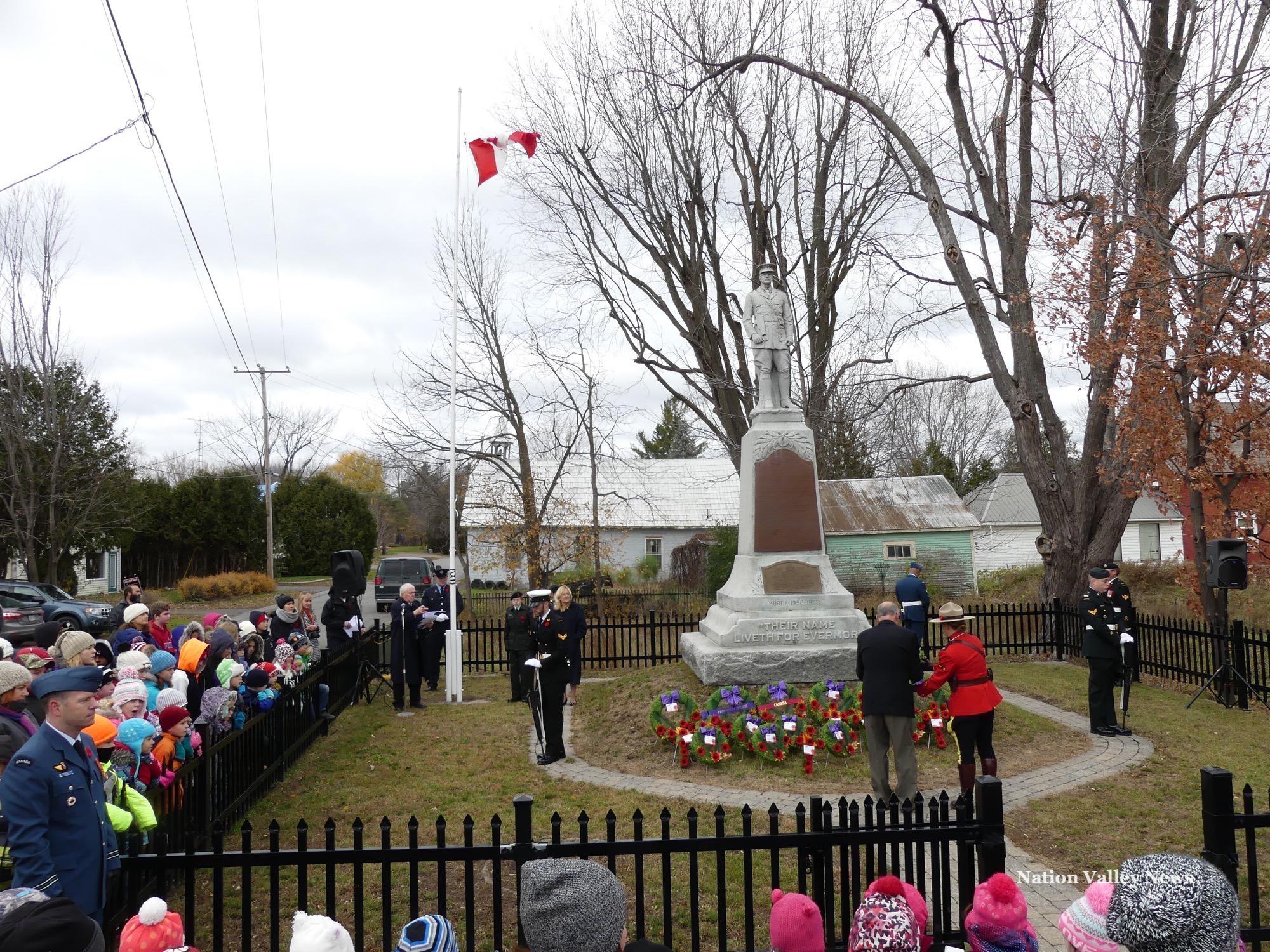 WINCHESTER — Caretakers of Morewood’s spectacular Cenotaph intend to have the soaring monument cleaned, repaired and adorned with etched-in-granite portraits of the community’s 20 fallen soldiers — among other improvements.

Estimated at $54,000-plus, organizers aim to have the work completed in time for the Cenotaph’s 100th anniversary celebrations on July 6, 2021. Although it’s expected that Veteran’s Affairs Canada will contribute up to $25,000 for the Morewood project — as happened recently for the former Matilda Township Cenotaph revamp in Dixons Corners — a local fundraising campaign is underway to cover the balance. Key committee members Bill Smirle and Reg Murphy have pitched both the Council of the United Counties of SDG and the monument’s home township council in North Dundas for respective donations of $7,000 and $6,000.

“We’re here to ask for dollars but also your support in a number of ways,” Smirle told North Dundas Council Nov. 12, suggesting the municipality act as “partner” by handling project funds, issuing tax receipts, covering annual electrical costs from planned floodlights, and co-signing the group’s application to the federal department. Smirle also asked council if the 2021 annual Meet Me on Main Street party event could be moved to Tuesday, July 6, to coincide with the nearby Cenotaph’s centennial commemorations that day.

The planned portraits of the fallen soldiers — 16 from World War I and four from World War II —  will be etched into small granite pillars to be mounted in the area of the Cenotaph. Currently, only the portrait of Capt. E.J. Glasgow appears at the site — in the form of a life-sized statue that has stood atop the Cenotaph since its unveiling by the community at the corner of Mill Street and County Rd. 7/13 on July 6, 1921.

Adding the portraits represents the “most ambitious” part of the project, said Murphy, who acknowledged it was inspired by a similar undertaking at the Vars Cenotaph. The existing bronze plaque listing 19 of the fallen will be cleaned, straightened out, and have added the more recently discovered missing name — Private Maurice Ogden Cheney — for the full complement of 20.

Years of grime will be pressure-washed off the monument by professionals and areas of crumbling masonry repointed.

A couple aspects of the project have not been costed. Those include adding a new electrical service to power the sound system during Remembrance Day ceremonies (instead of running extension cords from neighbouring houses) plus two LED spotlights — replacing lights removed from the site and left dark a number of years ago.

Smirle reported the Chesterville Legion has also been supportive, having recently volunteered additional poles and stands. A new permanent flagpole is also planned.

And it’s all to ensure the continued memory of those 20 Morewood men who gave their lives in service to their country. “The youngest was only 14 and the oldest was either 32 or 38,” he pointed out.

This past Remembrance Day was the 99th November 11th for the Morewood Cenotaph, which was originally funded by the community and the Glasgow family. Next year’s 100th gathering for Remembrance Day will lead up to the 100th anniversary of the monument itself the following summer.

Council members gave every assurance the municipality would help out.

Below, 2019 Remembrance Day ceremonies in Morewood.

Councillor Gary Annable said he had a great uncle listed on the Cenotaph, while Deputy Mayor Al Armstrong observed that “it would be nice to see the Morewood Cenotaph brought up to standard,” following improvements at both the Winchester and Chesterville cenotaphs. “We have to discuss it at budget time, but when you say that Morewood and the greater community will respond, there’s no doubt in my mind that it will.”

“I echo many of the sentiments expressed,” said Mayor Tony Fraser, also commending Morewood for its “well-organized Nov. 11th service,” where he had placed a wreath on behalf of the township.

The mayor said he had spoken to a trucker who happened to pass through Morewood on Remembrance Day and “couldn’t believe seeing so many people on that cold bitter day, standing outside, remembering, and he was quite impressed at the service and the response of the community to be there — which speaks to the need.”

The upcoming project will also see another push to prove the provenance of the Cenotaph statue, which may resemble the work of famous sculptor R. Tait McKenzie but is not currently recognized as one of his pieces. The statue of Glasgow is carved from granite — not the medium for which McKenzie was known.

“This has always been talked about, and while Eastern Ontario Monuments is up there, they will be looking for any kind of markings, whatever,” said Murphy of the contractor selected to clean the Cenotaph. While acknowledging that McKenzie’s signature material is bronze, the Morewood statue “might be a first” for the artist, he said.

Below, Remembrance Day 2017 at the Morewood Cenotaph.

Below, Remembrance Day 2016 at the Morewood Cenotaph.