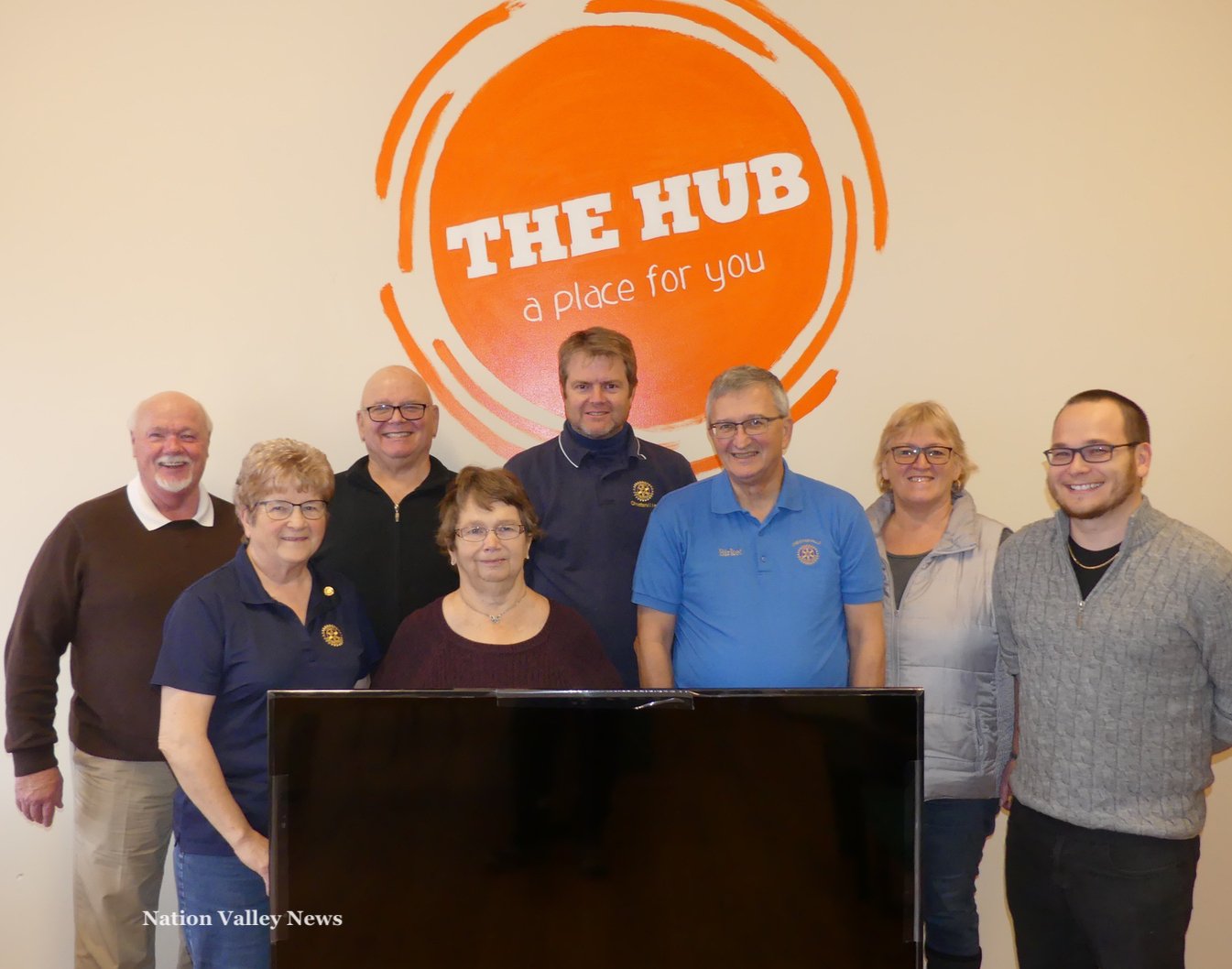 CHESTERVILLE — The new youth program at The Gathering House received its latest asset on Friday— a 55-inch flat-panel television provided courtesy of the Chesterville Rotary Club.

Members of the Club visited “The Hub” on Water Street last Friday to officially deliver the TV, which joins a number of games and attractions on the premises.

Debuting at the end of October, The Hub operates out of the west end of the former Fulton Block commercial building that the Christian congregation transformed into a church several years ago.

Numbers at The Hub were a little low to start “but now we’re drawing seven or eight people on a typical night,” says the church’s youth coordinator, Scott Hopkins, of the free program that runs 6:30 to 10 p.m. Friday evenings.

The Gathering House congregation was inspired to launch The Hub after the closure of the nearby Harmony drop-in centre — run as an outpost for many years by its namesake church in Harmony Corners. The death of the owner of that Main Street North address, from whom Harmony had rented, spelled the end of the Centre.

However, Hopkins explained that The Hub is not meant as a direct replacement for that earlier endeavour. For starters, The Hub “is not a drop-in centre,” he emphasized.

But it’s not meant to be exclusive, either, although The Hub does cater strictly to youth from grades 6 through 12 (with an enforced upper age limit of 18). Parents must fill out a consent form (paper or online) before their child may attend the The Hub.

And although the adult chaperones on scene are affiliated with The Gathering House, The Hub itself is touted as a “secular” program with no Bible study or need to be of faith.

“The goal of The Hub is simply to give students a safe and fun place to hang out on Friday nights,” says Hopkins, who foresees the program eventually hosting themed evenings such as paint nights, open mic, trivia, robot building, video game tournaments and the like.
As it is, the place already offers old-school video game systems, including PS2 and Nintendo Wii, with plans for vintage arcade game cabinets as well. Beyond the allure of early electronic diversions, The Hub also has a wide selection of board games, along with table-top games like foosball, air hockey and table tennis.
Hopkins also says it’s also the perfect spot for nestling in to do homework because of the free wifi. Snacks, soft drinks and coffee are available to purchase in the comfortable setting.
Meanwhile, members of the Rotary Club of Chesterville thought it sounded like the perfect local initiative to help out, purchasing the big screen TV a day after approving the expenditure. Many Club members have grown quite fond of The Gathering House’s other community offerings, including its popular coffee shop and public room used by quilters and other organizations. It was Chesterville resident and Gathering House member Lois Beckstead who informed Rotarians Beate Stewart and Betty Vanden Bosch about the need for another TV at The Hub. Club member Birket Foster ordered the unit online.
Scroll down to share this article. Scroll down to search nationvalleynews.com. Scroll down to comment.