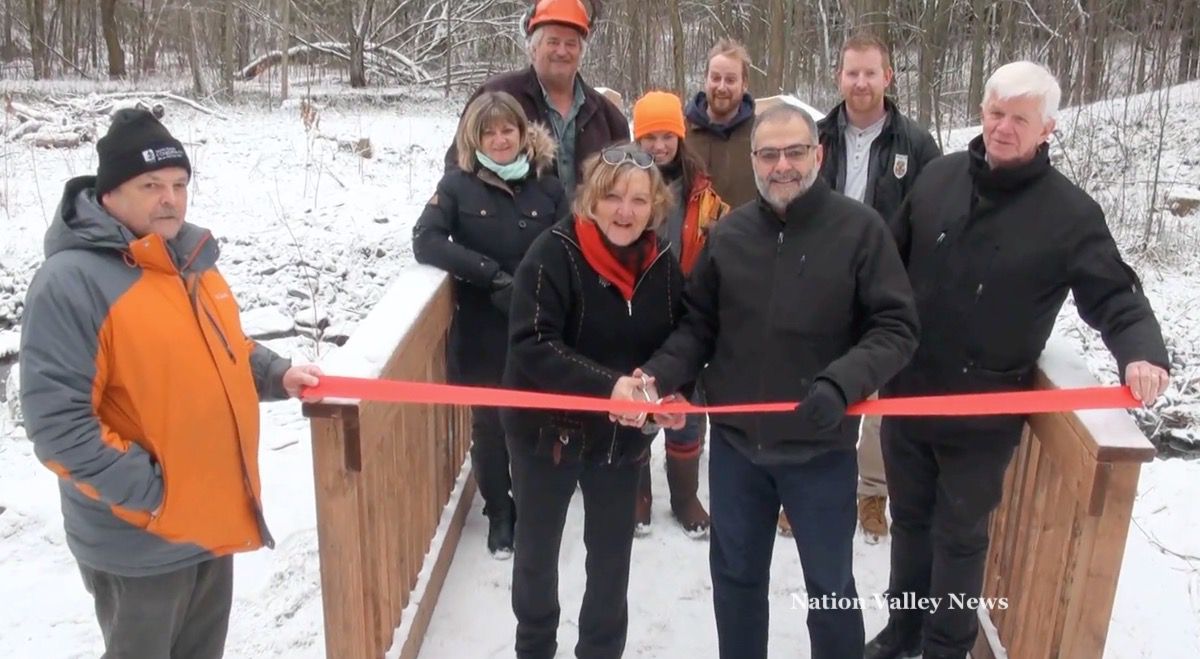 The project removed hundreds of dead and dying ash trees, infected with the Emerald Ash Borer; and helped restore a stream which had eroded into the parks trail system.

“The engineering solution that was proposed was to put in log deflectors, which deflect the flow to the opposite shoreline, creates an eddy where sediments can deposit and then the shoreline was armoured with aggregate,” explained Pat Piitz, standing near the new bridge that features a metal sub-structure and helical pile foundation. “Once that was done, the shoreline was backfilled, the topsoil put back in place, and it’s been planted with shrubs and live stakes,” added Piitz, SNC’s property team lead.
“The solution is to re-vegetate.”

A variety of large-caliper hardwood trees — “but not ash trees,” Piitz emphasized — will be planted this spring to replace those killed by the invasive insect species that has infected all of the ash trees at the Conservation Area. Black cherry, yellow birch and sugar maples are among the selected replacement trees.

SNC board member Doug Thompson said the organization is “very excited” about the stream restoration, noting that 100,000 people tour SNC recreational areas annually. “We’re very proud of the work our staff do as well. They do so much great work on our behalf.”

“We would like to thank Ontario Power Generation for helping to improve this public natural space in the community,” said John Mesman, SNC’s Communications Lead.

Thompson said that OPG’s partnership was “a perfect match” for the local watershed authority.

Through OPG’s Regional Biodiversity program, SNC has a strong history of partnering with OPG on environmental stewardship projects that help to increase local biodiversity and restore habitats for plants and animals across the Conservation Authority’s public natural spaces as well as local woodlands, grasslands and wetlands. A three-year project with OPG was also recently completed in Larose Forest.

“It’s a great program that we have,” said John Sanna, OPG Site Environmental Advisor, lauding the “great work” of SNC and adding his congratulations “on a job well done.”

Russell Township Councillor Cindy Saucier described the improvements as a “huge benefit to both the community and the local environment.”

J. Henry Tweed “had a wonderful vision of this park,” the councillor said of the original land owner who donated the parcel to the public.

Meanwhile, SNC says it is committed to working with its municipal partners to regularly maintain and improve its public Conservation Areas and trails to ensure accessible, year-round recreation for residents. “We look forward to continue working with our municipal and community partners to protect and enhance the local environment and provide outdoor recreational opportunities,” said Mesman.

Thompson, a former City of Ottawa councillor, also marvelled at the relatively low price of the new bridge in comparison to a similar unit installed by the city during his time at that urban council table.