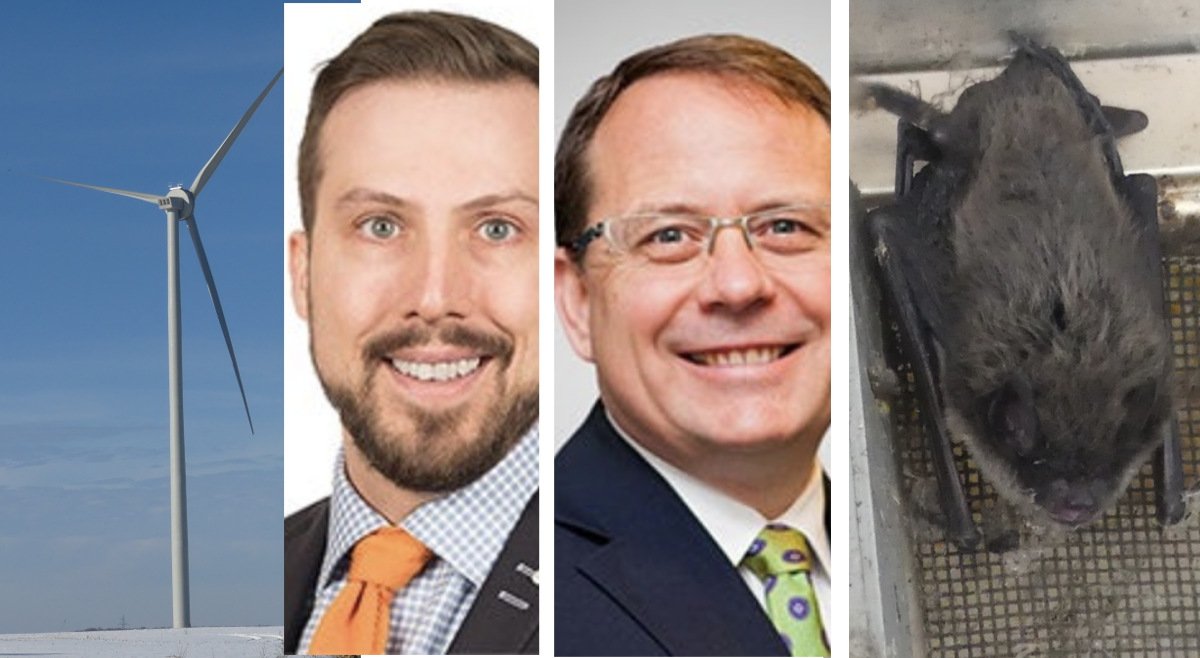 NORTH STORMONT — The Greens and NDP are going to bat for the halted Nation Rise wind project, rejecting the science cited by the Environment minister in his bombshell cancellation of the half-completed development in North Stormont.

The Green Party of Ontario — in a Dec. 19 press release — derides “supposed threats to the bat population” as the reason behind Environment, Conservation and Parks Minister Jeff Yurek’s decision revoking Nation Rise’s prior approval.

The New Democratic Party of Ontario — in a Dec. 20 release — similarly claims that concern for bats was merely a “flimsy excuse” and that the animals “aren’t impacted” by the project.

The province’s green light for the $400-million development — so called renewable energy approval (REA) — was granted to Nation Rise during the last few days of the Liberal Wynne government’s tenure in the spring of 2018. Local opponents with the Concerned Citizens of North Stormont had appealed that approval to the province’s Environmental tribunal, which ruled against them and upheld the project in January 2019. As their final avenue in the process, the opponents then appealed the quasi-judicial tribunal’s decision to the minister in February.

Meanwhile, developer EDP Renewables (EDPR) went ahead with the 29-turbine build while the appeal was still being mulled by Yurek. The Tory cabinet minister ultimately exercised his power Dec. 4 to quash the tribunal’s decision, and effectively the project itself, with construction about half done at that point.

In overturning the REA, he cited “irreversible harm” to endangered bats, which was “a questionable decision made under false pretences,” according to Ontario Green Party leader Mike Schreiner, who attributes the actual call to Yurek’s boss, Premier Doug Ford.

The premier “openly stated that he would tear down every wind turbine in the province if he could, and now he is fudging the science to make good on that pledge,” notes Schreiner, also insisting that Yurek’s rationale “is contradicted by the independent tribunal that found no evidence of significant risk to bat populations.”

“Ford’s actions could cost millions in cancellation fees and further damage the province’s reputation as a reliable place to invest and create clean economy jobs,” he asserts, decrying the governing Progressive Conservatives’ “distorting the truth, looking for any avenue to paint all wind projects with the same brush in their reckless and irrational crusade against clean energy.”

Ontario should protect wildlife from “real threats, not imagined” ones that “only serve the premier’s political agenda,” fumes Schreiner, MPP for Guelph and sole Green Party member in the Ontario Legislature.

NDP Environment critic Ian Arthur also rips the Ford government for a decision “not supported by the evidence,” noting the Tribunal “concluded there was no reason to block the project on the grounds of impact on bats.” The minister offered “no evidence” to back his position, says Arthur.

“Ford’s flimsy excuse for tearing the renewable energy infrastructure down is that the windmills impact the local bat population — which scientific studies and bat experts say is not true, and the government knows it,” adds the Kingston-area MPP.

The Green and NDP dismissal of the science employed by Yurek to kibosh Nation Rise is echoed by the developers themselves in the media. Tom LoTurco, director of development for EDP Renewables in Eastern Canada and the United States, accuses the minister of not using science and abusing the process in a recent National Observer report about EDPR’s North Stormont predicament. The Portugal-based company, which owns a 20 percent stake in Nation Rise after selling the balance to Quebec-based Axium Infrastructure, has applied for a judicial review in the hopes of overruling Yurek and re-starting the now-idled project.

The NDP is also drawing attention to local MPP Jim McDonell’s previous words on the subject: McDonell once maintained it would be too expensive to kill Nation Rise and likened the idea to the former McGuinty government’s controversial and costly gas-plant cancellation. But now “Ford is paying to tear down yet another wind farm,” according to the Official Opposition party, which predicts renewable energy cancellation costs will rise by hundreds of millions above the $231-million already spent terminating other projects.  The NDP also tallies 230 laid-off construction workers in North Stormont.