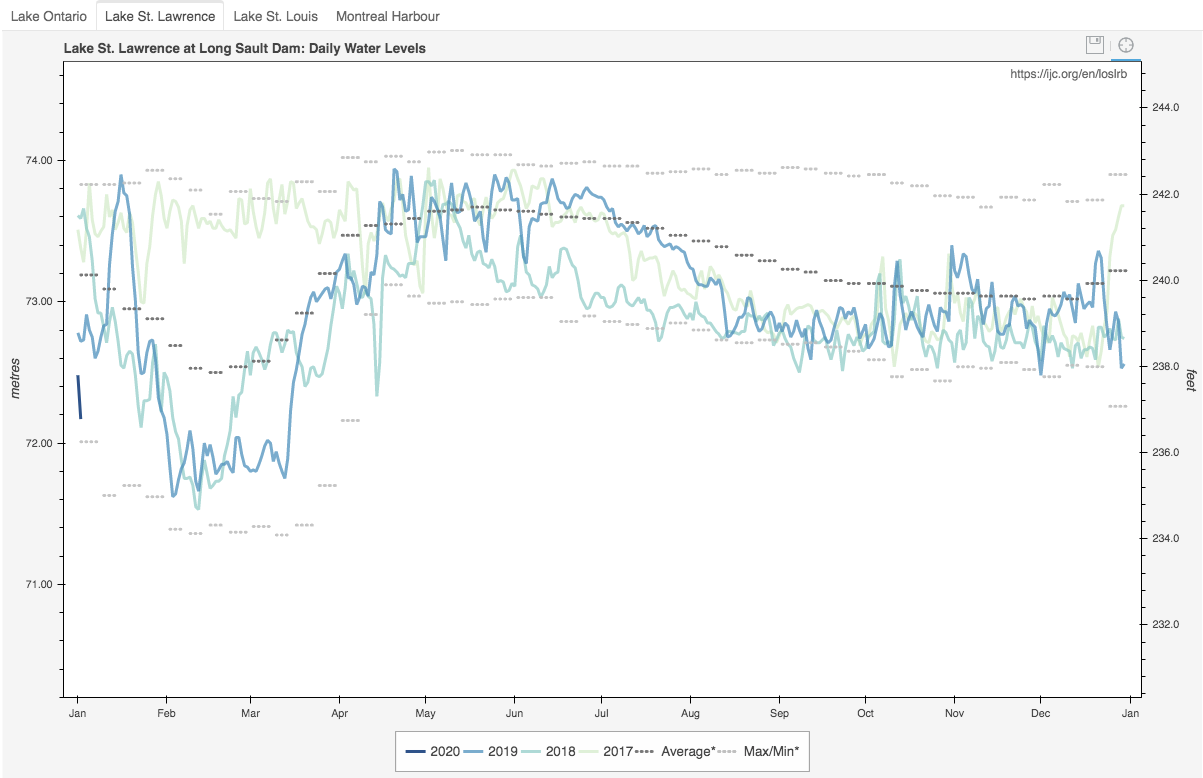 NATION VALLEY — Lake St. Lawrence has been exposing submerged secrets to a degree not seen in 43 years — the last time authorities allowed the body of water to drop this much at the conclusion of the shipping season to accommodate the drawdown of a high Lake Ontario.

With the proverbial taps opened at the east end of artificial Lake St. Lawrence — aka the post-Seaway St. Lawrence River between Iroquois and Cornwall — the flow rate through the Moses-Saunders Dam hit a new record in early January, confirms Rob Caldwell, Canadian Secretary of the International Lake Ontario – St. Lawrence River Board. “So it’s safe to say river currents are [at a record], too,” says Caldwell.

However, the record 10,610 cubic-metres-per-second flow registered at the Cornwall dam on Jan. 3, 2020, fell a little short of creating a corresponding record low on Lake St. Lawrence, with the surface sitting at 72.17 metres above sea level on that date. You would have to go back to the era of bell bottoms and Bee Gees to have seen lower water levels at this time of year: An interactive chart on the Board’s website shows Lake St. Lawrence at just 72.01 metres between Jan. 1-8, 1977. Caldwell says wind and ice conditions may have driven the river a bit lower in early 1977 to offset slightly slower flow-through at the dam.

The late 1970s are a long time ago now, and few locals remember seeing Lake St. Lawrence at the reduced levels reached in recent days. Social media was abuzz this weekend with photos of exposed sections of old Highway 2, the old Grand Trunk railway bed and greatly receded banks along the St. Lawrence River and its nearby tributaries. It’s not the first time this has happened.

“You can readily see, that, yes, levels have certainly been this low before – even at this time of the year,” Caldwell said by email, referring to the Board’s historical chart.

The absolute record low level occurred in the off season of 1978, when the river dipped to 71.35 metres during March 9-15 that year.

High water levels on Lake Ontario are drained off by upping the flow through the Cornwall dam. Increasing the flow drops Lake St. Lawrence by 15 times over the targeted reduction on Lake Ontario: Draining one inch of extra water off the great lake drops the level on the local water body by 15 inches, Caldwell confirmed.

Below, see how it is that when Lake Ontario is high, Lake St. Lawrence goes low as authorities drain off the excess. Lowering the great lake by one inch causes a 15-inch lowering in the level of Lake St. Lawrence.