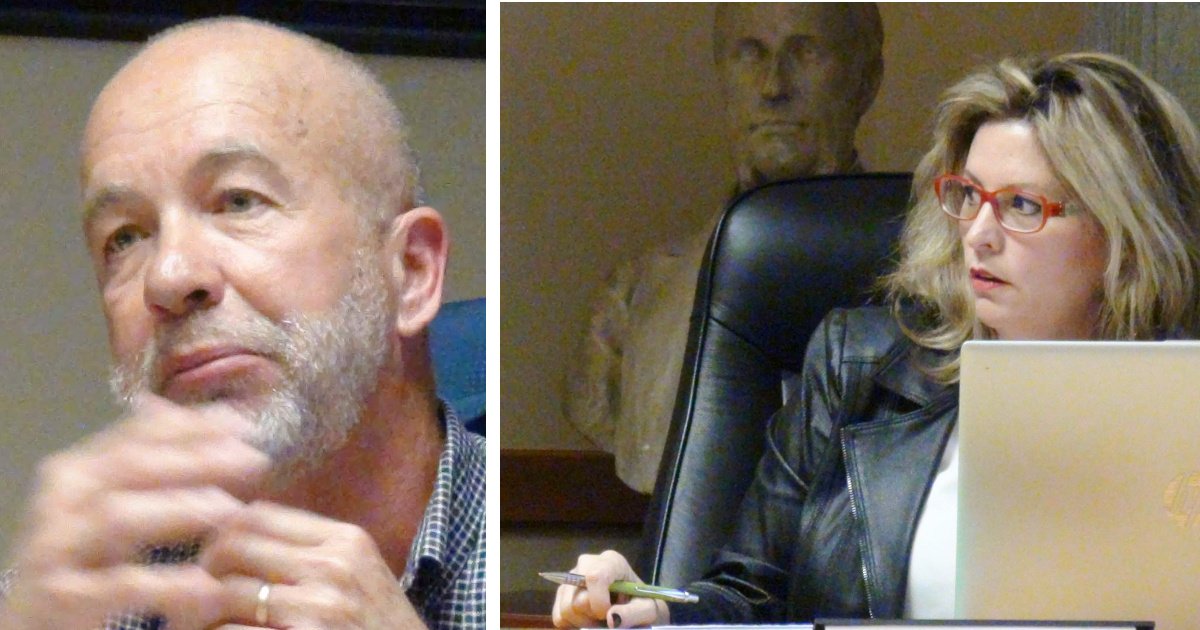 BERWICK — The recriminations continue at the North Stormont Council table over the township integrity commissioner’s recent findings against Roxane Villeneuve — with Steve Densham unloading last night on his fellow rookie councillor while vigorously defending the decision to have Tony Fleming formally investigate her behaviour.

Councillor Densham took aim at Councillor Villeneuve and what he deemed the “venom” of her “repeated attacks” — as the two sat awkwardly next to each other — during the portion of the regular council meeting reserved for members’ statements.

A clearly unhappy Densham was in part animated by an NVN Facebook poll asking readers if delivery of the integrity commissioner’s 32-page report against Villeuve made them more optimistic or less optimistic about the workings of council going forward. (Ninety-three poll respondents were split 52 to 48 percent on the question).

“I think a better question for the people of North Stormont to consider might be, how many breaches to the Code of Conduct do they expect staff and council to endure before invoking the integrity commissioner? One? Two? Five? Ten?” asked Densham, reading aloud from the prepared statement.

In his report, Fleming detailed “five breaches to sections of the Code,” said the councillor, noting this included “repeated offences occurring many, many times over ongoing intervals of time, showing a ‘disturbing pattern of harassment and intimidation.’ These are his [Fleming’s] words.

“We must not minimize or turn a blind eye to the venom in these repeated attacks.”

While pointedly noting council members are not responsible “to manage or police each other,” Densham said he and his colleagues nonetheless “offered feedback” to Villeneuve on her conduct — advice that didn’t “seem welcome in the least, quite the contrary, in fact.”

The Code of Conduct only “spells out the minimum expectation of behaviour in this regard,” the councillor also asserted, adding, “Sadly, Councillor Villeneuve chose to breach this code of conduct, not once, not twice, not five times, but many, many times over, ignoring feedback from staff and peers, until we were left no choice to engage the integrity commissioner, a highly trained and highly skilled individual with many years of experience in municipal law.”

Densham emphasized he saw “no other choice in order to bring a halt to these continued breaches that were damaging the health and morale of staff, wasting the valuable time we could use to advance the business of our municipality, and ultimately costing you as taxpayers money.”

“It would be incredibly naive to think that anyone at this council table or in this room knows municipal law or how to apply the Code of Conduct better than Mr. Fleming and his team,” he said, adding the bylaw under which Fleming operates was endorsed “unanimously by every person at this council table.”

Don’t blame the complainants for the reported $30,000 cost of the investigation, Densham argued, saying it amounted to “blaming the victim for defending themselves and those they have a duty to protect.”

He expounded, “Diversity of opinion is the lifeblood of municipalities. Having differing opinions at the council table means we are more thoroughly looking at problems and challenges facing our municipality, exhausting all avenues of investigation, to find the best overall solutions.

“But diversity requires respect and integrity in order to thrive, and we must trust the wisdom of the majority to keep us moving forward. This is democracy in action.

“So I ask my question one last time: How many ethical breaches of our Code of Conduct should staff, council and the people of North Stormont endure? How much damage should we allow to continue before we take action — action as clearly prescribed in our bylaws.

“As for the question of whether this investigation will result in a more positive path forward for North Stormont, Councillor Villeneuve’s many breaches of the code, then agreeing to disagree with Mr. Fleming, a seasoned integrity professional, and now new and continued dishonouring of his recommendations offers little confidence to the people of North Stormont.

“But we push forward nonetheless, with moral resolve, and hopeful optimism, refocusing our attention on the positive business of making North Stormont a ‘Good Place to Grow.’”

The complaints against Villeneuve were brought to the integrity commissioner by Densham, Deputy Mayor Frank Landry and Councillor Randy Douglas last summer. A Kingston-based lawyer, Fleming delivered his report to council on Jan. 14. He was not present at last night’s meeting, Jan. 28.

In his own statement, Councillor Douglas urged Mayor Jim Wert to exercise more control and authority at council meetings. Douglas complained of noise and interjections from members of the audience during meetings and asked the mayor to ensure the traditional “questions from the public” segment be limited to matters discussed at the meeting. North Stormont Council is one of the few local councils that sets time aside each meeting to entertain questions from the public.

North Stormont Council meetings were only sparsely attended in the recent past but have become a hot ticket as the local politicians found themselves immersed in such matters as the Nation Rise wind project saga and obvious tensions between Villeneuve and her colleagues.