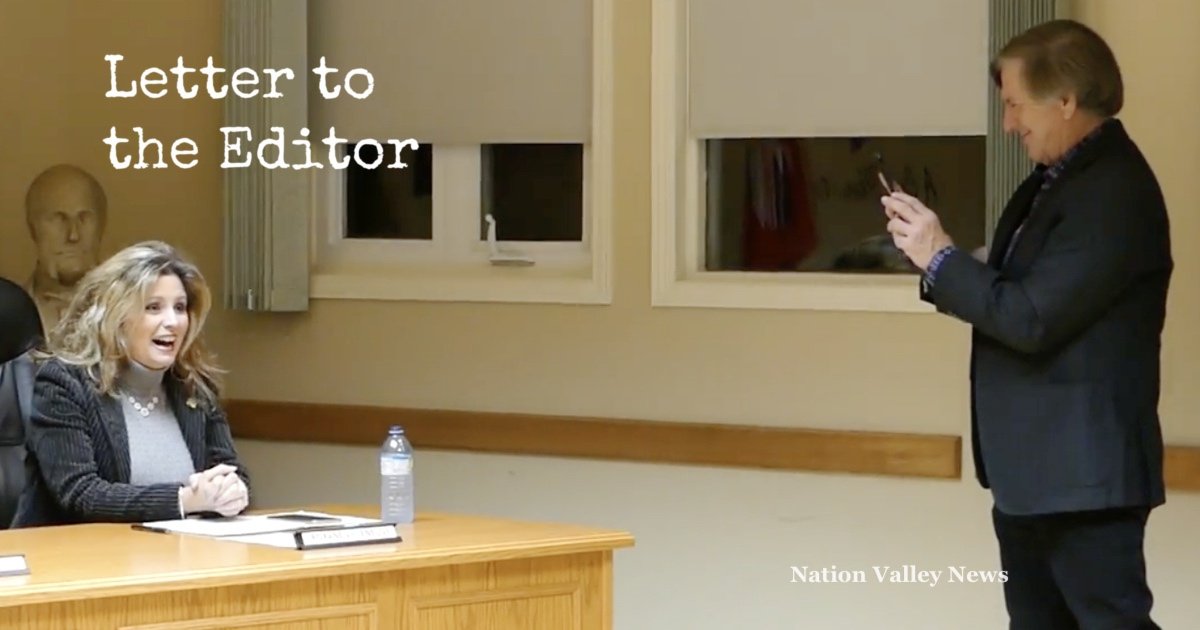 Above, letter writer Garfield Dunlop takes a photo of his partner, North Stormont Councillor Roxane Villeneuve during the December 2018 evening of her swearing-in.

My name is Garfield Dunlop, and I am the partner of Councillor Roxane Villeneuve. I have 35 years of political experience as a councillor, reeve, deputy mayor, warden and five terms as an MPP. I never lost an election or nomination.

I worked closely with Roxane and watched her win by hundreds of votes over her competition. In fact Roxane had 1,352 votes and Densham came in a close second at 889 votes and the mayor, who has never run an election, was once again acclaimed.

The resentment and jealousy towards Roxane started on election night because clearly she is a threat to any political position in SDSG. And believe me she is being encouraged to run in 2022 as either the mayor or MPP, and If she decides which position, I will be with her all the way to victory.

So my concerns with Densham’s vicious attack on her is that he has deliberately left out some key points.

For example: On the evening they were sworn in December of 2018 everyone was patting themselves on the back saying what great financial shape they were in. We found out later their deficit was $50,000. Hardly a reason to brag.

Densham didn’t mention that although the 2019 draft budget was prepared by the CFO in December of 2018, the council didn’t see the budget itself until late February 2019 and rammed it through six days later without any public input whatsoever. That’s when I told Roxane that she was in for a tough time because this is nothing but an “Old Boys Club” and the last thing they want is a very bright and accountable female on council.  They will continue to withhold financial information.

Densham fails to mention that the township is currently on its fourth CAO in 18 months nor does he mention that the CFO was fired without cause because, as the mayor said, “The council is taking a new strategic direction”. However, that foolish move has cost the taxpayers tens of thousands of dollars in severance pay and was done without any council motion or meeting.

I noticed that Densham did not mention that the three complaints made to the Integrity Commissioner by Densham, Landry and Douglas were made in July and August when Roxane was working tirelessly as the Chair of the Tastefest Committee that raised over $30,000 for the municipally owned pool at Moose Creek.
Guess what? Those three actually showed up hoping to get some political points. Pathetic!

Densham also didn’t mention that on the evening of January 14 when Good Old Tony Fleming, the Integrity Commissioner, showed up to give his report on the frivolous complaints, that both Mayor Wert’s wife and Densham’s wife heckled me in the council chamber when I told Roxane that her father would be very, very proud of her for being strong and accountable to the taxpayers. The mayor sat back and didn’t stop his spouse.

It’s amazing that Densham didn’t mention that although the IC complaints cost over $30,000, never once did they ask her for an apology of any kind. Instead they used taxpayer dollars to try to muzzle her. That was just part of the hundreds of thousands of dollars spent on legal matters this past year.

I could go on and on, but the reality is that Densham used his pathetic statement to try to divert attention from the fact that four men on the council made a huge error in trying to muzzle likely the brightest and accountable politician in Eastern Ontario. It didn’t work as people from across the province have been contacting her with words of support and encouragement.

If Densham and his boys think they will muzzle her, good luck. It won’t happen. She will continue to look for accountability and transparency and will continue to work hard for the people of North Stormont.