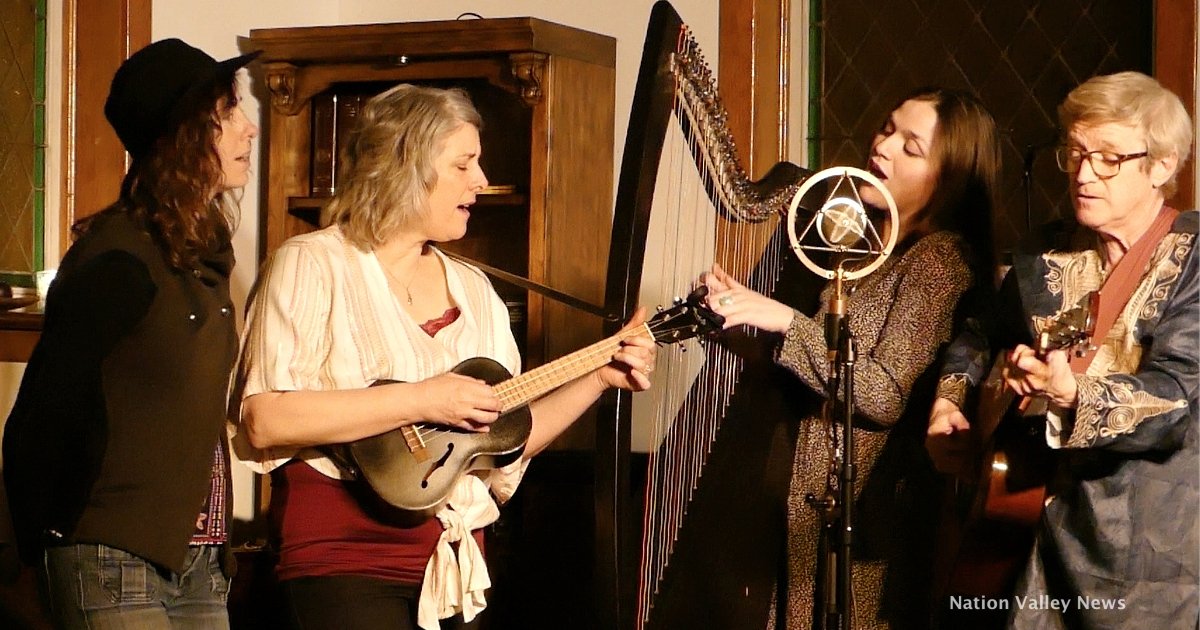 Above, Montreal harpist and vocalist Marie Hamilton (second from right) is joined on stage by Ha’Loonie members Harmony Koiter (left), Rachelle Eves and Tony Glen, during the final number at the Saturday night (March 7) concert inside the former Morewood United Church — now operating as a fitness retreat known as New Origin.

A column by Amanda and Patrick Burger

Tony Glen set the tone for the audience of 60-plus people at the one-time United Church by noting in his opening remarks that music was returning to a place where the voices of generations had rung out in praise of the divine. To emphasize the importance of clearing the space for an evening of beautiful music, his Ha’Loonie bandmate Harmony Koiter symbolically threw a bag of garbage out of the doors of the former church to the delight the audience sitting in comfortable and classy chairs in the elegant wooden interior.

Lit by warm, golden light, the local trio then launched into their folk-style repertoire, which was accentuated by a heartfelt rendition of Pink Floyd’s Wish You Were Here. The angelic voices of Rachelle Eves and Koiter complemented Glen’s guitar picking. The group, perfectly timed and in perfect harmony, was playful as well, leaning on each other for Bill Withers’ classic Someone to Lean On. The audience sang along, and the song was crowned with a beautiful harmonic conclusion.

Ha’Loonie then presented three original tunes, one from each member. Eve’s original song about the grid going quiet dramatically highlighted the difference between our hectic, internet-ruled lives with the peacefulness of getting off the grid. Koiter’s original featured stormy change-ups and a punkish attitude, but it was laced with humour. Glen introduced his original, Under Cover Lover with a nod to James Bond, and the song wove Cold War imagery deftly into its relationship metaphor.

The band then switched gears by singing the theme songs to a couple of British TV shows. Evoking the theme of hope, the chorus of the first song brought home that emotional connection with their audience that the Ha’Loonies are able to achieve: “Water sustains me without even trying / The water can’t drown me, I’m done with my dying”. The beautiful precision of their voices was given added soul by Koiter’s harmonica playing. The next tune, Gentleman Jack, had the audience clapping along.

They concluded with a Crosby, Stills, Nash and Young song, Teach Your Children, and the audience’s singing lent the song additional warm fullness and evoked that hippie sincerity of 1969.

See the complete Ha’Loonie set, below.

After the excited buzz of conversation during the intermission, Glen introduced Marie Hamilton. She began with sacred harp singing from the South, getting the audience to hold a note while she played with passion and sang words whose devotional character were fitting for the space that was once a house of worship, as the warm glow of the candles on the sills of the stained-glass windows accented.

She introduced her next song by noting how she had studied with harp masters in Ireland, Scotland and Brittany. Her harp playing was beautiful, and there were surprising bass notes and a full palette of sound underlaid by the thrumming depth of the harp.

An original song about her father’s passing and a cover of an obscure underground band — which she introduced as a ‘weird’ song — followed. The song about her father featured one hand playing an ethereal rhythm, while the other plucked expressive notes as Hamilton’s beautiful, breathy voice evoked the sorrow of her loss. Any reservations about the stream-of-consciousness and simple music of the ‘weird’ song that followed were banished by its powerful sentiments, which, as the lyrics themselves stated, was “about the feeling of opening your own heart”.

Hamilton then had a song for Leonard Cohen fans, and prefaced it with her memories of being at Cohen’s door the night he died. Her evocation of Cohen’s Chelsea Hotel #2 featured her singing Cohen’s ironic but beautiful words and contrasting them with lilting notes from her harp. Her playing elevated the song, but lost none of its earthiness, and Cohen would certainly have approved.

After playing one Scottish and two Irish reels, and capturing their raw rhythm while giving them ethereal overtones, she moved on to her favourite song to play on the harp, a Tom Waits tune. Her playing on this one was deeper and more resonant than what had come before. She really pulled on the strings in a mad, discordant crescendo before the music dwindled to a beautiful finish. Her final song exhibited all her musical strengths, as she reached back to the early 1800s for a tune called Row On where the united voices of the audience expressed its message of hope. The evening concluded with Ha’Loonie and Hamilton on stage together for a lovely rendition of the Scottish classic, Wild Mountain Thyme. The audience, after being exposed to so much beauty, went home with full hearts and heads full of the beauty of music resounding in a beautiful space.

Below, Hamilton’s final number, Row On, followed by a joint performance of Wild Mountain Thyme with Ha’Loonie.