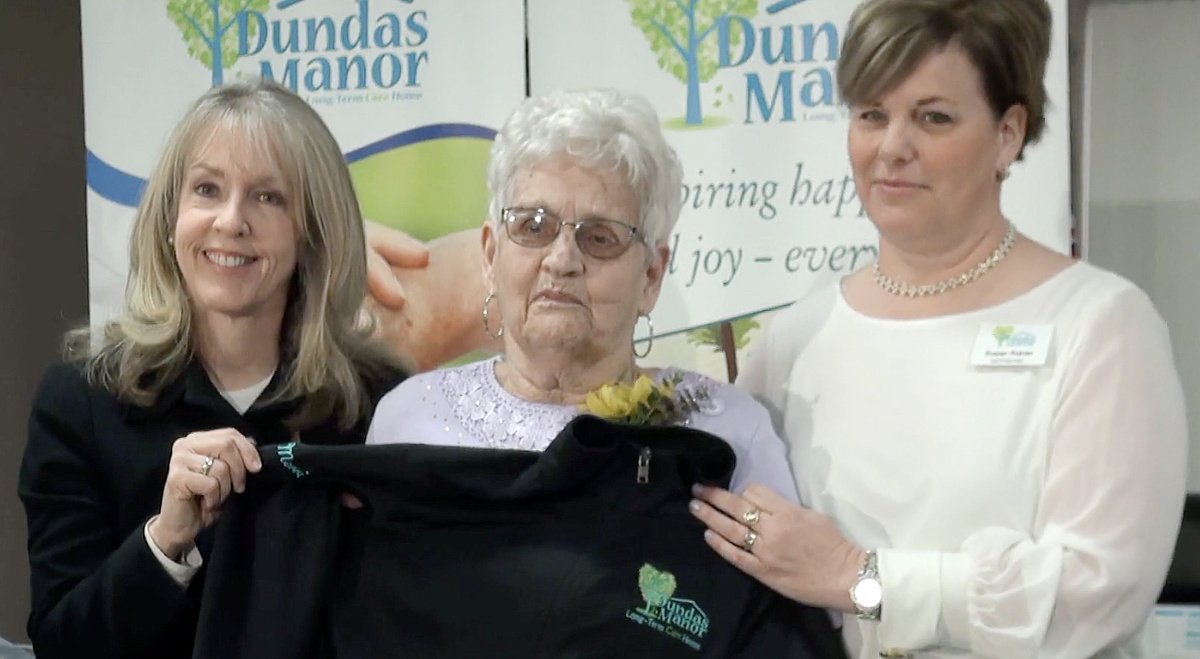 WINCHESTER — Dundas Manor’s long-awaited overhaul and expansion is a ‘go.’

Shovels are expected to break ground on the estimated $32-million project sometime next year on what will be an entirely new — and much larger — Manor following the funding commitment announced by Ontario’s Minister of Long-Term Care, Dr. Merrilee Fullerton, in Winchester this morning.

Though Fullerton didn’t announce a dollar figure, Dundas Manor CEO Cholly Boland later clarified that the local community will have to raise one third of the capital cost — about $11-million — with the province covering the balance. (The “quiet phase” of a local fundraising campaign is already underway, and the municipal governments of North Dundas and SDG have respectively allocated $500,000 and $4-million toward the project; other municipalities have been asked to contribute as well.)

“We are very much looking forward to working with the community and the Dundas Manor team to raise the funds needed to make this long-awaited dream a reality,” said Kristen Casselman, Managing Director of the WDMH Foundation.

“We all have a family member, a loved one or friend who has needed long-term care, and many of us will one day need it ourselves. We will all be touched by it in some way,” said Minister Fullerton, a medical doctor, at the podium. “Our government is working hard to build long-term care beds faster and more efficiently so our province’s most vulnerable can receive the care they need.”

To be located south of the current Manor building, the new institution will have 128 beds, up 30 from the current complement of 98. Preliminary designs are complete. Residents can look forward to a better quality of life with more accessible space, wider halls and larger windows.

Over 40 years old, the existing, cramped Manor meets only the “Class C” standard of Ontario nursing homes with outdated four-bed units. That’s set to drop to two residents per room in the new home, allowing for greater individualized and resident-directed care. The current situation and lack of privacy “at times affects our dignity,” said Joan Dunlop, a resident of the Manor since October 2018.

“We lack any personal space and the bathrooms are way too small. I speak on behalf of the residents of Dundas Manor who love this home, and the people who live and work here,” said Dunlop. “We have made the very best of an outdated physical structure, but we’re very happy about today’s announcement.”

The announcement is in line with the Ford government’s commitment to create 15,000 long-term care beds — “new and modern spaces” for nursing-home residents — across the province in five years. It cites the development as part of a campaign promise to end “hallway healthcare.”

“Creating new long-term care beds and redeveloping older beds in North and South Dundas is key to ensuring more seniors get the support and high-quality care they need close to home,” said local MPP Jim McDonell, who has been under considerable local pressure to deliver the Manor project ever since his party was elected to government in 2018.

“On behalf of the residents who call Dundas Manor home — and the staff, physicians, and volunteers who care for them —  thank you to the Ministry for this long-awaited announcement,” said Boland. “I also want to thank Rural Healthcare Innovations (RHI) Board Chair Bill Smirle and the entire Dundas Manor Board for their tireless efforts in planning and advocating for this much-needed new home.” (Rural Healthcare Innovations is the non-profit corporation that owns the Manor.)

Boland also offered special thanks to local MP Eric Duncan, highlighting Duncan’s work in moving the file forward since his days as councillor and mayor, and as executive assistant to his immediate federal predecessor.

“Bring on the bulldozers!” declared Smirle. “This has been a long process and there is still much more to do. But today, we celebrate.”

The impending project comes after years of advocacy and lobbying. Dundas Manor administrator Susan Poirier grew emotional, her voice breaking while remembering residents who had been pulling for a rebuild of their home but never lived to see the approval. “Today we especially think of Earl, Norma, Daisy, Gord, Laura, Ron and Wes — just to name a few special folks,” she said, accompanied at the podium by Dunlop. The duo then presented a Dundas Manor jacket to the minister as a show of appreciation.

In another special gesture, Boland concluded the proceedings by unpacking a guitar and leading the group in a song — It’s fun to stay at the D-M-L-H, to the tune of the Village People’s YMCA. The visiting minister — MPP for Kanata-Carleton — returned to the front of the room to join him in the performance.

“It is such a proud day for Winchester and the surrounding area. We look forward to the next visit by the minister in a hard hat when we break ground!” exclaimed Dunlop.

The third time proved a charm for the event, which was postponed twice in recent weeks. Organizers initially hoped to host the announcement at the Manor itself but a seasonal virus outbreak (not COVID-19) closed the place, only to have bad weather intervene on the second try. The gathering ultimately happened at the North Dundas Council Chambers, away from the Manor entirely because of the COVID-19 pandemic.

See the full proceedings below. The video thumbnail shows Minister Fullerton joining Dundas Manor CEO Cholly Boland in song near the end of the session.