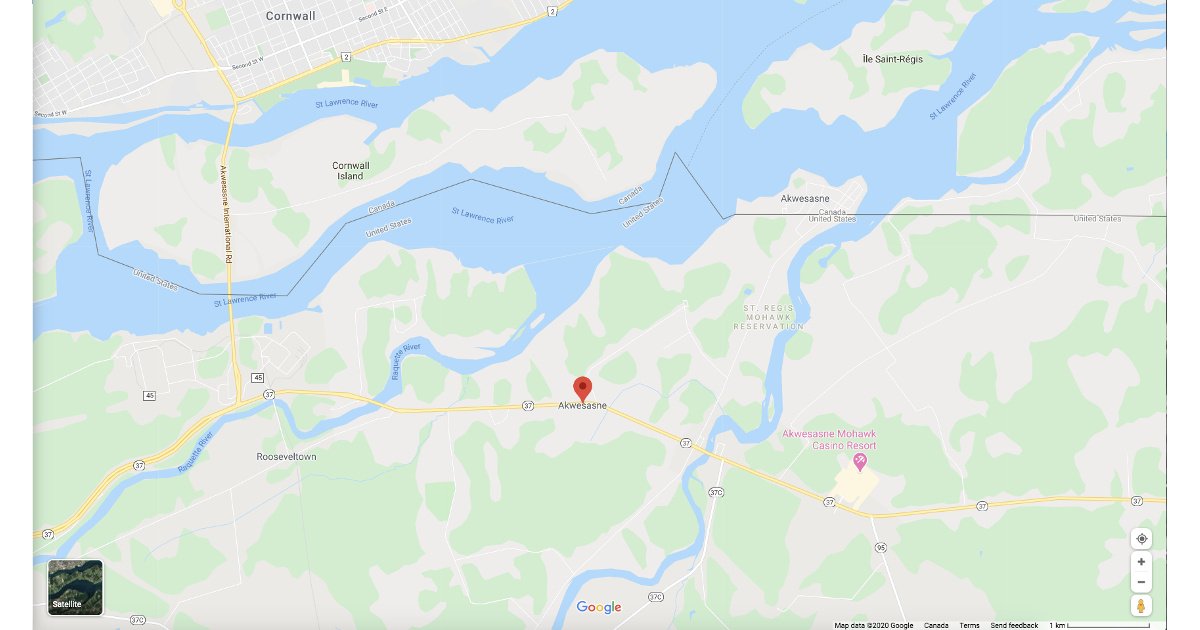 Above, a Google map showing the Akwesasne’s unique position on the border. ©Google

AKWESASNE — Akwesasne has marked its first case of coronavirus on the Mohawk reserve/reservation straddling two countries and three provinces across from Cornwall.

The infected individual was identified through the Franklin County Public Health Department, in New York, which notified the Saint Regis Mohawk Tribe and the Mohawk Council of Akwesasne yesterday.

It was not immediately clear in which section of Akwesasne the person resides, but the individual is in “quarantine at home and receiving follow-up care.” No additional information is “being released at this time due to patient privacy laws.”

Above, Cornwall Island, part of Akwesasne, as seen from the north shore of the St. Lawrence River in Cornwall.

The Franklin County Public Health Department has been investigating the individual’s case to determine exposure and those who may have been in recent contact.

Akwesasne has imposed its own version of the 14-day self-isolating rule for recent arrivals. Rather than requiring it of anyone crossing the Canada-U.S. border — which cuts right through Akwesasne territory and is freely crossed during day-to-day life on the reservation — tribal leaders instead demand it when “returning to the community from beyond a 50-mile radius of Akwesasne.”

“Please place the community’s health and safety as a priority, particularly those who are most vulnerable — our elders and those with underlying medical conditions,” the Saint Regis Mohawk Tribe and the Mohawk Council of Akwesasne says in a release yesterday.

Meanwhile, on the north shore of the St. Lawrence River, the Eastern Ontario Health Unit’s area of jurisdiction saw cases more than double over the weekend, from four to nine. That figure includes the first person in the EOHU to end up in an intensive care bed after contracting the virus — a Prescott-Russell resident now convalescing at the Cornwall General Hospital.