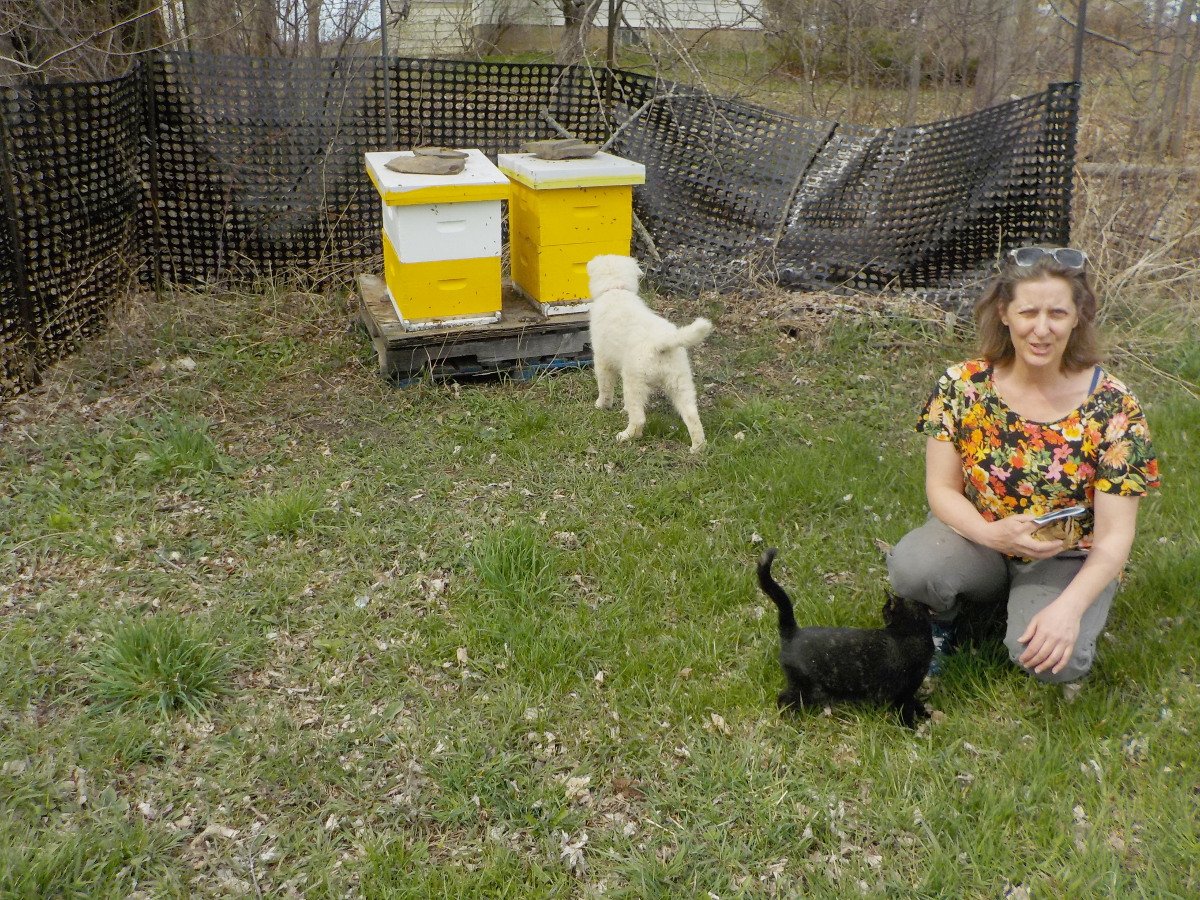 Above, Laurie McCannell with bee hives on her rural property.

VARS — A niche farmer in rural Ottawa’s south east corner is meeting with resistance in her ongoing efforts to persuade the city to drop its “fatally flawed” ditch spraying program she maintains is hazardous to pollinators.

Laurie McCannell produces eggs, apples, pork, honey and maple syrup on 25 acres along Frank Kenney
Road which she sells at the gate or at farmers markets now closed because of COVID-19. Early in May, McCannell registered her opposition against the use of Gateway and Clearview which she emphasized contain controlled chemicals especially harmful in aquatic sites.

“Gateway is persistent, highly toxic to fish and other vertebrates, and designed to float and be sticky,” she said, adding that many ditches in that part of the city flow south into neighbouring Russell Township where her parents own an apple farm.

McCannell is also objecting to Clearview broadcast to kill wild parsnip along rural roads. It’s a compound that she said will wipe out all kinds of plants, leaving only grasses behind. Both treatments, Gateway and Clearview, cause problems when in contact with crops or livestock. The active ingredient in Clearview, metselfuron-methyl, lasts at least two years in the ground disrupting root growth, she stated. Gateway contains alcohol non-ionic surfactants which must be downgraded at wastewater plants because of their toxicity.

The main ditch-spraying target is wild parsnip. However, both sprays also kill assorted shrubs, flowering plants, black locust trees which produce tresses of edible flowers that her bees love, and a wide range of other useful varieties such as milkweed, wild sage, buttercup, wild oats, knapweed, and wild willow which feed birds and butterflies as well as bees.

She maintained the sprays are harmful to fish, invertebrates, turtles, frogs, other amphibians and
species at risk that make their homes in the ditches. She wants to know what impacts there might be on groundwater recharge sites feeding into the Vars-Winchester Esker which supplies local wells.

An environmental activist, McCannell is recommending the provincial approach calling for digging up wild parsnip which, at three feet tall in the summer, is easy to spot: “Do this for two successive years and the plant will be gone. I wear gloves and a long-sleeved shirt … it really isn’t that hard.”

The second choice is to mow before the flowers open, also with a higher success rate than spray.

Should the city remain adamant about spraying, the market farmer proposes targeted spot-spraying
aimed strictly at wild parsnip, “not at bloody everything that isn’t grass.” And spray only in the suburbs where protection of the public from accidental exposure to noxious parsnip may be needed and not in agricultural and rural areas.

McCannell is disappointed with the city’s response to her detailed complaint, claiming official Anne Huneault didn’t fully address her concerns. Huneault maintains the chemicals don’t pose an
“unacceptable” risk to pollinators while McCannell counters that while they don’t kill them directly, they eliminate the plants on which they feed.

McCannell insisted the destruction of roadside vegetation important to her honey bees and other hives in the area could impact her crops including apples. Responding to Huneault’s information that there’s only light growth of wild parsnip along Frank Kenney and none closer to her farm than 330 metres, MCannell said that’s proof there’s no need for boom spraying in front of her place.

Huneault said the gradual shift to a wild parsnip maintenance program after initial eradication “may include” spot spraying. When product application directions are properly followed, Huneault said there are no “unacceptable” risks to aquatic organisms or drinking water.

Should the city proceed as planned, McCannell hopes to officially opt out of the program which she said was an option she selected in March but never received confirmation.