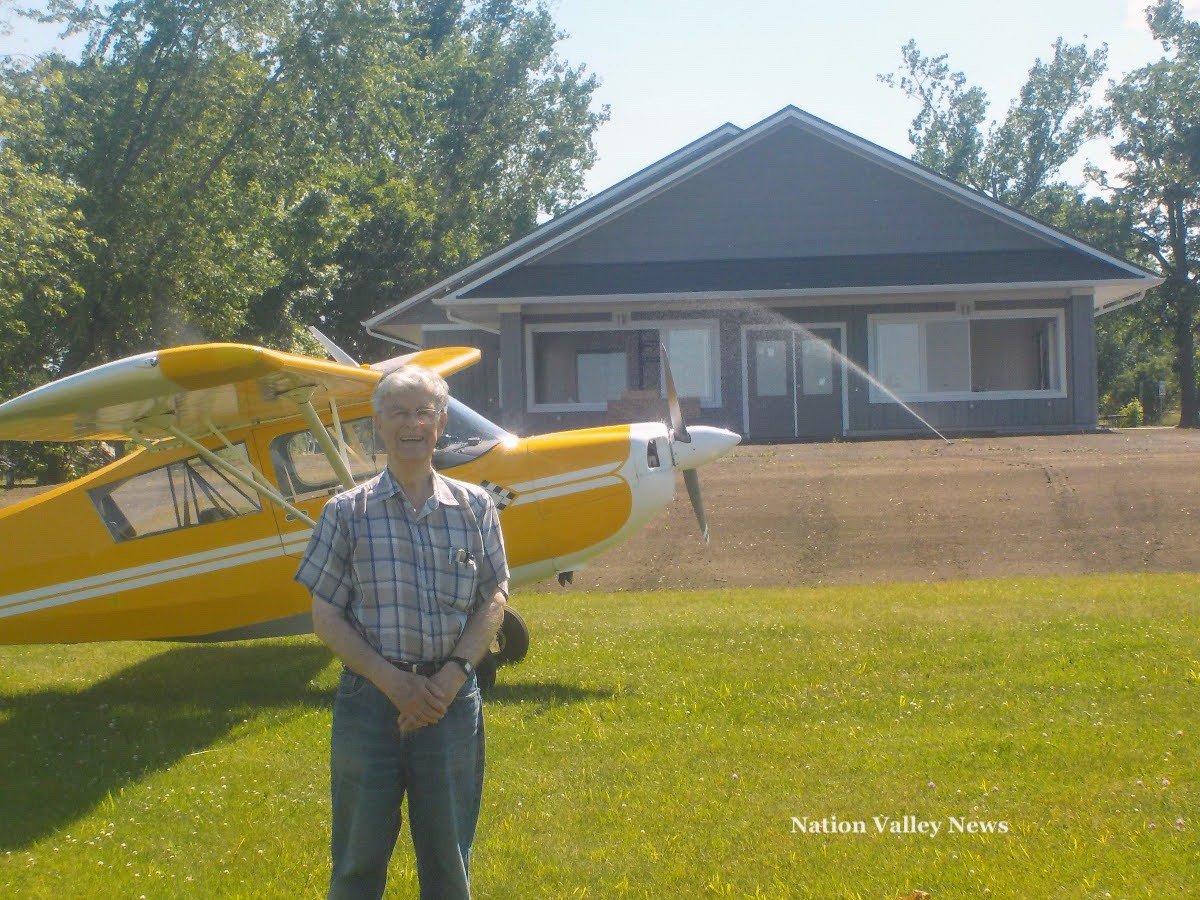 Above, on the Iroquois waterfront, John Ross poses with his airplane and the new multi-purpose municipal facility — to be named the John D. Ross Airport, Campground, and Lawn Bowling Building — which he played a key role in designing and personally funding.

IROQUOIS — John Ross has an effective way of shutting down opponents when it comes to overruns on his pet projects along the Iroquois waterfront: He simply offers to pay the difference out of his own pocket.

Take Ross’s crowning glory nearing completion on Carman Road, a multi-use building for the airport, 70-site campground, and lawn bowling club — an unusual combination, yes, but those users have been sharing space for decades! Some of the camp sites are expected to open shortly while the gleaming new building must adhere to COVID-19 regulations.

With a price tag originally estimated at $350,000, South Dundas council balked when it became apparent that, even with Ross, an engineer, overseeing construction free of charge, the building would cost at least $200,000 more. The newest estimate is $350,000 more than budgeted.

The retired founder of Iroquois’ Ross Video Ltd., who turned over the reins of the largest employer and among the largest commercial taxpayers in South Dundas to son David, casually indicated any extra cost could be billed to him. There’s a contract spelling it all out, confirmed South Dundas Mayor Steven Byvelds, including a provision to name the new building in Ross’s honour.

You could say Ross is fanatical about getting the Hydro Lands waterfront setup right, including proper drainage for the grass airstrip, walking paths laid out in the right places, campsites providing full services, and high-end accommodation for lawn bowlers left without a home after their former hangout at the nearby Forward House was condemned.

He’s been at it for close to half a century and is nowhere near running out of steam. In fact he’s picking up the pace, recently taking over leadership of the waterfront development committee along with the airport committee and the campground committee. He doesn’t lawn bowl — or camp, for that matter!

The new John D. Ross Airport, Campground, and Lawn Bowling Building is the big piece of the puzzle which allows everything else to fall snuggly into place. Ross, who resides on Highway 2 just east of Cardinal with wife Diane, is a details guy; that’s why the ‘’great believer in teamwork’’ spent hundreds of hours interviewing campers, pilots and lawn bowlers as to their requirements; what he learned led to several modifications including the overall size which for Ross is all part and parcel of “getting it right.”

Ross learned to pay it forward back in the 70s when, while looking for a new headquarters for what became his thriving business with sales around the world, he was travelling between his Montreal home and Toronto when he pulled into Iroquois to see old friend George Jackson. After hearing about Ross’s relocation trials, George showed him around Iroquois and said why not settle right here.

With two recreational aircraft hangered in Iroquois today and a pilot at the time, Ross liked what he saw, including the landing strip, proximity of major highways and the U.S. border, and local lifestyle. Then George sweetened the pot. He offered to sell Ross his own home overlooking the park and airfield at a reasonable price, with no down payment required, and all the time he needed to pay. The rest, as they say…

With Jackson in mind, Ross’s culmination of community enhancement is replacing a dilapidated former structure with the new building accommodating the three main users along with washrooms, showers, kitchen, meeting/party room, and a tourism office.

Ross proudly shows how the cement apron around the glassed-in front section is wide enough to accommodate tables, chairs and umbrellas for campers, pilots and guests, offering expansive views of the St. Lawrence Seaway and the lands transferred by Hydro in compensation for razing, relocating or inundating the old village to make way for the new commercial navigation route and a power dam at Cornwall.

While both he and his company gain modestly from the improvements in terms of creating a more attractive community to help lure new employees, Ross insists his volunteer work and benevolence are all about making Iroquois an even better place for the people already living there.

Along with pet projects, Ross has several pet peeves, one of which is that insufficient attention is paid to carefully designed drainage which can make or break an asset such as an airfield. Another is that municipal governments don’t seek out retired top talent living in their communities who’ll often work for free instead of always relying upon high-priced consultants.

How does council view its chief benefactor, a guy with the technical knowledge and the money to back up his stand? Ross can be a challenge, Byvelds admits, which isn’t a bad thing. And council and municipal ratepayers certainly appreciate his generosity over many years.