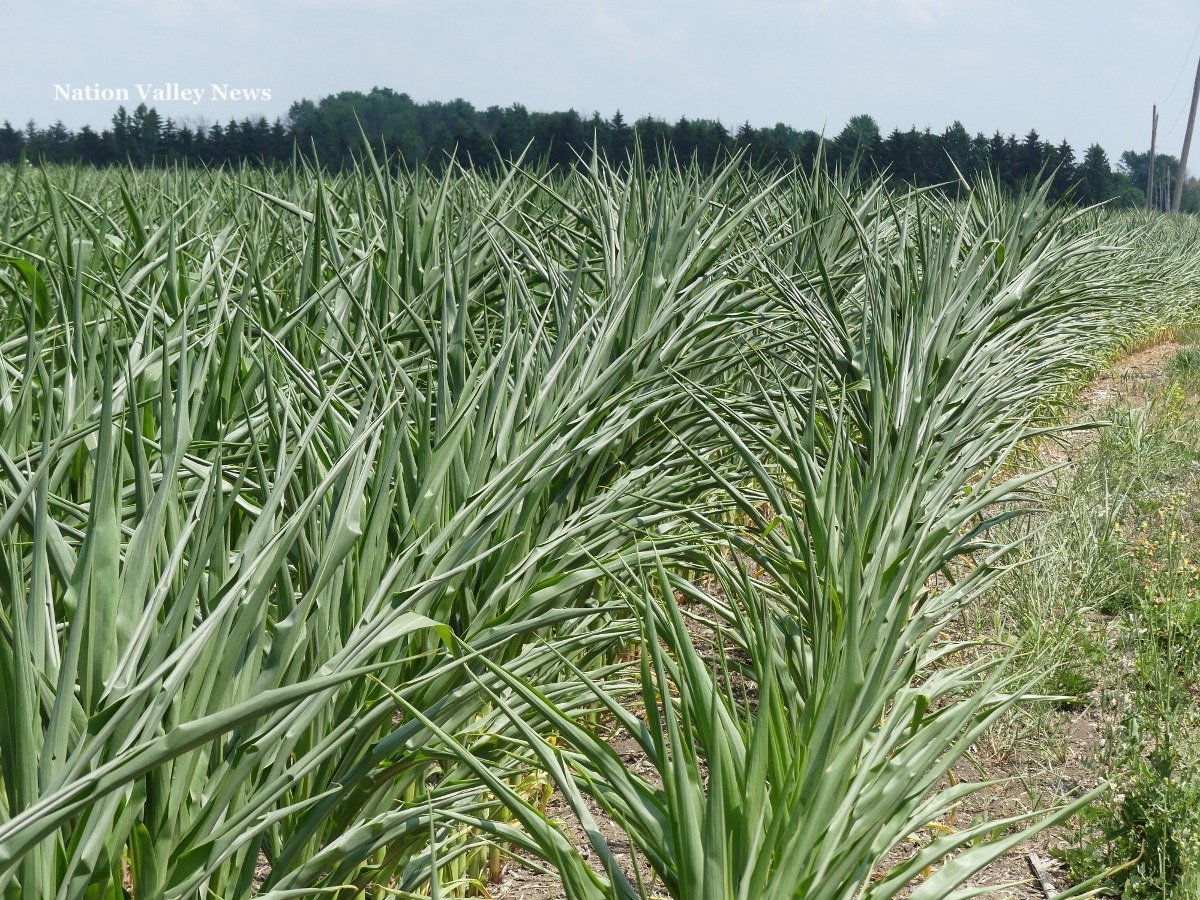 Above, lack of moisture is curling the leaves on a cornfield off Nation Valley Rd., Chesterville, giving the stressed crop a spiky appearance.

CHESTERVILLE — It’s like, on top of COVID-19 and all the anguish the virus has wrought, somebody issued a Scorched Earth order for Eastern Ontario.

Day after day for two weeks, breaking weather records along the way, temperatures have climbed above a scalding 30 degrees C, 90 degrees F on the kitchen gauge many older farmers still go by. Humidex readings have made it seem much hotter and whatever precipitation has occurred has been sporadic, temporarily sustaining some farms while leaving many others envious.

As a result, depending on location and other factors, some fields are scalded with few yet being considered a total write-off. Levels in streams, drilled and backup dug wells are low, risking water supply to both crops and livestock. In at least one case, water is being transported between farms.

There was even a blinding dust storm over Moose Creek earlier this week, a very rare phenomenon harkening back to Dust Bowl conditions of the Dirty 30s.

Below, a resident posted this Facebook video of the 1930s-esque sandstorm in Moose Creek on Wednesday.

Over the past two weeks, South Nation Conservation has confirmed, low water conditions throughout much of the 4,385 square-km watershed have worsened; a meeting of SNC’s Water Response Team Thursday elicited reports of dried-up streams, reduced crop yields, and increased pressure on municipal water supplies.

SNC is asking residents and businesses to reduce water consumption by 20 per cent and to limit non-essential uses. The Water Response Team will meet again July 23 to review conditions and discuss further steps which might be necessary.

Meanwhile, farmers like Holstein Master Breeders Warren and Trudy MacIntosh of Glengarry Stock Farms Inc., Apple Hill, are sweating it out, hoping for cooler, wetter times ahead. Now and then it seems to close… yet it remains so far!

The MacIntoshes were in bed earlier this week when Trudy nudged her husband: Was that what she hoped it was, a little sprinkle on the tin roof, maybe the serious rain they’d been waiting, hoping and praying for since May 25?

No. It was hardly enough precipitation to keep the dust down for a few minutes. This is the longest dry spell either of them can remember. Born in 1965, Warren says he just missed what is said to have been a worse year, 1962, when old-timers recall the government handing out Hay Stamps instead of Food Stamps to help drought-stricken farmers get feed for their livestock.

The MacIntoshes would kill for a few of the flash thunderstorms they hear farmers in other parts of the region have been getting.

One of the most frustrating parts of the drought — which will probably claim 140 acres of what started out as a great-looking MacIntosh corn crop if it goes on much past Sunday — is the sporadic nature of whatever rain comes in.

“My Agricorp rep called and told me they got an inch of rain in Alfred, which isn’t too far away,’’ Warren said, adding that he can no longer count on weather patterns between the Ottawa and St. Lawrence rivers bringing regular downpours.

“I’d been talking to the rep about 25 acres of beans we might have to write off and had to tell him we only got a few drops.”

A big impact is there’s no good grass out there, pretty much all of it baked to a crisp. Warren feels sorry for beef farmers with hardly anything for their animals to graze.

As for his 75 milking Holsteins, he hasn’t been letting them out to pasture because the heat makes them lethargic and affects production. Inside the barn, the fans help keep them cool and calm.

On another positive note, the three farm wells are still holding their own but the MacIntoshes are organizing backup plans just in case.

Stress on the main farm well is of great concern at Quinndale Holsteins, Greely, where they’re carting in water in tanks from another farm a few times a day to keep 50 milkers on pasture allowing the barn well to remain on reserve. 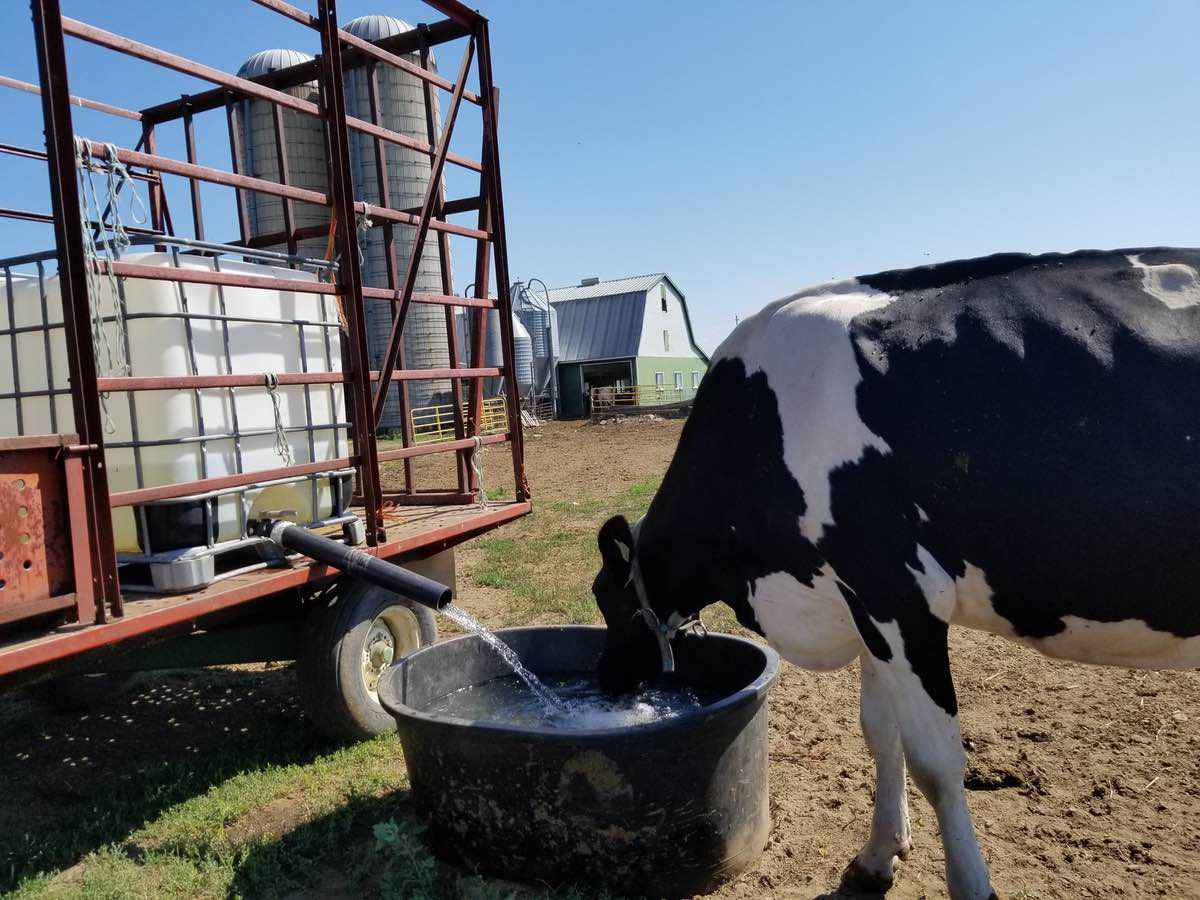 “We’re three feet to bedrock making it hard to deepen the well,” said Erin Quinn, joking that the water delivery system might not be pretty but it works. “And we’re surrounded by quarries which can be a drain.”

Over in the Perth area, Barb Keith-Badour declines to answer the question “How are your wells?” out of fear of “jinxing us”. She said yields in the area are coming in about half; however, so far she hasn’t heard of anyone forced to write off any fields.

Keith-Badour and her husband grow corn, beans and hay on 1,100 owned-and-rented acres between Balderson and Crow Lake: “We’ve seen sporadic showers … and I mean sporadic. The other day, a friend in Maberly 10 to 15 km away got a quarter inch and we didn’t get enough to measure in the rain gauge.”

In Osgoode, shepherd Colleen Acres has 470 acres of pasture, hay, spring barley and corn. The barley is showing stunted growth probably leading to straw shortages; while there may be a second cut of hay, it’ll be significantly reduced.

In the barns, meat chickens aren’t taking the humidity well while special attention must be given to lambs to keep them cool, eating, with lots of water and airflow.

“A quick shower passed through but we need much more to make any difference. It’s probably too late for the barley but it would help out the alfalfa.”

In Russell Township, Tony Baas last experienced a rain shower June 6. He said early-planted crops are hanging in while later-planted are in bad shape. While his wells are down, they’re still providing.

“I have 40 acres of beans planted June 8 with some spots still trying to germinate.”

President of the Grenville County Federation of Agriculture Adrian Wynands said sporadic rains and substantial groundwater have kept crops in his area viable for the most part. Wynands decided to pass on about 20 acres of second-cut hay in one field because it wasn’t good enough to warrant the cost and effort of taking it off.

Milk production is down 10 to 15 percent in his 75-head herd which is feeling the heat … just like the humans trying to manage the cows: “We just can’t take a day off because the heat and humidity is getting to us.”

Happily, 82 acres of corn and 30 acres of beans the Grenville Federation is raising for the Canadian Foodgrains Bank global charity is doing well on low-lying fields thanks in part to an inch of rain two weeks ago. On the other hand, 16 acres of Foodgrains wheat is stressed and might not make the cut.