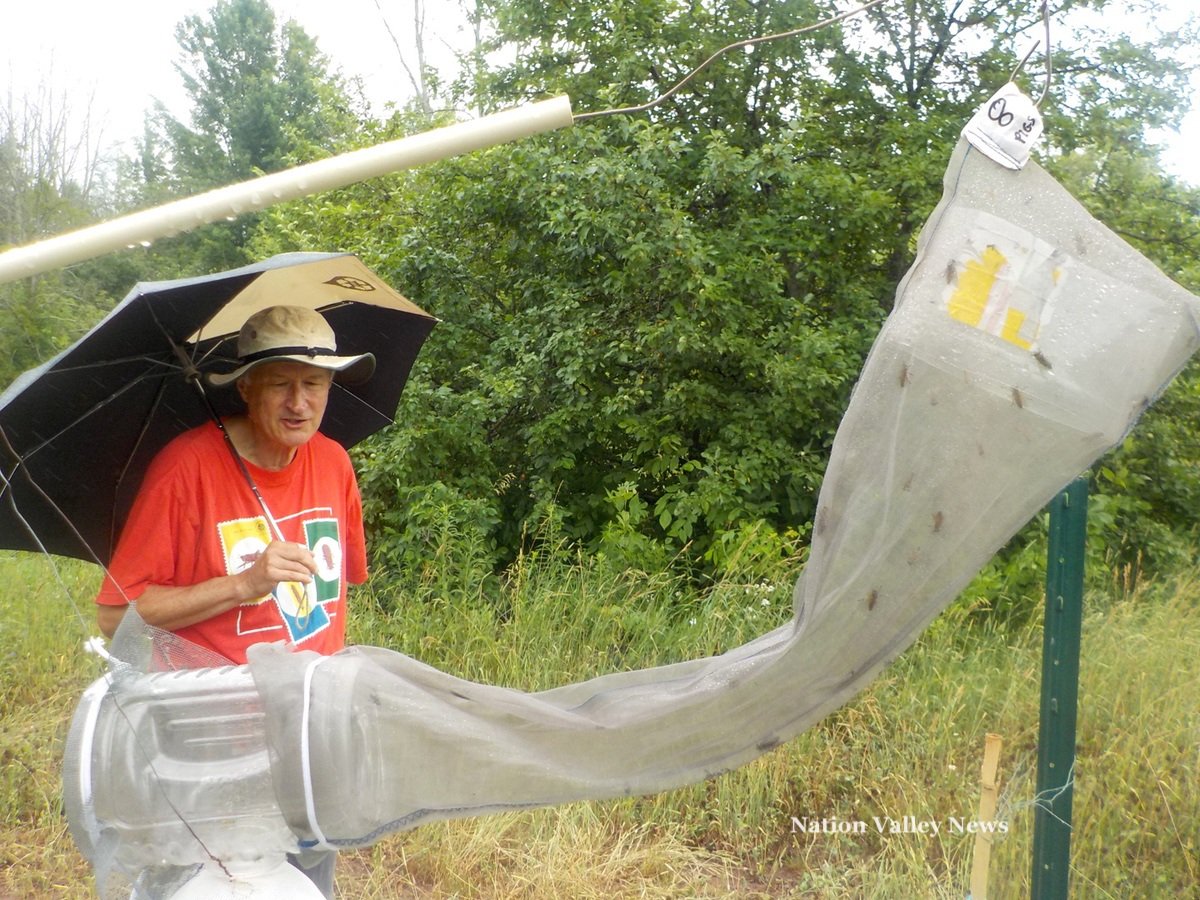 Above, Dr. Steve Mihok with a side-profile view of his Nzi Trap, at work around the world but also catching its share of horse and deer flies at his place in Russell. Nation Valley News photo by Tom Van Dusen

RUSSELL — He’s Russell’s Fly Guy! Not only does Dr. Steve Mihok find horse and deer flies fascinating, he has worked up close and personal with tsetse flies, the scourge of the Dark Continent.

In fact, it was in Africa where Mihok first got into flies… as in investigating methods of reducing and managing over populations of the perennial pests.

And that’s where he developed the elaborate Nzi Trap, an assembly of wood or metal supports, cloth, netting and sometimes Plexiglass panels. Nzi is Swahili for fly.


Now in use in different places around the world, Mihok never patented the device, believing that it should be available to all who might need it. When first introduced, Mihok was attached to the International Centre of Insect Physiology and Ecology in Nairobi, another reason the design has remained in the public domain.

Royalties would have been handy this summer when, idled by COVID-19, retired federal government scientist Mihok decided to return to his fly-catching experiments after more than a decade… and not in Africa but in Russell Township where he resides.

He has used his own money to cover costs of supplies and building several traps placed in various places around Russell Village. Exact locations remain secret to avoid potential vandalism.

These days, much of Mihok’s time is normally occupied with music, as a guitarist, singer, songwriter, arranger and leader of the practice Castor River Crew folk-rock band attached to the Russell Music Academy where Friday Open Mic Nights were a must-do. But the academy is closed because of COVID and live performance opportunities have dried up… so he dusted off the old fly trap plans!

The entry point of the fly trap draws the insects with its colour and scent. Nation Valley News photo by Tom Van Dusen

He admits it’s far from the glory days back in the Rift Valley of Kenya when one trap could deliver a mixed bag of up to 30,000 tsetse, horse and stable flies to be passively removed from circulation providing at least a limited break to humans and livestock in the immediate vicinity.

Traps were bated with low doses of cow urine and acetone; but biting flies are also drawn to more manageable mushroom scent which Mihok uses in his latest round of traps. Flies are also attracted by the blue and black colours used in the traps, entering to investigate only to be snagged in a cone of netting which can be removed to dump the prisoners.

There’s some collateral damage with good bugs captured in the process, including the occasional butterfly; Mihok attempts to liberate them when dealing with the traps.

Mihok’s face lights up when he tours visitors through his trap camp in North Russell, describing the catch, urging them to take a close look at the surprising psychedelic appearance of deer fly eyes. His local experiments show, he says, a use for the traps near North American barns and stables.

The beauty of the technology, Mihok explains, is that it’s accessible, affordable and easy to assemble for everyone. The main drawback is that the particular shade of blue preferred by the flies is becoming harder to find; he was able to get hold of some and hand dye the cloth he needed.