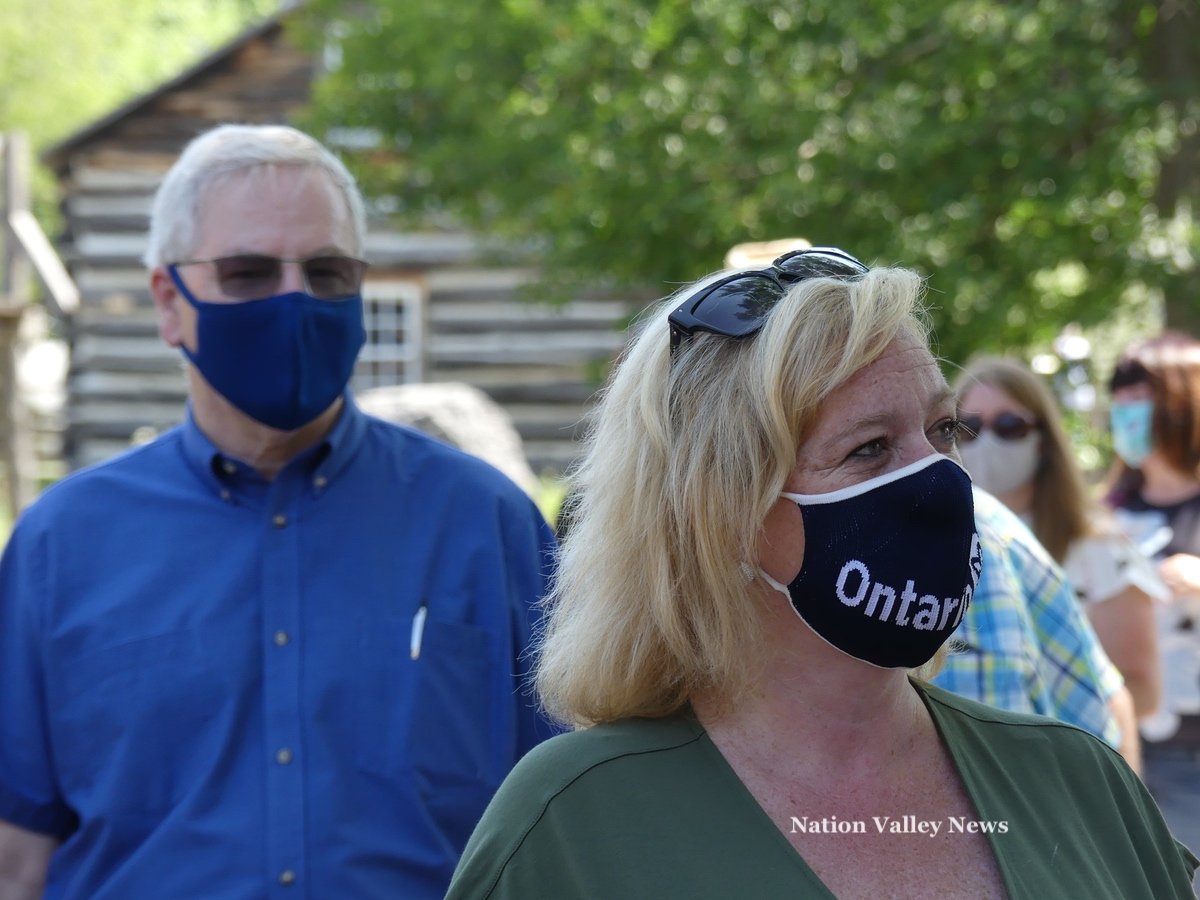 MORRISBURG — Buffeted by the impact of the COVID-19 pandemic, the tourism-dependent St. Lawrence Parks Commission (SLPC) is getting more than $7-million from the province, including a $2-million operating grant for Upper Canada Village (UCV).

Ontario’s Minister of Heritage, Sport, Tourism and Culture Industries, Lisa MacLeod, announced the funding at the local attraction this morning.

“It’s important to remind people that it’s safe … provided we’re wearing our masks and continue to social distance and continue to wash our hands,” said MacLeod during remarks in front of Crysler Hall at UCV.

“We recognize that things aren’t going to be the same for quite some time,” she added, “but we want to make sure that Pumpkinferno — if it doesn’t happen this year the way it was planned — will be able to survive and thrive in 2021.”

The sectors for which she is responsible as minister were “hit first, the hardest” by the pandemic and will “take the longest to recover,” she observed. In UCV’s case, “we want to make sure we continue to attract visitors here again and welcome school children back to this wonderful facility, and support so many of the activities that … our wonderful team here … does.”

Noting her visit coincided with “a time that we need hope,” MacLeod pointed out that Ontario entered Stage 3 of the restart process a day earlier. “It truly is a result of 14 million Ontarians coming together to protect each other during these difficult times.”

Below: the minister’s remarks. Village interpreter Milton Kooistra also leads the minister on a tour of UCV.

For tourism, that difficulty includes not having American visitors this year as well as an ongoing fear of COVID-19, conceded SLPC Vice-Chair Bruce Wylie. “But we are going to be able to have a ‘staycation,’ and I know a lot of people in this area are doing exactly that … You can go to all of the attractions from Fort Henry all the way up to Upper Canada Village.”

“I think that there has been a great deal of fear,” acknowledged Minister MacLeod, in response to NVN’s question about a penchant by some locals to frown upon Quebec licence plates at area beaches this summer — some even calling for the closure of the provincial border — and whether such attitudes could leave a damaging impact on interprovincial tourism after the pandemic.

“We’re seeing it as well just within the province, with different communities that typically welcome visitors from the GTA or Ottawa … there is a reticence, but I think we’ll heal that,” she said of the “social crisis” that has been part of the pandemic.

The tourism recovery plan is only its first phase, MacLeod also noted, and currently involves a “hyper-local” strategy of reconnecting with fellow Ontarians. The planned second effort will promote staycations within province and, eventually, across the country, “once it is safe to do so,” said the minister, who confers weekly with her provincial and federal counterparts.

A third marketing phase will kick in with the resumption of international air travel into Ontario after the development of a COVID-19 vaccine, a timeline as long as four years from now, according to MacLeod. “I don’t want to sugar-coat that.”

“We have been writing the playbook as we learn to play the game,” she said of the situation, “and this is uncharted territory.”

South Dundas Mayor Steven Byvelds — whose municipality is home to UCV — used the occasion to hand-deliver a letter to the minister requesting provincial support for a proposed sports dome — estimated at $4-million — the municipality would like to erect in Iroquois.