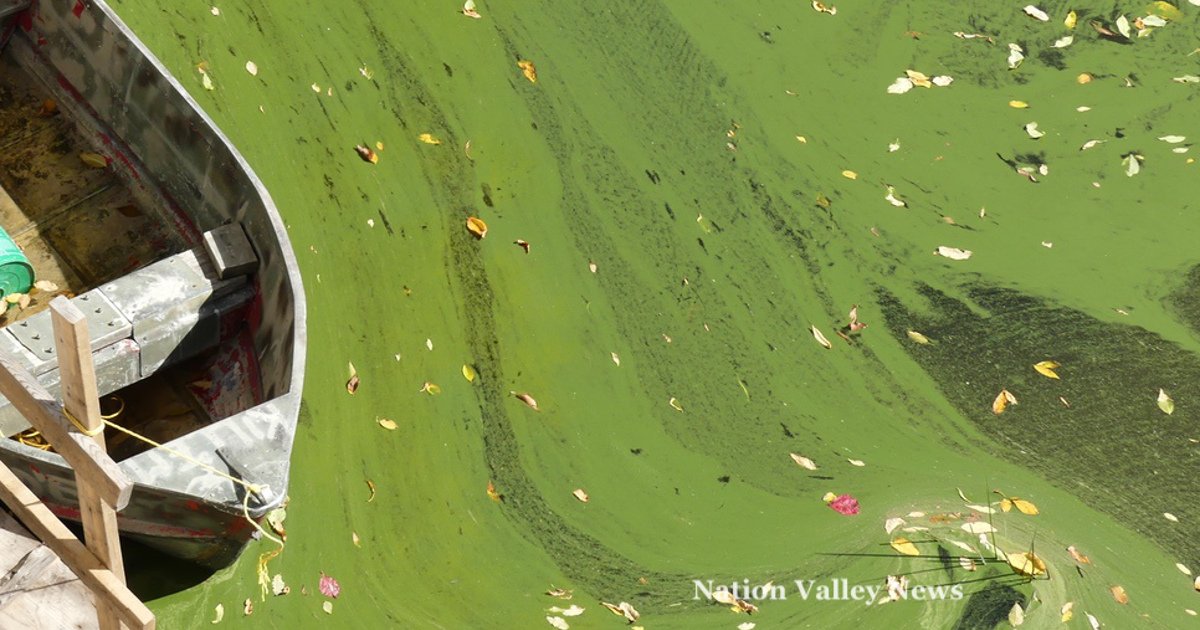 Above, the South Nation River, as photographed from the top of the Chesterville Dam on Sunday, Sept. 29, 2019. While not confirmed as a blue-green algae bloom at the time, it does resemble the official blue-green algae photo in the article below.  Zandbergen photo, Nation Valley News

A photo of blue-green algae from the Ontario Ministry of Environment, Conservation and Parks web page on the subject.

The EOHU advises people using surface water for recreation or drinking to become familiar with the potentially harmful algae so they can make informed decisions on when to avoid contact with the
water.

Blue-green algae occur naturally world-wide and thrive in warm, shallow, undisturbed water that receives a lot of sunlight and that is rich is phosphorus and nitrogen. Animal and human waste and fertilizers containing these chemicals can contaminate water, which amplifies the growth of blue-green algae.

Some species of cyanobacteria produce toxins that are harmful to humans and animals. Toxins can irritate the skin and if ingested, can cause diarrhea and vomiting. At high enough levels, including from long-term exposure, the toxins may cause liver and nervous system damage.

Those making use of local lakes and rivers are encouraged to watch for algae blooms. Dense blue-green algae blooms may make the water look like pea soup and can appear as shades of blue, blue-green, yellow, brown, or red. When a bloom is very large, algae may form solid-looking clumps. Fresh blooms often smell like newly mown grass; older blooms smell like rotting garbage.

People living near suspected, detected, or visible blooms are advised to follow these safety measures:

• Do not use the water for drinking, food preparation, bathing, or showering.
• Do not allow children, pets, or livestock to swim in the water or drink the water.
• If skin contact does occur, wash with soap and water or rinse thoroughly with clean water to remove the algae.
• Do not boil the water. Boiling will not remove the toxins and may release more of the toxin into the water.
• Do not cook with the water because food may absorb toxins from the water during cooking.
• Do not rely on water jug filtration systems, as they do not protect against the toxins.
• Do not treat the water with a disinfectant such as chlorine bleach. This may break open algae cells and release toxins into the water.
• Avoid eating fish caught in affected water.
• The liver, kidneys, or other organs of fish caught in affected water should not be consumed.