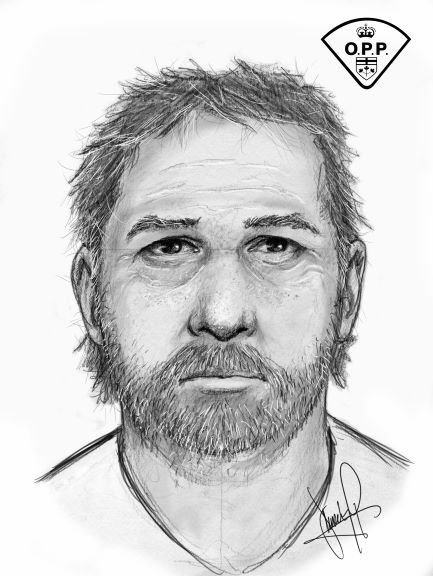 HARMONY CORNERS — A manhunt was underway in North Dundas last night as the SD&G OPP searched for a suspect who approached and stabbed an adult female motorist, sending her to hospital with non-life-threatening injuries.

The detachment’s crime unit descended on the area with multiple cruisers and one or two reported helicopters after responding to the incident on Spruce Drive, near Harmony Corners, shortly before  6:10 p.m. The OPP Emergency Response Team and Canine Unit also took part in the search that failed to find the suspect.

Police say the victim was driving a car when she came upon the man by the side of the road. He assaulted her with an “edged weapon” before fleeing on a red bicycle. The injured woman, who did not know her assailant, suffered a stab wound.

In addition to releasing a composite image of the suspect Sept. 24, police have also clarified some of the details about his appearance, no longer saying he had a buzz cut. Approximately 50 to 60 years old, he’s described as caucasian, 5’5″ to 5’7″ in height, with a slim build and weighing approximately 160 pounds. He had facial hair and blue shirt, blue pants and blue canvas sneakers.

Last seen on Spruce Road and Marionville Road, he was riding that red bicycle — a 10-speed with possible silver handlebars that were straight and not curved like most bikes of that type.

“What got her to stop is undetermined,” said SD&G OPP Const. Tylor Copeland of the victim, explaining that investigators had yet to receive her full statement as she was being treated in hospital. Similarly, the detachment hasn’t yet determined the assailant’s motive. “How the event transpired is still undetermined,” Copeland repeated. “We’re in the initial stages of the investigation.”

Police are requesting the public’s assistance in identifying the suspect. Anyone with knowledge of this incident or who may have seen the involved individual on Ormond Road, Marionville Road or County Road 31 in the Winchester area is asked to call the SD&G OPP to speak with the investigating officer, Detective George Mikhail (1-888-310-1122).

Investigators would also like to speak with any witnesses or anyone who may have seen or recognize the individual in the sketch. They’re also looking for anyone with an onboard vehicle camera who may have travelled that roadway or surrounding area between 5 and 7 p.m. on the day of the assault.

Asked why the detachment didn’t send out an emergency broadcast advising residents of the affected area to shelter in place, Copeland noted that “every situation is different.”

“In this case, investigators determined the individual did not pose a significant public safety risk,” Copeland said by email. Consultations were held on whether such a move was warranted, he said later, “as it always is. Public safety is number one.”

He also told NVN that the investigation has been receiving tips and public assistance.

This article was updated to include new information from the SD&G OPP.

Tipsters wishing to remain anonymous may call Crime Stoppers at 1-800-222-8477 (TIPS) — or submit a tip online at www.seawayvalleycrimestoppers.ca — where they may be eligible to receive a cash reward of up to $2,000.

This article was updated and edited to include the composite image and the latest police information on the suspect’s description.