Bryce Stuart, almost 8, appears with Karen Parker, with $750 collected for him and two other causes from Canadian Pacific Railway Managers Gregory Montgomery (left) and Brandon Daynard. Individuals in the photo are spaced the appropriate distance, fore and aft of each other's respective position. Zandbergen, Nation Valley News

CHESTERVILLE — Perhaps not everything in this world has gone off the rails.

The dollars will be split three ways: for Chesterville’s Bryce Stuart, 7, who lost most of his foot in a lawnmower accident last year; for South Mountain’s Ben Brown, 3, whose challenges include hydrocephalus and cerebral palsy; and for the Porteous family, whose Ormond dairy barn burned down Oct. 4.

The handover took place this morning at the Main Street North railway crossing where crews have been busily converting the spur line into a single track. Bryce and his parents were on hand to see CP managers Brandon Daynard and Gergory Montgomery turn over the cash to local hairdresser and community activist Karen Parker for dispersal to the recipients.

Parker is not only good friends with Ian and Tracy Porteous, she has also spearheaded fundraisers to assist Brown and Stuart. 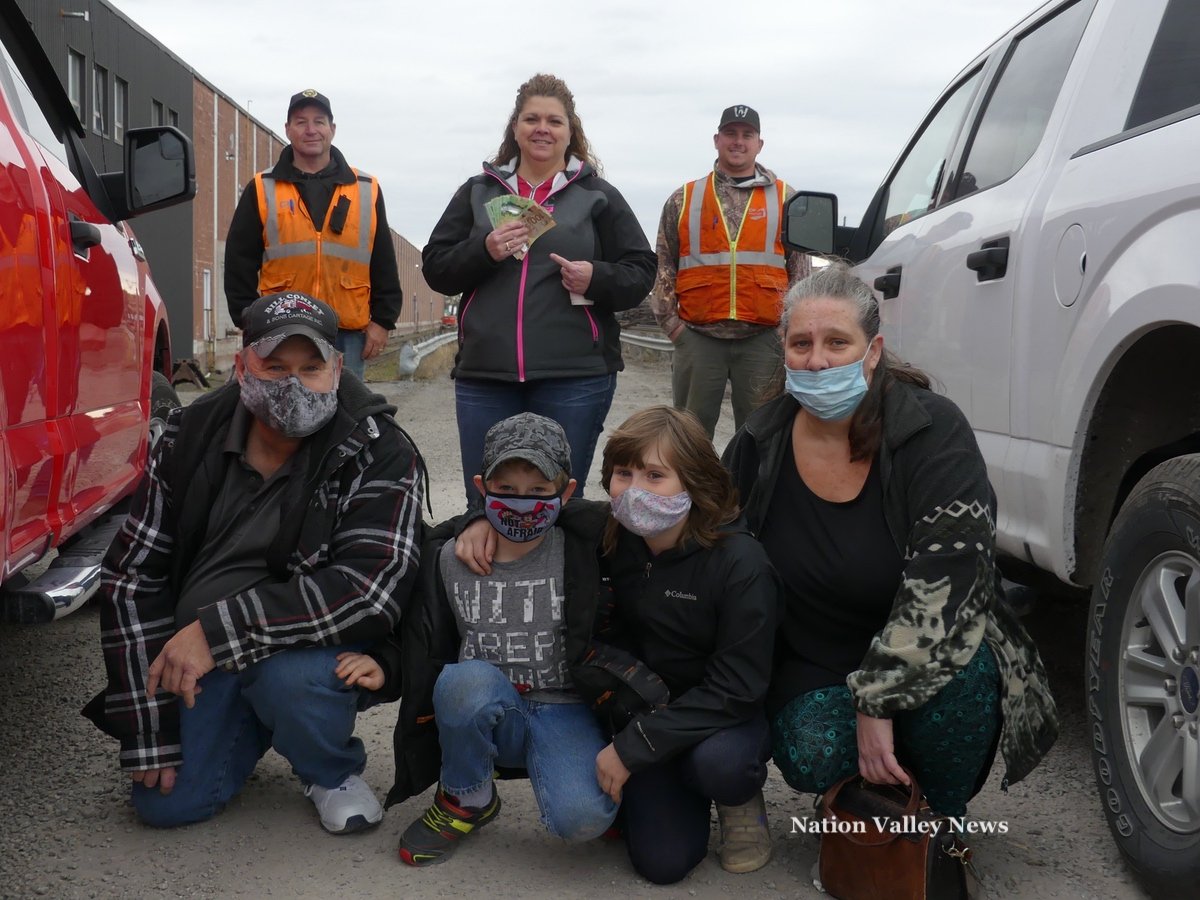 Front, from left, Darren, Bryce, Mikayla and Jennifer Stuart. Karen Parker holds the $750 collected for causes including Bryce, with Canadian Pacific Railway Managers Gregory Montgomery (left) and Daynard. Individuals in the photo are spaced the appropriate distance, fore and aft of each other’s respective position, and the front row are part of the same household. Zandbergen, Nation Valley News

Her name had come up when Daynard and Montgomery were looking for someone in Chesterville who may be a point of contact with local people who could use the $750.

“We both went to different businesses in town here, and they both gave the same name [of Karen Parker],” said Montgomery, a resident of Pembroke.

“Somebody’s got to step up to the plate and help these families, and we live in … the most amazing place to live,” explained Parker, who admitted her surprise when Andy Cotnam at Ace Hardware messaged to put her in touch with the CP reps.

Crediting her parents with instilling her personal sense of responsibility to the community, she explained to the small gathering:  “It’s not Amazon that’s going to help you when your barn burns … it’s your Rotary, it’s your Lions’ Club, and it’s the people in your community that are going to help.”

Bryce’s mother acknowledged the great community support her boy has already received from the community, with over $30,000 raised at a dance organized by Parker and others last year. The money raised will assist with the cost of new prosthesis upgrades as the youngster grows up.

“The way the community supported us and him, I don’t know what we would have done without everybody. It’s been absolutely wonderful,” said Jennifer Stuart.

Below, Karen Parker speaks with “The Hairfellas” online show in British Columbia about her recent fundraising efforts for Ben Brown of South Mountain, with a shout-out to publicity achieved through Nation Valley News.