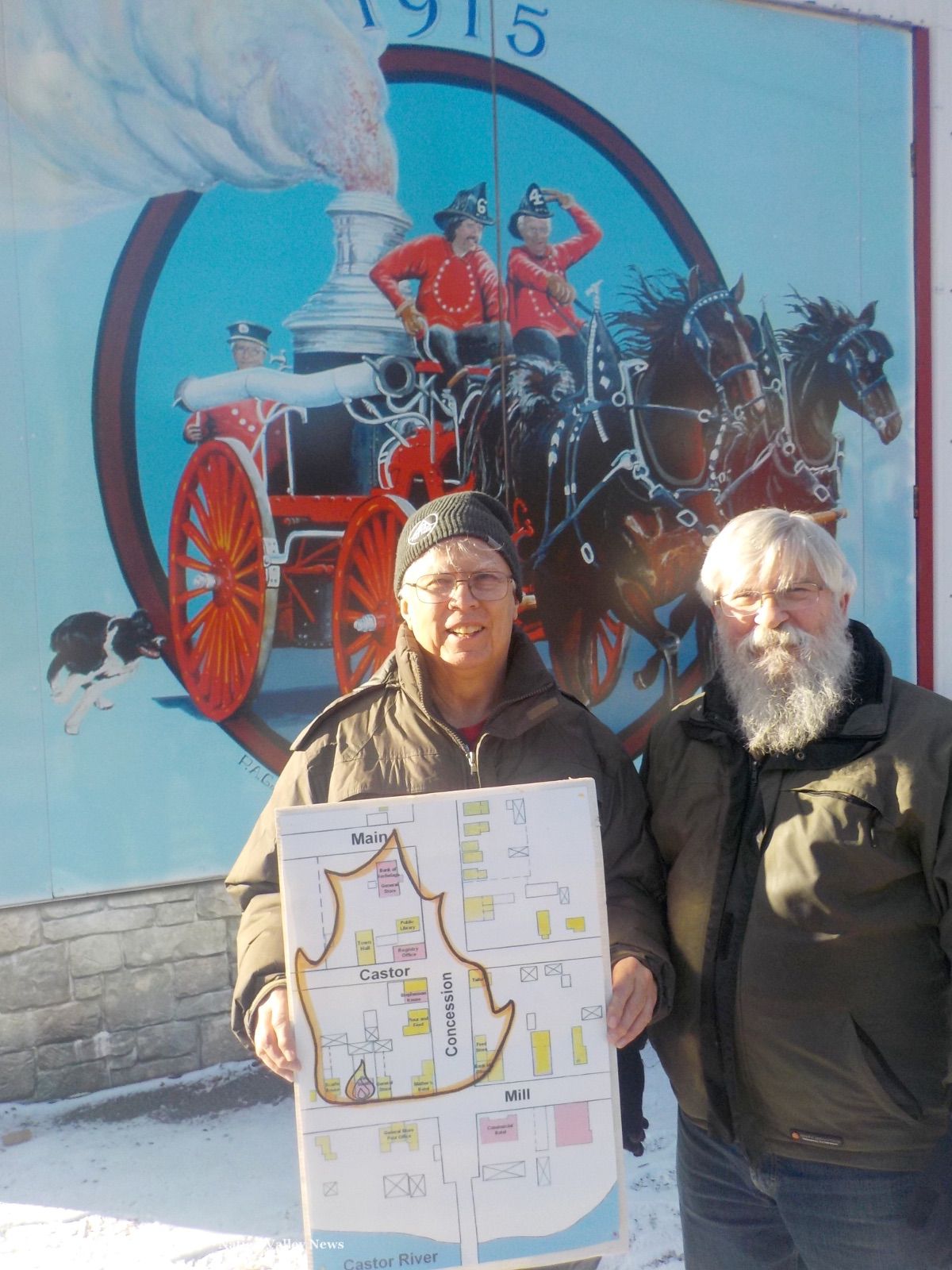 Above: Harry Baker and Paul Deveau hold a map showing the Great Fire of 1915 destruction zone. Behind them on the Firehall Museum is an illustration of firefighters rushing the Silsby pumper to the scene. Van Dusen photo, Nation Valley News

RUSSELL — Have you ever wondered about the circumstances of Russell’s Great Fire of 1915 and the old steam pumper that saved the day… but haven’t found time to research it?

Or how about the economic impact of the New York Central Railway which once ran passenger and freight trains several times a day through Russell and Embrun… not to mention hauling that steam pumper to the scene of the Great Fire?

Well, thanks in part to COVID-19, these topics and several others are explained in short-form vignettes now being produced by the Russell Village & District Historical Society as coordinated by president Harry Baker who says they go a long way in making the historical record more accessible.

The project is due partly to C-19 because putting the brakes on many routine activities freed up enough time for Baker and other participants to tackle a proposal suggested in the past to take some of the most significant aspects of local history and immortalize them in illustrated online story form.

Like many other organizations, the society has gone online during the pandemic for regular meetings and other activities, including a recent Country Christmas concert by Osgoode’s Gallagher Family. Last year, the concert was staged successfully live and the idea — which the Gallaghers favoured — was to recreate some of the seasonal cheer within COVID conditions.

The vignette project was a logical fit for the times. The society operates the heritage Church Museum, located on Concession Street next door to the Firehall Museum annex; all of the artifacts and information needed to put together the series of slide and dialogue presentations on major historical moments are contained within the two buildings.

All Baker needed was technical and creative help. For that he enlisted Paul Deveau as photographer and recorder, Morley Verdier in research, and Nation Valley News reporter Tom Van Dusen as narrator. Van Dusen got the nod because Baker wanted semi-professional “talent” but he didn’t want to pay for it.

To date, seven vignettes have been completed ranging in length up to more than eight minutes. They cover such diverse topics as the storied Russell Brick Works, descriptions of the local doctors and dentist offices, Loucks Barber Shop, the Great Fire and two pieces on the New York Central.

There are another five or so vignettes to come in the New Year. They can be accessed free of charge on YouTube under Russell Historical Vignettes.

The latest vignette tells the movie script-style story with photos from the scene of the Great Fire which erupted early on a June morning in Bernard Murray’s tinsmith shop. Bucket brigades were organized but they couldn’t quell the spreading blaze. Calls for help went to Metcalfe and Ottawa.

The Ottawa Fire Department loaded a now legendary Silsby steam pumper onboard a New York Central flatcar along with 1,000 feet of hose, other equipment and a firefighting crew. A team of horses was waiting at the Russell end and rushed the Silsby to the Castor River where it began pumping two streams onto the fire.

Although 25 buildings were destroyed in the village core — a total loss valued at about $80,000 in 1915 dollars — there was general agreement damage would have been much worse without the Silsby’s valiant effort.

The Little Fire Engine That Could was purchased from Ottawa and became the foundation of Russell’s first volunteer fire brigade. It remained in service until 1955 and is currently in the Bytown Fire Brigade’s vintage collection.