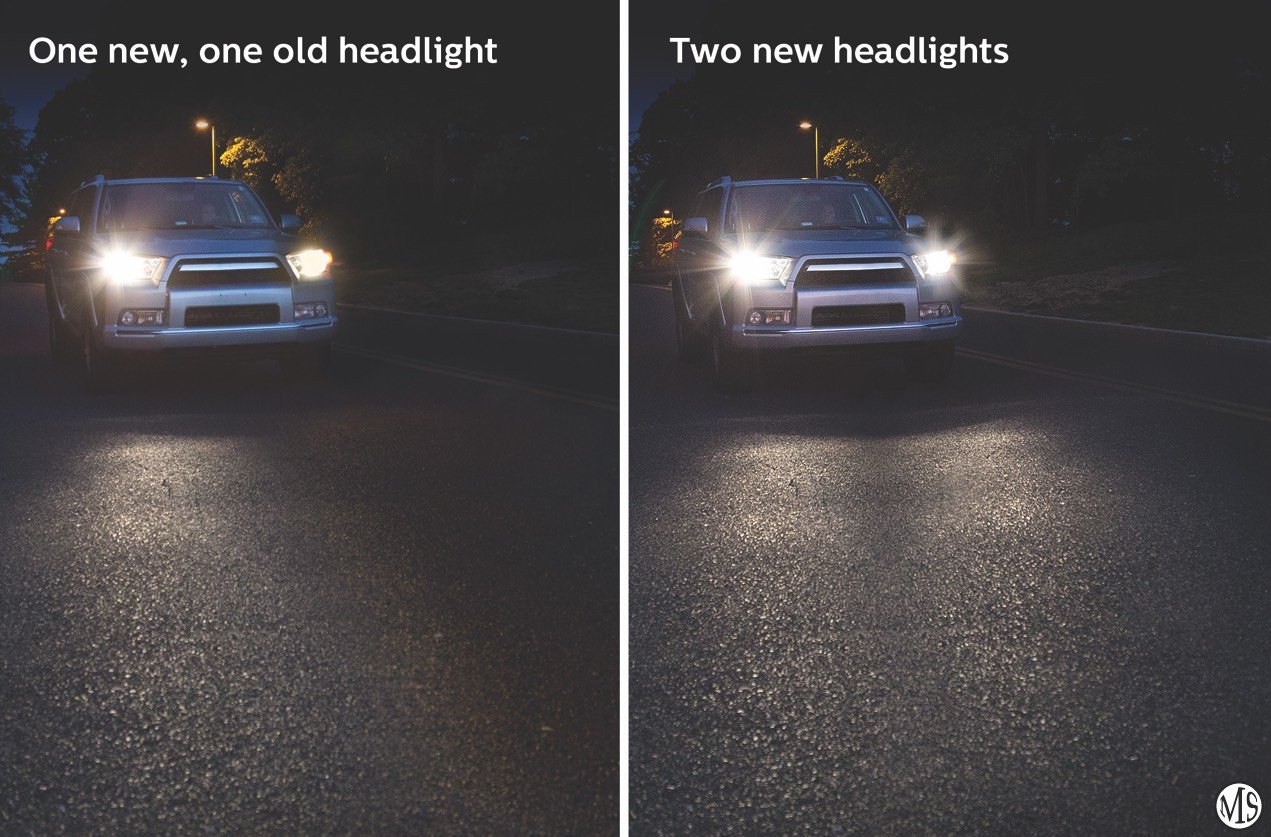 Above: Consistent light output from both headlights makes the road safer for drivers, their passengers and oncoming motorists.

When it comes to vehicle maintenance, professional automotive technicians and organizations that promote safe driving have always advocated replacing certain safety components in their vehicles, such as tires, brakes, shocks and wiper blades, in pairs.

Replacing parts in pairs ensures that the vehicle is properly balanced and functioning safely. But it’s not just tires, brakes and shocks that should be replaced in pairs. Vehicle lighting plays an integral role in keeping drivers and their passengers safe, and motorists should exercise the same level of caution regarding their vehicles’ headlights, taillights, and turn signals that they do with other parts of their cars and trucks.

Why replace aging headlight bulbs?
Most drivers are not aware that headlight bulbs can wear out and degrade over time. As a result, headlights are often overlooked when drivers conduct routine vehicle maintenance. As they age, headlight bulbs put out less light, which can dramatically compromise visibility at night, when drivers’ visual acuity is already naturally reduced by as much as 70 percent.
According to Lumileds, a leading lighting solutions company for the automotive industry, headlight bulbs begin to project significantly less light within two to three years of their initial installation, producing dimmer light outputs that can compromise the safety of drivers and their passengers.

Why replace bulbs two at a time?
Though replacing both headlight bulbs when only one is dimming may seem unwarranted, maintaining a consistent light output from both headlights makes the road safer for drivers, their passengers and oncoming motorists. When only one bulb is replaced, the resulting light output can be both unbalanced and unpredictable, providing inadequate lighting that can compromise driver visibility. In addition, when one bulb burns out or starts dimming, the other bulb will likely follow, forcing drivers to deal with the expense and inconvenience of getting it replaced all over again.

How else can drivers improve visibility?
In addition to properly maintaining their headlights, drivers can take the following proactive measures to make nighttime driving safer.
• Replace worn out wiper blades each season or in three-month intervals to ensure adequate visibility during rain or snow.
• Clean interior glass and mirrors to remove any film-like buildup that reduces vision and creates hazy reflections from the sun. This is especially important for smokers who smoke while driving.
• Don’t hang accessories on rearview mirrors. This includes fuzzy dice, photos and other items that can be distracting and block your vision.