ROCKLAND — Every resident of Ontario’s five eastern counties and the City of Cornwall who want it will most likely have been vaccinated by June 1.

The prediction is dependent, of course, on a steady flow of Pfizer and Moderna vaccine from the province, emphasized Medical Officer Dr. Paul Roumeliotis who made it during the opening here of the Eastern Ontario Health Unit’s largest clinic to date.

With full cooperation from the Municipality of Clarence-Rockland, the clinic has been set up in the Jean-Marc Lalonde Arena. Roumeliotis lead a flock of reporters on a tour of the facilities Friday afternoon.

He joined Clarence-Rockland Mayor Guy Desjardins in welcoming news media to the site which, on Day 1, vaccinated about 300 residents in the 80 and above age category… to be expanded Monday to include those 75 and up.

Roumeliotis saluted the municipality as an excellent partner that made some accessibility improvements to the arena in preparation, and provided bylaw department staff to help volunteers and health unit personnel operate the clinic. After assessing the first day of operation, Roumeliotis said some small adjustments will be made to the layout.

He escorted reporters past 10 injection stations, each staffed by three people; depending on demand, it’ll be expanded to 20 stations, with a large centre waiting area.  To one side, two workers were inserting vials of vaccine into syringes for injection. Roumeliotis explained a large space like the arena was needed to ensure easy circulation by aging clients. 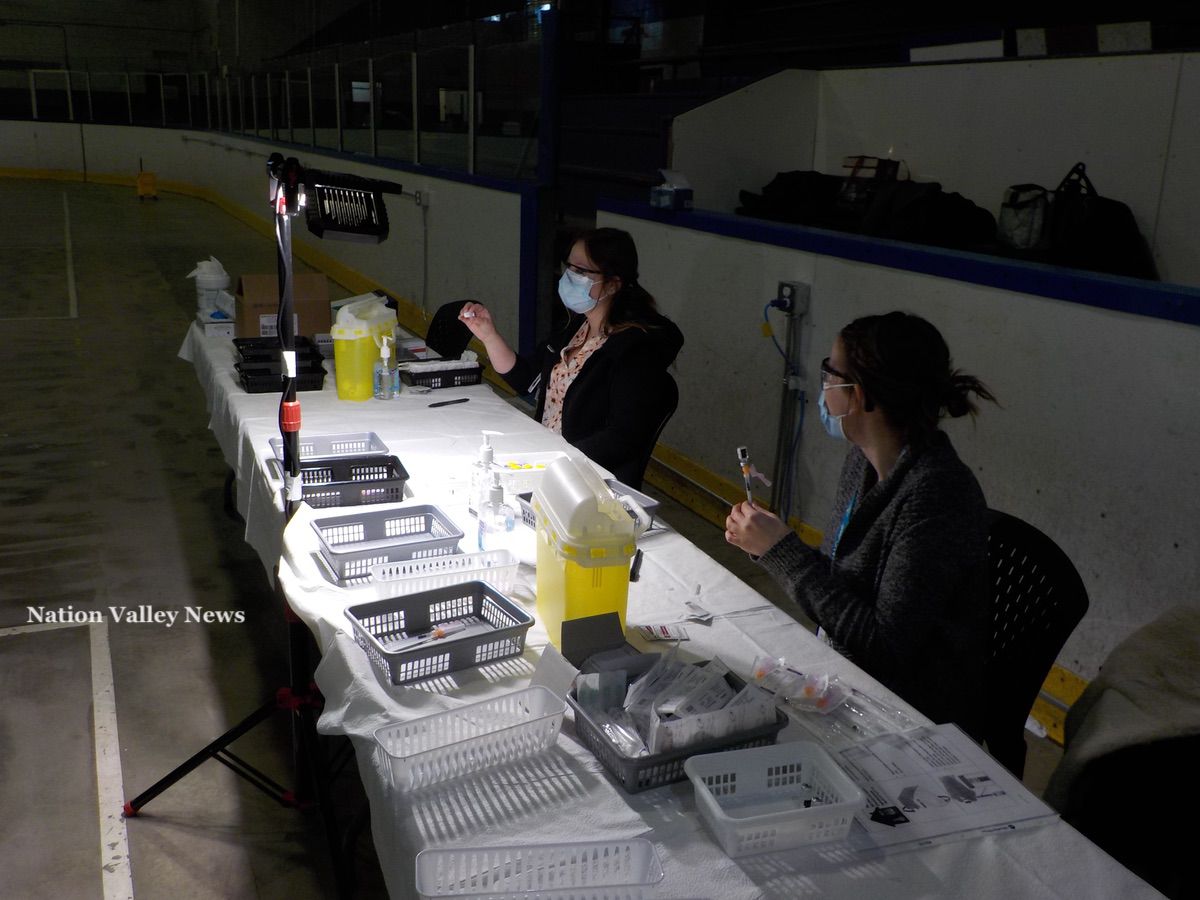 Stating his municipality was proud to contribute to the fight against COVID-19, Mayor Guy Desjardins thanked “Dr. Paul” for all of his hard work in keeping residents safe and healthy. Desjardins added that municipalities in the jurisdiction have always enjoyed “great collaboration and assistance” from the health unit.

“I encourage all eligible residents to book an appointment. The light is getting brighter at the end of the tunnel. I know that all of them, as I am, are anxious to get back to normal life.”

The man in charge of the C-19 vaccine rollout in Stormont, Dundas, Glengarry, Prescott, Russell and Cornwall said he’s pleased at this point with the amount of vaccine coming into his jurisdiction. Back in January, he felt his unit wasn’t getting its fair share.

There are now 37 clinics across the jurisdiction, 14 of them in Cornwall; four hospitals are also administering shots and Roumeliotis said he’ll soon learn how the drug store vaccination program will apply in the east. Since vaccine became available, some 22,000 area residents have received it, with another 18,000 expected to soon roll up their sleeves. He said the unit is in line for 4,800 doses a week through April.

Dr. Paul urged eastern region residents not to become complacent at this point but to gain inspiration by availability of the vaccine and continue the fight.