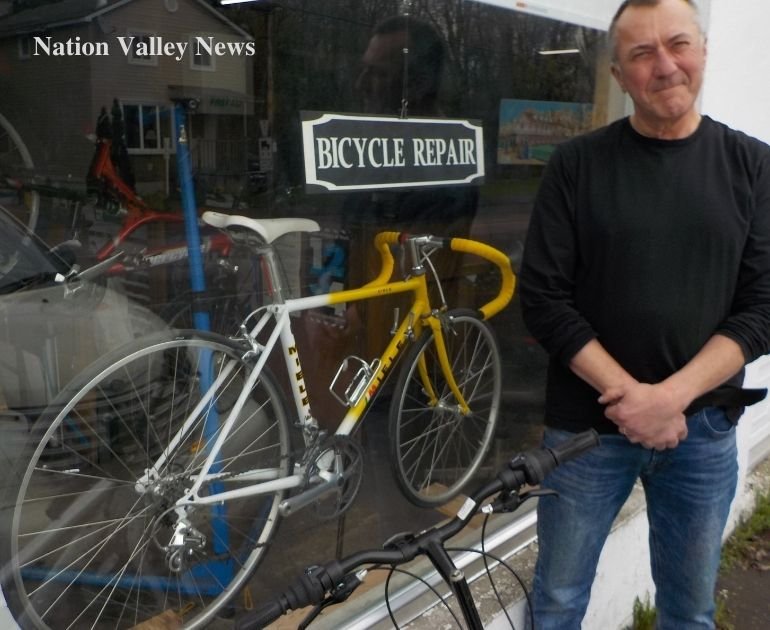 WINCHESTER SPRINGS – It’s not unusual for drivers paying attention to do a double take when passing Allison’s Feed & Farm Depot along County Road 31 in this hamlet.

There are bicycles on view in the window, bicycles in a rural feed business! That’s not the norm!  Even with the rush on bikes caused by COVID-19, most wouldn’t expect that mix. With a preference for tractors and pickup trucks, farmers aren’t known for any particular attachment to two-wheel transportation.

But most have an older bike or two hanging in the barn, perhaps that belonged to the kids and haven’t been used in years, says Kirk Allison who operates the feed business started by his grandfather in 1929. If he was still around, old R.S. Allison would no doubt be surprised; the low-key bike shop at the north end of the landmark building was all Kirk’s idea.

It spun out of 57-year-old Kirk’s love of biking as a fitness method and centerpiece in a lifestyle change. After he began doing his own bike repairs in between feed orders… well, one thing sprung to another!

Owners of bikes in the barn sometimes wonder about getting them fixed up but they don’t want to go to a lot of trouble finding someone to do it, Allison explains.

“They see that I’m repairing bikes at the other end of the building. They’re already coming in here anyway… so they drop off the old bike.”

Allison isn’t selling new two-wheelers. For an average of $40 for a tune-up – plus parts – he’s repairing customers’ bikes purchased somewhere else as an offshoot of his cycling habit. With a low-key sign on the window made up by wife Victoria and no publicity, the section of the depot he’s using for the side business was once a family operated Texaco garage.

Allison began cycling several years ago as a way along with a diet overhaul of dropping weight (85 pounds) and staying fit. He lives nearby and began going on several extended rural rides a week, adding up to 400-500 km with an extended 200 km trip in the summer. His preferred personal cycle is a world-class Cervelo R3 originally Canadian-made.

When he needed repairs, he transported his machine to an Ottawa bike shop. After awhile, he decided he could to the work himself between feed orders.

Farm Depot regulars began noticing, and he was soon asked to fix up their bikes. He is kept as busy as he wants to be with the word-of-mouth repair jobs that roll his way.

The C-19 crunch with its shortages and price hikes is affecting Allison’s as much as other bike shops. But Kirk manages to get most of the parts he needs through collaboration with other shops, particularly with Ron Cox in Winchester where he also occasionally borrows a hard-to-find wrench.

Allison can get poetic when discussing cycling, likening it to meditation, something he always does solo… and the next best thing to riding is repairing bikes, he maintains!