Bob w family – Bob Porteous (center) stands with his wife Jean and members of his family, after receiving the 2021 Community Builder Award. (Photo supplied by Township of North Dundas) 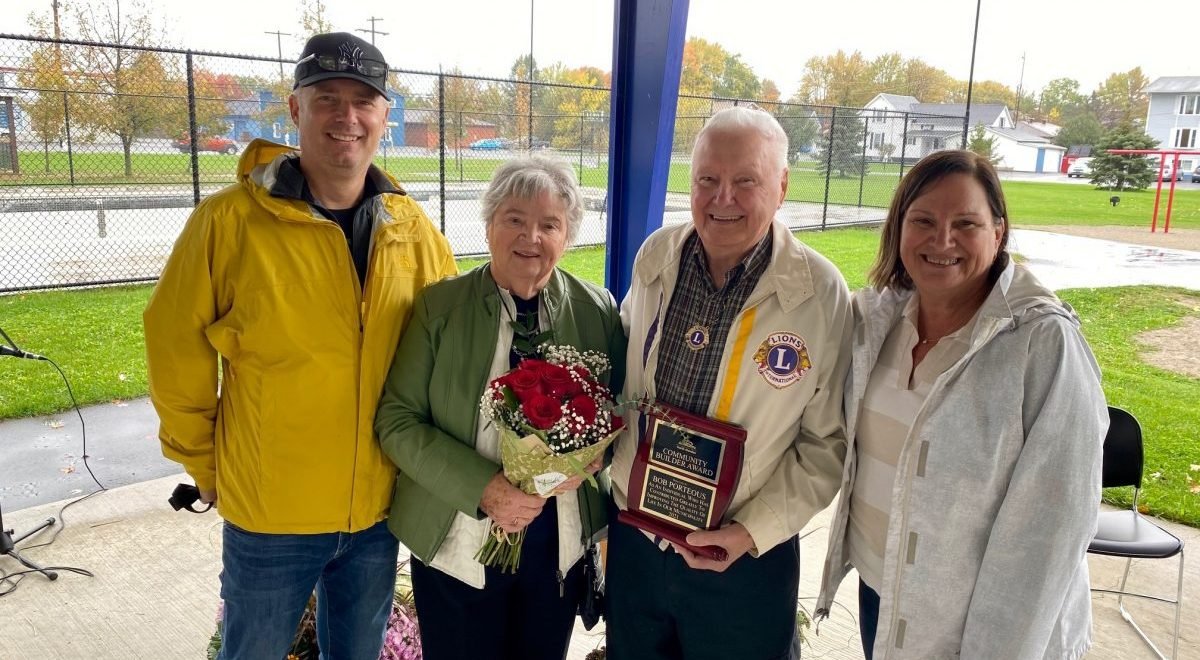 Bob Porteous and his wife Jean (center) stand with their children, Ian (left) and Laurie (right), after the award ceremony on Saturday. (Photo supplied by Township of North Dundas)

WINCHESTER — Bob Porteous is a quiet man, with a deep love for his community.

The Township of North Dundas presented him with the 2021 Community Builder Award on Saturday, in recognition of his dedication and determination spanning more than five decades.

“I am so honoured to celebrate an individual I have known and known of for over 30 years,” says Mayor Tony Fraser. “We’re here today under this lovely pavilion protecting us from the rain, due in large party to the efforts of Bob Porteous.”

He notes that many people play a role in making the community a better place to live, work and raise a family, which is why council created the award in 2008. 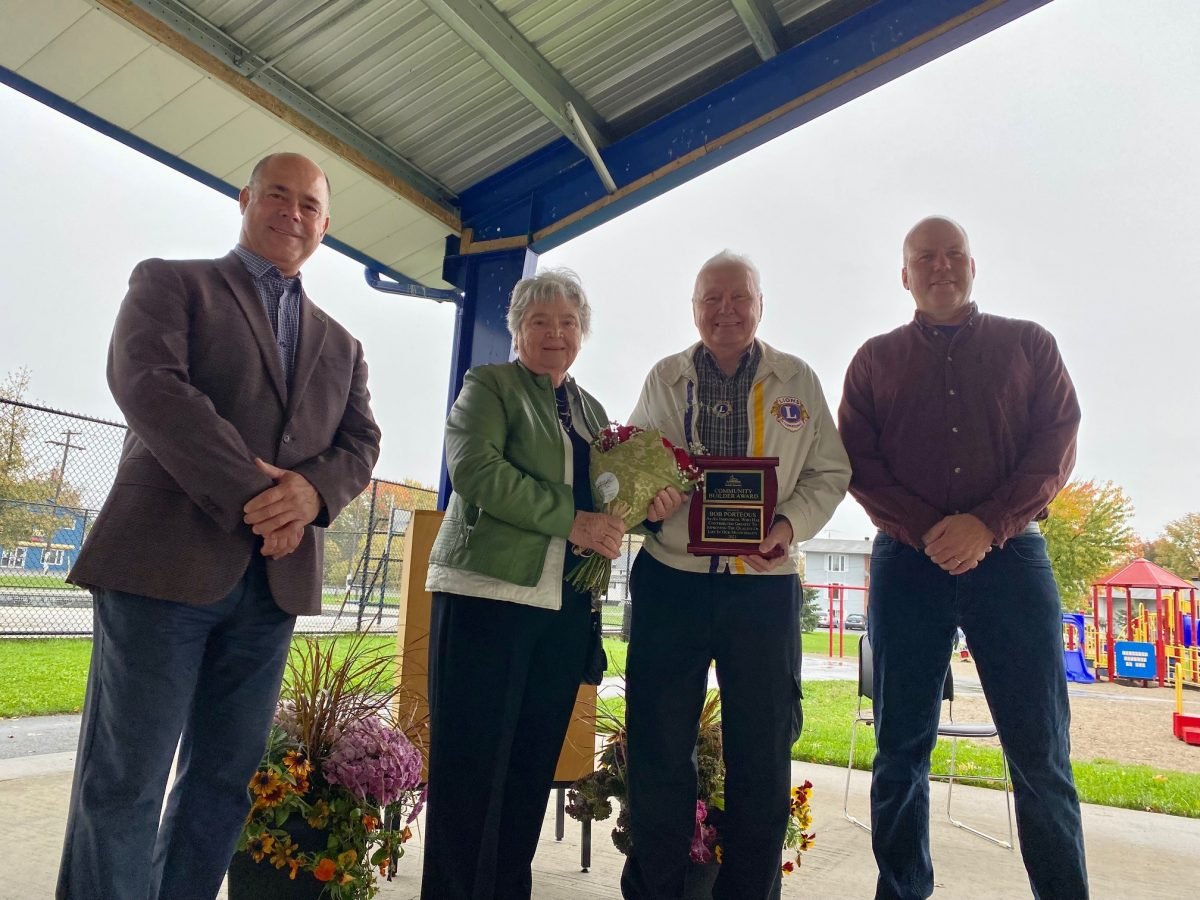 “This award is presented annually to a person who has contributed greatly to improving the quality of life for the residents of North Dundas,” notes Fraser.

Bob was nominated for the award by his fellow Winchester Lions Club member Dwayne Holmes.

“He has done so much for this community,” explains Holmes. “Bob has a way about him…he’s a quiet person, but he knows how to get things done.”

Holmes says that Bob was one of the founding members of the Winchester Lions, which started back in 1968. 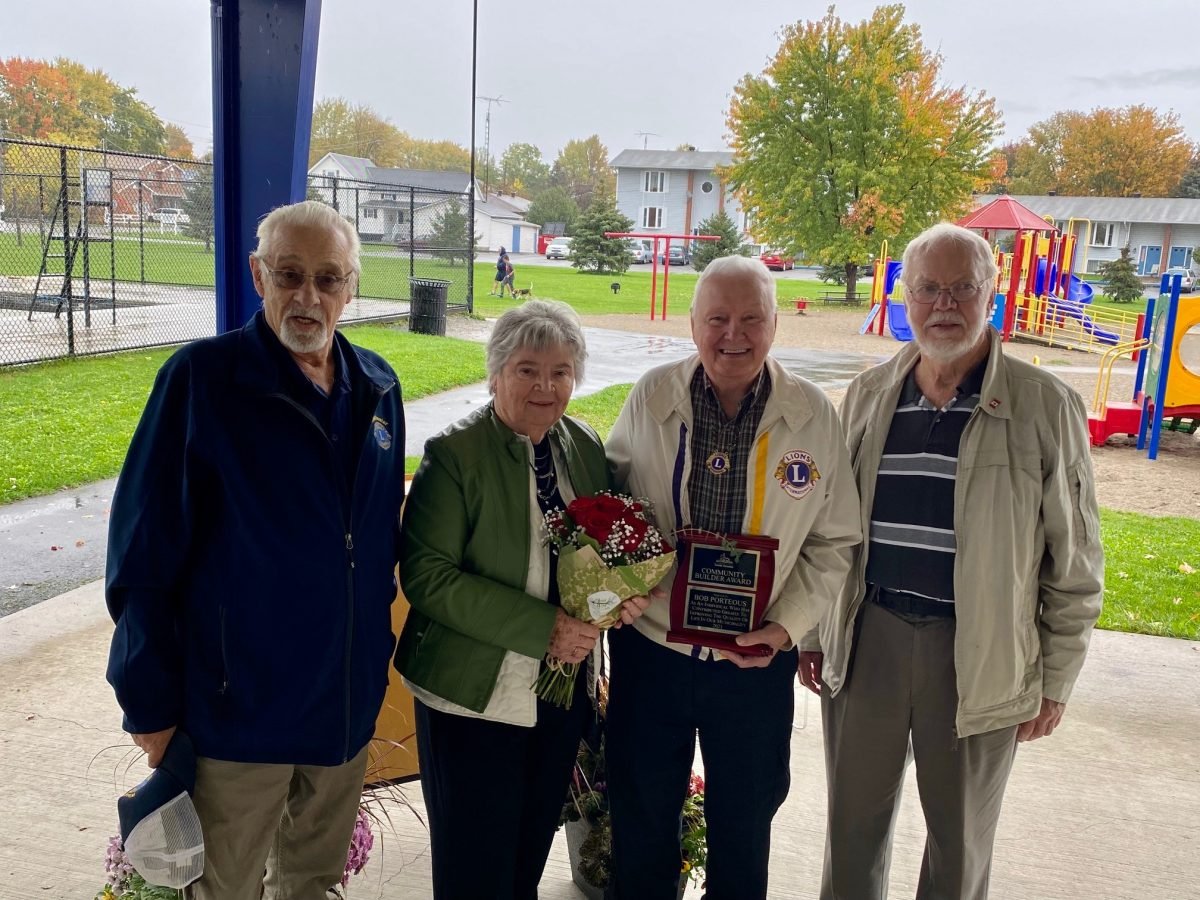 He notes that Bob was always willing to lend a hand, including coaching for the Hawk’s and putting together the monthly bulletin for the Lions. Holmes says that Bob played a role in creating or improving many community staples, such as the arena, ball diamond, pool, hospital, library and senior’s hall.

“Bob worked on getting the Trillium grant to build the former library and he was involved with getting another grant to make the Senior’s Hall accessible,” he explains. “Bob also worked closely with Bill Smirle and the committee that spearheaded the revitalization of the Old Town Hall and Theatre.

“He’s been doing these things all his life and I just thought it was time we recognized what he’s done for this community.”
Holmes recited a poem he wrote about Bob (see below) and thanked Bob’s wife, Jean, for sharing her husband with the community for so many years. 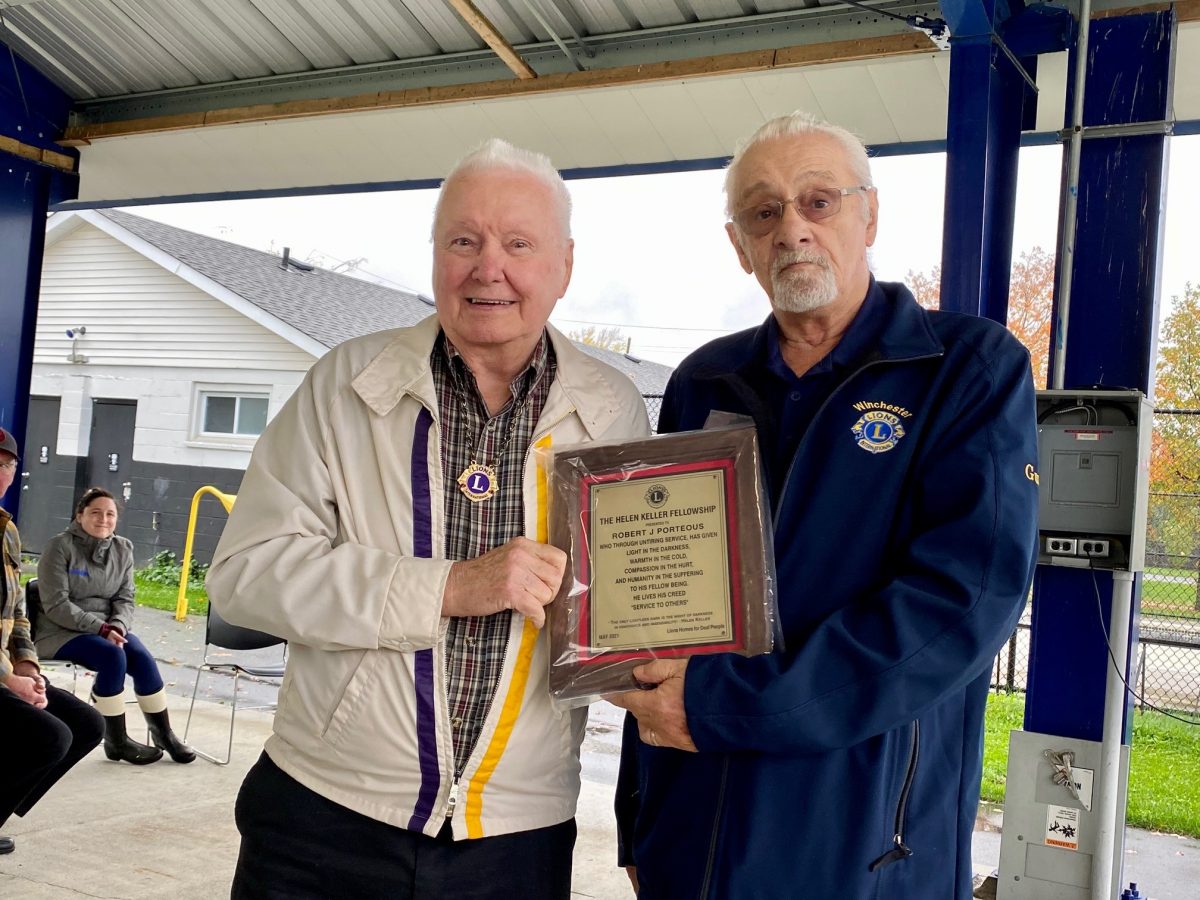 During the ceremony, Bob was also presented with the Helen Keller Fellowship Award from the Lions. Guy Belliveau, fellow Lion, read from the plaque: ‘…through untiring service has given light in the darkness, warmth in the cold, compassion in the hurt and humanity in the suffering.’

Bob says there are many community builders in North Dundas and he’s honoured to be counted amongst them. “Community is a group of people working towards something,” says Bob. “In your community, everyone contributes in some way.” 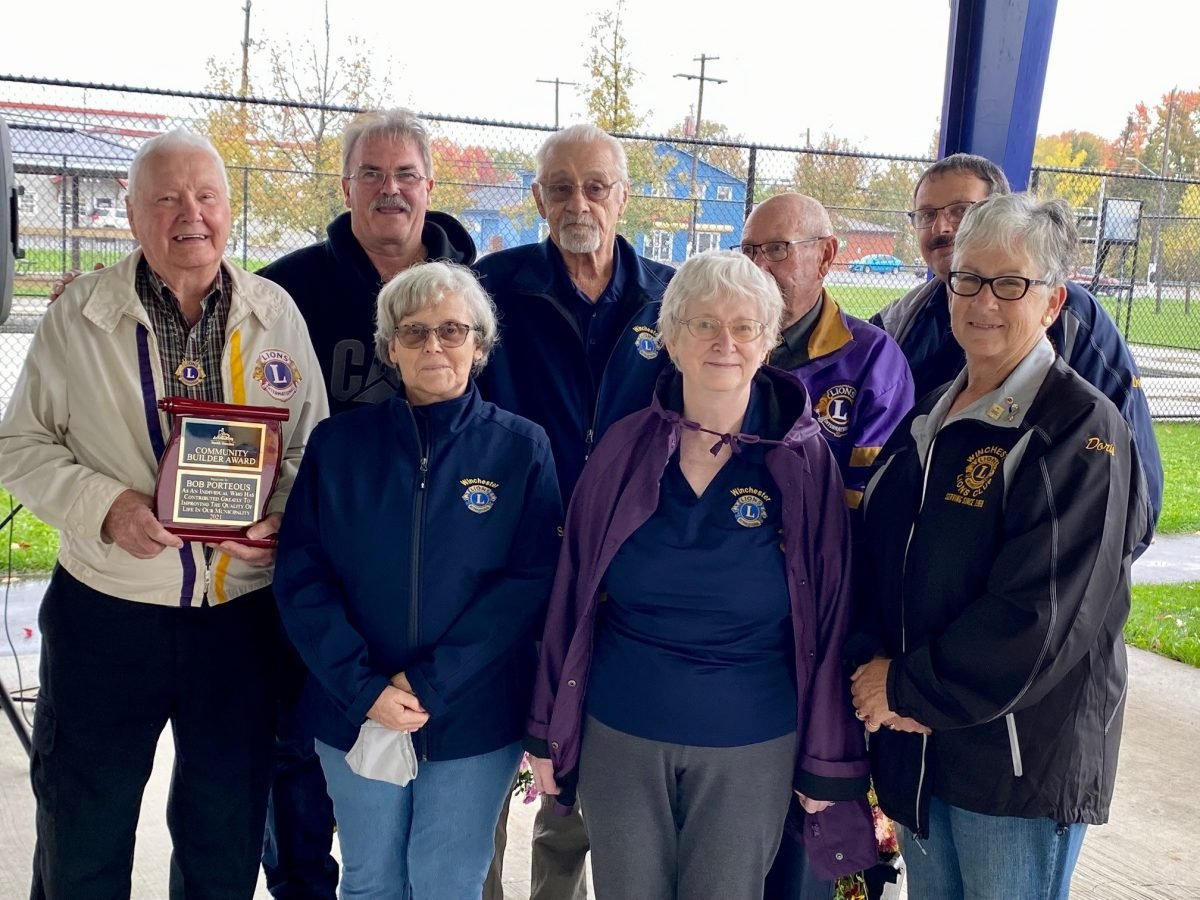 Bob Porteous (left) stands with the members of the Winchester Lions Club after receiving the 2021 Community Builder Award. (Photo supplied by Township of North Dundas).

Eighty years have gone since early one morn,
On Harmony Road, a young lad was born.
Grew up on the farm, but being no fool
Got educated at Winchester High School.

Met Jean Kerr and soon they were wed.
Before you know it, there were kids to be fed,
Worked at Ag Canada to earn his keep.
Bought a house on York St., a place to sleep.

For a few years he coached kids playing ball.
I heard he never disputed a call.
He then became the Hawk’s Assistant coach
Later on the Exec, he used a different approach.

In 68, helped Lions get started
And for 53 years has never departed.
The Arena, a ball diamond, a pool for a swim
The needy, the blind, important to him.

For our hospital, almost half a million.
In later years, the Lions’ Pavilion.
Got a Trillium Grant, built a library for all,
Attached to the new Lions’ Senior Hall.

Served as President and on committees galore,
Many years as Secretary, gave so much more.
Taught many a young Lion in how to lead.
When he prepared, all they had to do was read.

The monthly bulletin he did so well,
At keeping us informed he did excel.
Encouraging words or inspiring quotes
Made Lions proud of what he wrote.

Another Trillium Grant, he carried the ball,
In making the hall accessible to all.
Helped the Town Hall group apply for a grant.
Talked to Council explaining our want.

Best bulletin one year in District A-4
Of the 70 clubs from Gan to Quebec shore.
A Melvin Jones Fellow, top Lions regard,
A member for life and Helen Keller Award.

For a few years Bob headed south for the sun,
Played golf and just plain had some fun.
Health concerns have since kept him here,
And he again works for Lions all year’

Thinking of moving closer to be near their son,
I’m sure Bob’s new career has just begun.
He has served this community in so many ways
He will be remembered by us for the rest of our days.